I was looking forward to the final stop on the refuge tour, Chincoteague National Wildlife Refuge, as I had seen a ton of wildlife there a couple of years ago on a winter visit. But the afternoon I arrived, it was gray, rainy, and windy. Turns out the theme of the next 24 hours was gray and misty. I decided to wait until the next morning to venture in and the first critter seen was a large gray squirrel that wasn’t a Gray Squirrel – it was an endangered Delmarva Fox Squirrel.  It is roughly twice the size of our Gray Squirrel and lives in mature forests of mixed hardwoods and pines with a closed canopy and open understory. Habitat loss and probably over-hunting contributed to population declines that led to this species being placed on the Endangered Species List. From 1969 to 1971, biologists relocated 30 Delmarva Fox Squirrels to Chincoteague NWR and released them. The population of squirrels at the refuge has since grown to over 300  and Chincoteague  remains one of the best places to see this beautiful animal.

Driving on I could see a gathering of white birds in a roadside marsh channel. There were a half dozen Snowy Egrets running around catching something and interacting with one another when one egret would impinge on another birds’ space. I pulled over to a nearby safe spot and the birds could have cared less. 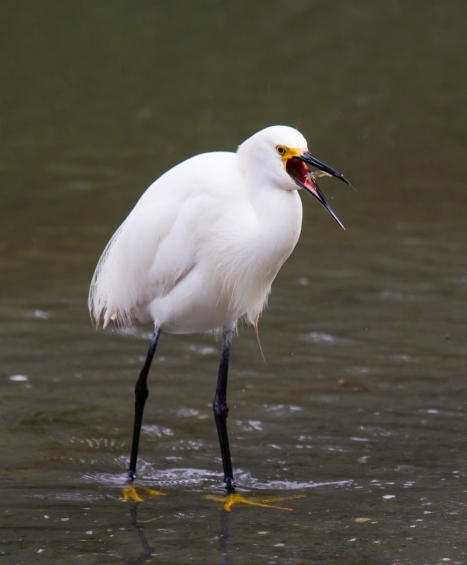 Turns out there was shrimp for breakfast! The tide was moving water rapidly in the channel and shrimp were flowing with it past a shallow spot that made for easy pickings for the sharp-eyed egrets. They were all dashing about, grabbing and swallowing shrimp.

A couple of the egrets were apparently higher on the pecking order and would fluff up their feathers and chase other birds away anytime they would get into a prime shrimping spot so there was a lot to see and photograph. Crest raising is an important threat and territorial display in egrets and one guy in particular was using it to the fullest.

Just down the channel a Great Egret stood on a fallen tree and was making itself more presentable for the tourists. It was methodically preening every feather, including the long nuptial plumes, or aigrettes. Early in the breeding season adults grow long plumes on their backs, which they raise in courtship displays. Those plumes were considered fashionable for ladies’ hats in the late nineteenth and early twentieth centuries and, shockingly, it is estimated that more than 95 percent of the Great Egrets in North America were killed for their plumes in those decades. In 1903, plume hunters were getting $32 an ounce for the ornate feathers. Plume-hunting was banned, for the most part, around 1910, and Great Egret populations started to recover. The Great Egret is the symbol of the National Audubon Society, one of the oldest environmental organizations in North America, which was founded to protect birds from being killed for their feathers. 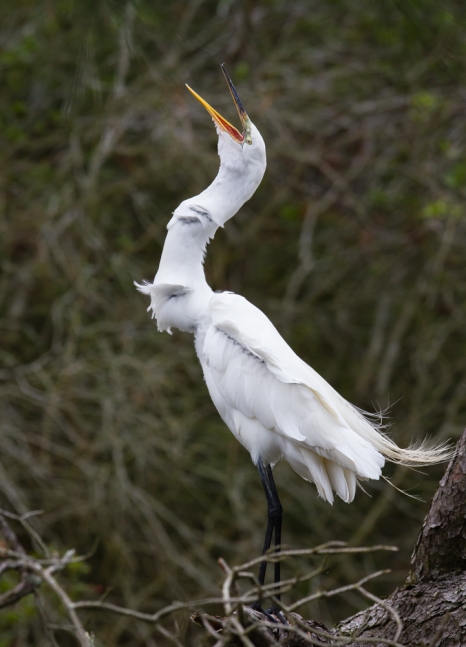 I watched this bird delicately preen itself for many minutes before it made one quick move that showed it was not all grace and elegance. I’m betting it wishes the shutter had not been firing at that moment.

During a brief few minutes of sunshine, I walked part of the Wildlife Loop, a paved 3.5 mile  loop through managed wetlands that is kept closed most of the day for hikers and bicyclists to enjoy and then opened for cars later in the afternoon. It is a great place to see a variety of wildlife and it started of with a Bald Eagle flying overhead. Next, a gorgeous male Blue Grosbeak jumped out of the grass. Then, uncharacteristically for this species when it is anywhere close to me and my camera, it landed close enough and stayed long enough on a perch for me to grab a few quick shots.

Driving back out toward the beach I came across a flock of Black Skimmers resting on a shallow sand bar. They are such comical-looking, yet beautiful, birds. As I have mentioned before, they ae a favorite of mine, so I spent the last hour of my time on my “refuge tour” hanging out with the skimmers, trying to capture their beauty and precision as they sliced through the shallow water searching for a meal. 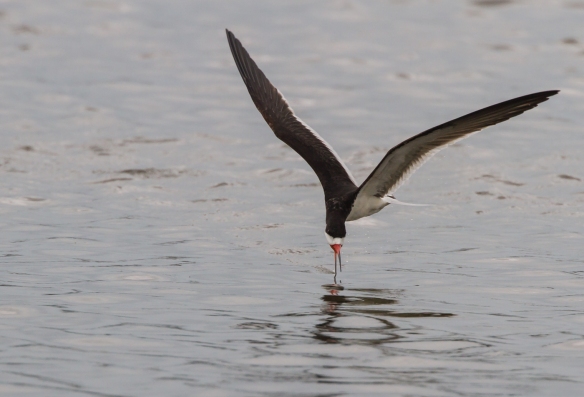 Check out the lateral compression of this bill – it really looks like a knife blade slicing through the water. 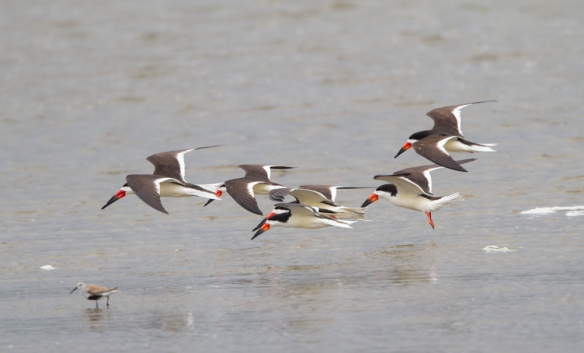 Black Skimmer in black and white (click to enlarge)

My time in a few of the refuges of NJ, DE, and VA was awesome but now I am headed to my favorite place on the planet, Yellowstone, for a couple of weeks. I imagine the blog posts will be less frequent and perhaps a bit shorter due to limited internet access and cellular service throughout much of the park. But I’m sure I’ll have some images and adventures to share when I return.

7 thoughts on “Chincoteague was Misty”