…it seems to vanish mysteriously, skulking in some sheltered nook, with only its bill above water, well deserving its common name of “water witch”.

Dabchick, Hell-diver, Water Witch, Podilymbus podiceps – all names for a diminutive water bird now known as the Pied-billed Grebe, or simply PBG. These are the the most widespread and common of our grebe species. They prefer freshwater habitats and are most likely seen in North Carolina in the cooler months.

Their winter dress is pretty drab – brown back with a lighter belly, indistinct eye ring, a whitish throat, and a short, tan, chicken-like bill, usually with no stripe.

Occasionally, I see winter birds with hints of their breeding plumage, in this case a faint bill stripe, and a darkened throat patch. 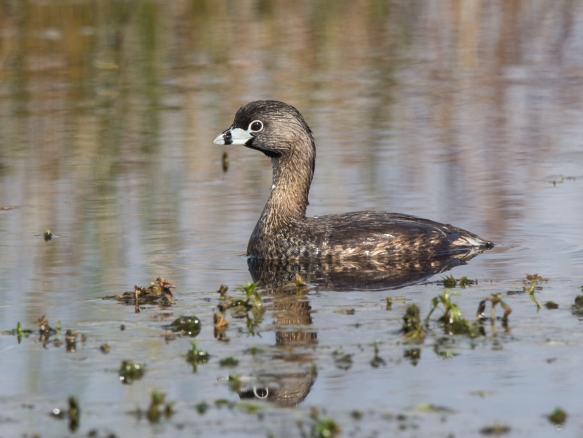 This weekend at Pungo, I saw a couple of PBG’s in their breeding plumage – bluish-white bill with a dark vertical stripe, a bold white eye ring, dark forehead and a very dark throat. They were in one of the marsh impoundments managed by the refuge for waterfowl.

There were several American Coot feeding on aquatic vegetation (they will also eat aquatic invertebrates and small vertebrates such as tadpoles and small fish). Mixed in amongst them were a couple of Pied-billed Grebes. They feed on almost any small aquatic organism they can catch including fish, crayfish, tadpoles, and large aquatic insects. I have watched PBG’s dive and surface with a decent-sized fish and they sometimes struggle to subdue and swallow it. Their diving behavior when feeding is pretty typical – a head-first surface dive. 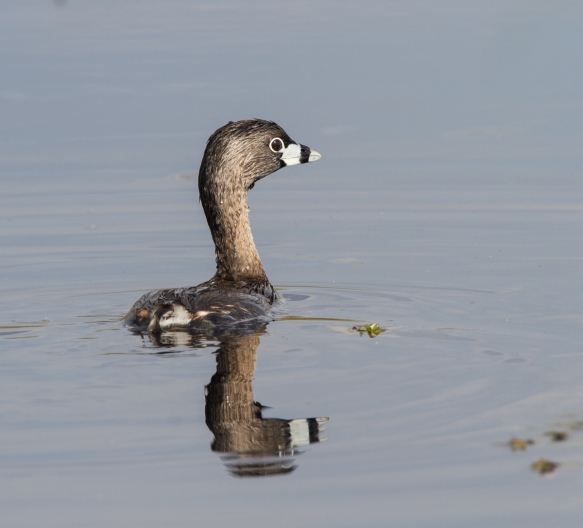 Pied-billed Grebe skulking away when disturbed

But when disturbed by a potential predator (or guy with a camera), they rarely fly, and often skulk away, slowly sinking into the water, instead of a using a more vigorous dive.

Both of the birds I saw this weekend exhibited that behavior, and in an expert manner. Noted ornithologist, David Allen Sibley, describes this behavior – “by contracting their abdominal muscles and thereby compressing their plumage, while at the same time exhaling, small grebes can submerge themselves from a resting posture on the water’s surface without diving. In this manner they can adjust their buoyancy, for hunting or concealment from predators; small grebes are often seen with only the head or bill above the surface.”

Pied-billed Grebe with only its head above the water

I had seen the submarine behavior in winter, but have never witnessed them with just their head above the water surface until this trip. After sinking once, one bird surfaced with just its head showing. This individual was well out in the water a fair distance from me. It gradually moved slowly away from me in this partially submerged mode.

Later, two different birds showed me their amazing ability to disappear. I was looking at some frogs from my car when I noticed a slight motion in the water near the road edge. It was a PBG head staring at me from less than ten feet away – just the head above the water. Before I could get the camera on it, it sank. I waited, hoping to get a closer image similar to the one above. Nothing. I waited. Nothing. I was watching the nearby aquatic vegetation, assuming I could see the escape route of the PBG by movement of the vegetation. But nothing moved. I waited about five minutes and moved on, figuring I had just missed its escape somehow. A few minutes later, I saw another one close to the road edge. It, too, sank before I could get the camera in position, and again, I waited. To my amazement, even after 10 minutes, I could not find any trace of the water witch. Perhaps, as I have read since returning, they both surfaced next to some piece of emergent aquatic vegetation, with just the tip of their bill showing, allowing them to breathe while remaining hidden. I must admit to being frustrated by being fooled by something with a name like hell-diver. If they are still around later this week when I am with a client group (this species is on record as occasionally nesting in NC), you can bet we will spend some time with several sets of eyes looking for that bill tip poking out of the water.