What makes a place special is the way it buries itself inside the heart, not whether it’s flat or rugged, rich or austere, wet or arid, gentle or harsh, warm or cold, wild or tame. Every place, like every person, is elevated by the love and respect shown toward it, and by the way in which the bounty is received.

You all know by now how I feel about Yellowstone and its extraordinary wildlife. But, I have learned that every place can be special if you take the time to look closely and appreciate what the place can give you. My last post was about the wilds of my garden, a place with much in the way to offer in terms of interesting creatures, although most are admittedly a bit on the small side. So, when I want a wildlife fix back in North Carolina, I usually head to that other place you have seen me blog so much about – Pocosin Lakes National Wildlife Refuge.

So, when I woke up a bit too early Monday, I decided, what the heck, I think I’ll drive down to Pungo and see what I can see. I arrived about 8:30 a.m. and spotted my first bear within a few minutes. It was a bit unusual-looking in that it was distinctly brownish in color. While brown-colored Back Bears are common in Yellowstone, they are not in the East. I have seen this coloration a couple of times at Pungo on bears in their summer coat, which is probably much thinner than the winter one, so some of the color may actually be due to their skin showing through. 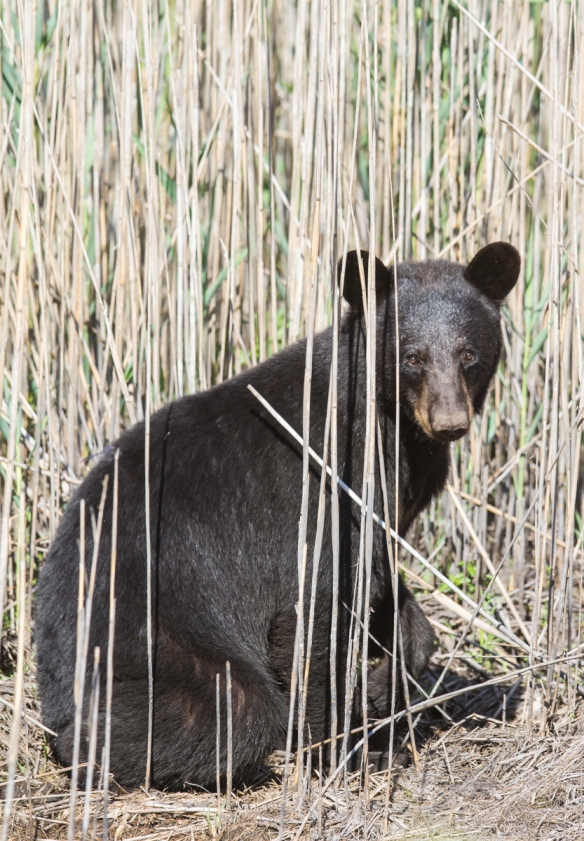 After passing two more bears, I drove by a bear that stood up in a patch of reeds along a canal when it saw me. Not wanting to spook it, I kept driving past and then did a three-point turn, before heading back for a photo attempt. The bear had dropped back to a sitting position and stared at me when I pulled to a stop across the canal. I snapped a couple of quick images before the bear slowly turned away and walked back into the forest. I started to make another turn as it walked away to resume my drive when I noticed something in my rear view window. But I’m going to make you wait until the next post to find out what I saw,

After driving around the refuge for a couple of more hours (and chatting with a friend that frequents Pungo even more than me), I decided to head over to Alligator River National Wildlife Refuge to check things out. The heat and the abundance oi Deer Flies had convinced me this might be a good day for a driving tour instead of a lot of hiking. So, off I went, making a detour to get access to roads leading through another section of Pocosin Lakes (budget cuts have hampered the road maintenance on the refuge so some roads are closed requiring a long drive around outside of the refuge). That part of the refuge produced another couple of bear sightings, plus two White-tailed Deer and a Raccoon.

As soon as I drove onto one of the dirt roads at Alligator River, I spotted a bear. It was a young one (2 or 3 year old most likely) and it was slowly walking through one of the refuge soybean fields, chowing down on the leaves as it went.

As I watched, another group of black blobs moved in to the field from the adjoining woods and walked through my view finder behind my bear. It was a sow and two young from a previous year. They slowly moved across, grazing on soybean leaves, until they reached the tree line. One stayed out in the field eating, but, it too, finally headed into the coolness of the shade. My bear count for the day was growing, 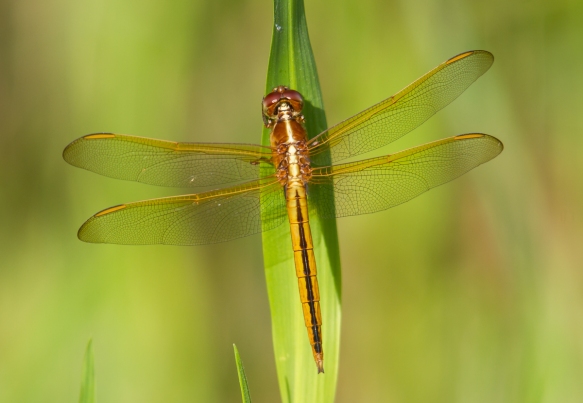 Dragonflies were constant companions on the refuge

In addition to the abundant Deer Flies, I saw plenty of other insects on both refuges. Dragonflies were everywhere, hopefully catching some of the biting flies that streamed into the car every time I opened a window or door. A particularly common species was the one shown above – I think it is a Needham’s Skimmer, since I have photographed the bright red adult males in this location in previous summers.

I was hoping to see some snakes out and about on this hot day, but, surprisingly (and sadly), the only snake I saw was a roadkill Canebrake Rattlesnake at Alligator River NWR. 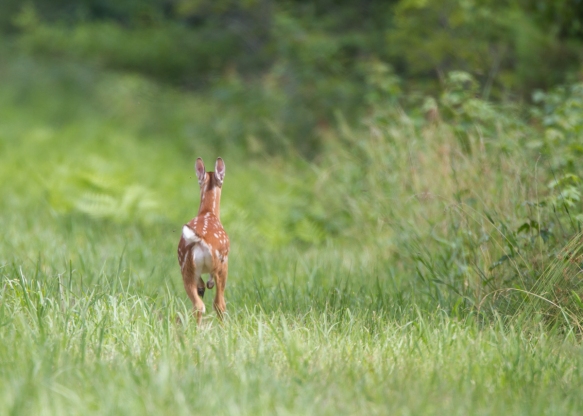 As I came around a curve I spotted a fawn, which immediately took off running, foiling any attempt at a decent photo.

Fawn starting to come back across the road

Suddenly, the fawn stopped and walked across the road. It turned and paused, allowing a few quick pictures. 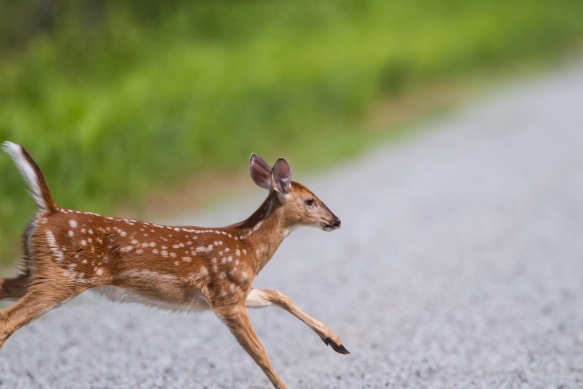 I had the 500 mm lens plus a 1.4 teleconverter to get a close image. That was fine until the fawn took off across the road, managing to jump out of my frame every single time. Less can be more I suppose. 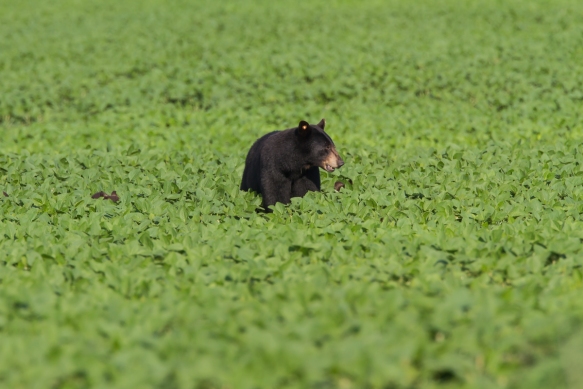 The low angle sun was reminding me of the 3+ hour drive home, but it was soooo nice after the heat and noticeable atmospheric interference of most of the day. On the way out, I stopped where I had seen the first bears on this refuge a few hours earlier. It did not disappoint. There was a bear in one field that had bright yellow ear tags. I have seen a couple of bears on the refuge with ear tags from someone’s research in past years. When I stopped, she looked up and quickly walked over to the edge of the field into the taller vegetation. I moved on and when I came back a few minutes later, she was back in the field eating. But this time, I saw something I had missed in the first sighting.

Tagged bear with her three cubs

She had three tiny cubs in tow. They were small enough that they were pretty well hidden in the soybeans until they lifted their heads or stood up. 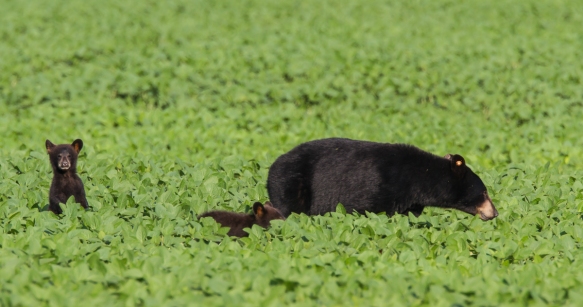 They stuck close to their mom as she maneuvered through the field. Finally, she gathered them and headed back toward the edge, perhaps a bit frustrated with the guy in the car across the canal.

Bear cub getting one last look at me

The day ended on a high note with the last cub in line standing “tall” and looking my way. It finally dropped and left a wake of soybean tops waving in its path as it rejoined the rest of the family. For what started as a spur of the moment trip, it had turned out to be an incredible day for wildlife – the final mammal count for both refuges was 24 Black Bears, 4 White-tailed Deer, 2 Raccoons, and…something else I will tell you about in a future blog. A good day, indeed, in the wilds of North Carolina.

6 thoughts on “The Wilds Close to Home”