In Nature’s infinite book of secrecy

A little I can read.

I can read only a little, especially in the chapter on a new found interest, moths. They keep showing up (of course, I keep looking). I now have a routine of checking the screens before retiring for the night to see what might be out there. Usually, some small, tough to photograph, and even tougher for me to identify, specimens. But, every few nights, something really spectacular makes an appearance. One night last week, two large, and exquisitely patterned individuals found their way to my screen door.

The first was hard to ignore – a large (wing span of over 3 inches) fluttering moth with bold stripes on the underside of the hind wings. I suspected one of the Underwings, but had not seen one with primarily black and white colors on the underside before. 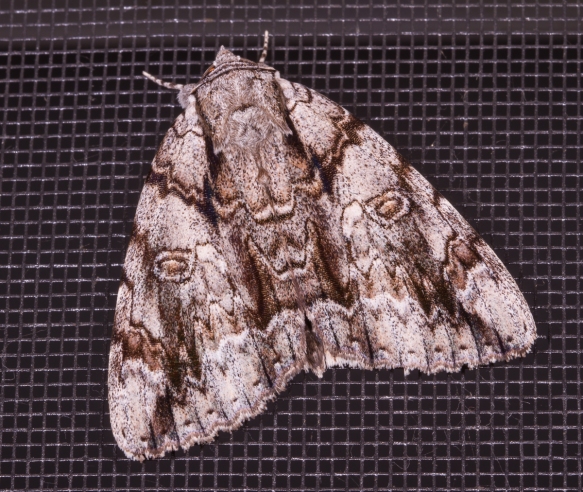 After a quick photo of the moth through the screen, I went out to find an intricately patterned beauty. It turned out to indeed, be one of the Underwings, Genus Catocala. This one is called the Widow Underwing, Catocala vidua. The group is so named because the genus name means “beautiful below” in Greek. Most have bold colors on their hind wings, which are usually only revealed when the moth is flying or startled. In this case, the hind wings are mainly black and white, but beautiful nonetheless, both above and below.

Close up of wing pattern of Widow Underwing

The muted colors and intricate pattern of the dorsal surface of the forewings most likely serves this moth well when resting on tree bark in its habitat of deciduous forests. Larvae feed on leaves of hickory, walnut, and a few other tree species.

Nearby, but much more subdued in its activity, was another beautifully patterned species.

This one was also relatively easy to identify – a Lunate Zale Moth, Zale lunata. Smaller (wing span about 2 inches) than the first moth, it was equally intricate in its wing design, again mimicking tree bark, but perhaps with splotches of lichen. The lunate part of its name refers to the crescent-shaped splotches along the wing edges. But, in looking at various online sources, this species can be quite variable, so I am glad this one had prominent white splotches along the wings to make identification a bit easier. Larvae feed on a variety of shrubs and trees.

Looking closely at the patterns of these two moths helped me realize the incredible beauty and diversity of this group of insects and just reinforces my desire to learn to read more of the pages in this chapter of Nature’s book.

NOTE: When I finished writing this post, I went out to check the screens and was rewarded with a bonus – a large female Imperial Moth (measured wing span of 5 inches)…hoping she lays eggs on nearby trees.