…a wonderful creature, when we consider his form, nature and disposition…he is never known to strike until he is first assaulted or fears himself in danger, and even then always gives the earliest warning by the rattles at the extremity of his tail.

I made some time last week to do a day trip down to eastern North Carolina for some wildlife viewing. Spent the morning at the Pungo Unit at Pocosin Lakes NWR, but saw only a few butterflies and birds, along with a friend from the area. We chatted for awhile and exchanged notes on our lack of wildlife encounters that morning. After that, I decided to head over to Alligator River NWR and see what might be moving around over there. I did eventually spot a couple of bears and some cool insects (more on the bugs in a later post). I also came across a roadkill Cottonmouth. It saddens me anytime I see animals hit by cars, but especially on these wildlife refuges, where the gravel roads, and the purpose of the place, should slow people down enough that they can avoid most animals before making them a casualty. I was headed out for the long trip home when I came across what looked like another roadkill snake. As I opened the door, I thought I saw a flicker of movement, so I got out and took a closer look.

I could see it was a small rattlesnake, about 13 or 14 inches total length. It had flattened its body but was not moving. I grabbed a twig from the roadside and gently touched its tail…the head jerked toward the twig. The little guy was alive after all. The grayish color and small size at first made me think this could be a Pygmy Rattlesnake, a species of small rattler found primarily in this part of the state. But the pattern didn’t seem right from what I remembered seeing before. It took comparing the images with some field guides and consulting a herper friend when I got back, to confirm that it was, instead, a very young Canebrake Rattlesnake, (Crotalus horridus). Canebrakes are what most people call the Timber Rattlesnakes that are found in the Coastal Plain. Those in the Coastal Plain tend to be lighter in color than those in the mountains and usually have an orange or brown stripe running down the middle of the back.

After reading more about this species, I think this one could have been a very young Canebrake. Females typically give birth in August or September, to anywhere from 4 to 20 young, that average about 13 or 14 inches in length.

Closeup of head and button of young Canebrake Rattlesnake

Young snakes usually have very conspicuous body patterns and an enlarged button at the end of their tails instead of the segmented rattle of larger specimens. 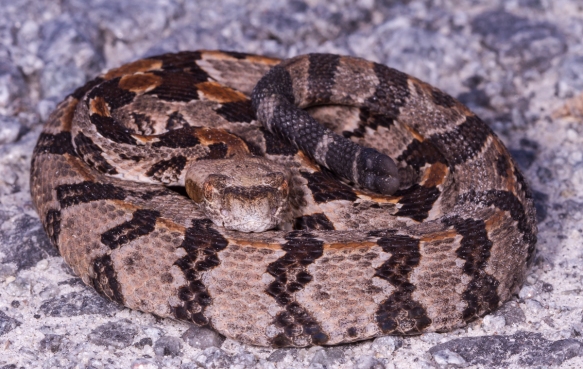 As I gently nudged the snake back toward the woods with the twig, it occasionally curled up in a defensive posture, but never struck. When it finally reached the vegetation, it picked up speed and disappeared into the thicket. It was a privilege to see this, my first young rattlesnake, and to ensure that it made it at least one more day in what could be a long life. Studies have shown that female Timber Rattlesnakes may not reach sexual maturity for 5-10 years and then may only have young every 3 or 4 years. Populations are believed to be declining throughout much of their range due to habitat destruction and human-related activities, so I’m glad this one is in a relatively safe habitat…maybe I’ll see it again on a future visit.