My wildflower garden is between seasons right now, so color is hard to come by. The whites, light blues, and pinkish-reds of spring’s onslaught of ephemerals and early bloomers has passed, and the bright yellows, oranges, and kaleidoscope of colors of summer flowers has not quite exploded onto the scene. This is especially true in my largely shaded yard. There are few openings in the canopy and the understory is in its jungle-takeover phase, especially with the recent rains. So, green is the dominant color out my windows right now, lots of it. But, if you look around some of the edges, where there is some dappled sunlight filtering in at least part of the day, you will see a hint of color.

As you get closer, the faint glimmer transforms into a fiery combination of scarlet and yellow.

These are the flowers of an uncommon wildflower, Spigelia marilandica. It goes by many common names – Indian Pink, Woodland Pink Root, Worm Grass, most of which refer to its use by Native Americans as an effective treatment for intestinal worms. All parts of the plant contain a poisonous alkaloid, spigeleine (a compound related to strychnine), which gives the plant its medicinal properties and makes it toxic if too much is consumed.

The flowers are arranged in an unusual manner on an arched, one-sided spike at the top of the plant. There is a swelling a little over midway on the flower, and then the tip splits into five bright yellow petals when it opens. One field guide described the flower buds as resembling bowling pins sharpened to a point.

The color combination of scarlet and yellow is eye-catching

Flowers can be self-pollinating, but Ruby-throated Hummingbirds are known to pollinate these plants. In fact, it is listed as one of the top ten native plants for hummingbirds by Operation Ruby Throat in South Carolina. Spigelia is apparently more common in that state. The only place I have seen this delicate flower in the wild is in Great Smoky Mountains National Park. The plants in the yard were obtained from the NC Botanical Garden in Chapel Hill, a great place to learn about and purchase native plants. 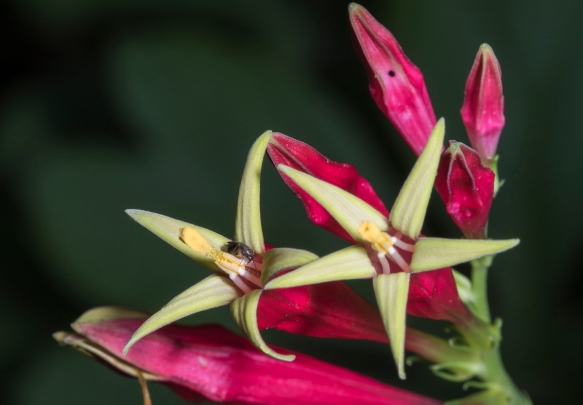 I read that the seed capsules swell and then split open, shooting the seeds away from the plant. This gives me another reason to appreciate this fiery beauty, and something to look for later this summer. It is becoming increasingly apparent that I could never leave the yard and still have so much to see and learn from nature.

2 thoughts on “A Fiery Combination”