The moment one gives close attention to anything, even a blade of grass, it becomes a mysterious, awesome, incredibly magnificent world in itself.

Something caught my eye yesterday as I walked toward the house along the stone steps. It was on the tip of a leaf of one of the wildflowers yet to bloom. 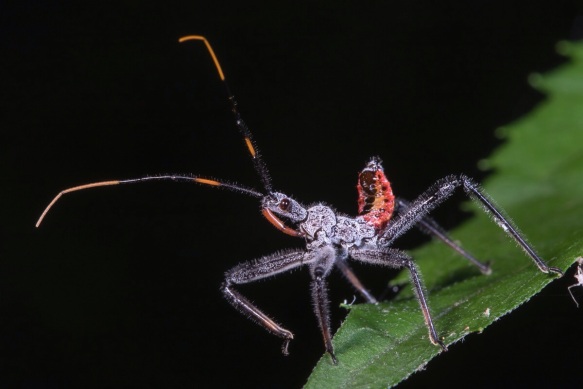 A tiny hunter positioned on the tip of a leaf, waiting for what may come its way (click photos to enlarge)

I believe it was a juvenile Assasin Bug of some sort, most likely the Wheel Bug, Arilus cristatus. 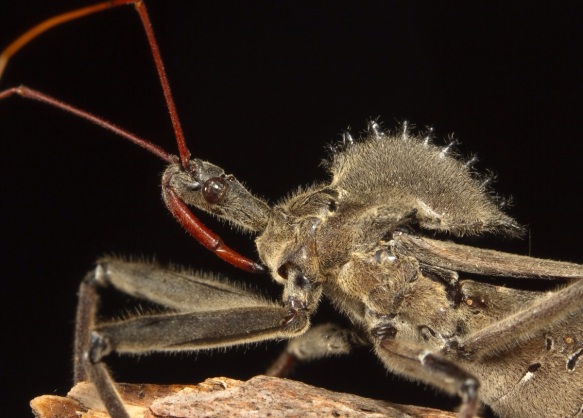 Adult Wheel Bugs have what looks like half of a toothed gear (or wheel) attached to their back.

The nymphs of Wheel Bugs lack the unusual wheel or crest that gives the adult its common name. From what I have read, no one is quite sure of the purpose of this unusual anatomical feature. 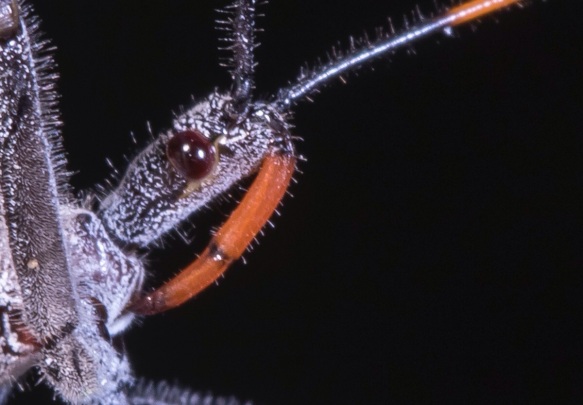 The nymph does show the characteristic piercing – sucking mouthpart of Wheel Bugs.

Though lacking the namesake wheel, the nymph does share the diagnostic mouthparts of the adult Wheel Bug. All True Bugs (family Hemiptera) share these elongate, beak-like mouthparts.  Wheel Bugs are voracious predators, taking all types of insects and other invertebrates, large and small. When they encounter a potential prey, they grab it with their front legs and stick their hypodermic-like beak into the organism, injecting it with saliva. This juice contains a toxic, paralytic substance that immobilizes and kills the prey within 30 seconds.  The saliva also contains enzymes which help dissolve the insides of the victim . After that, the predator sucks out the body fluids of its quarry.

And the defensive bite of an adult Wheel Bug can be quite painful for humans as well. They are not aggressive but will bite in self-defense if accidentally grabbed or pushed against. It feels like a really bad bee sting. 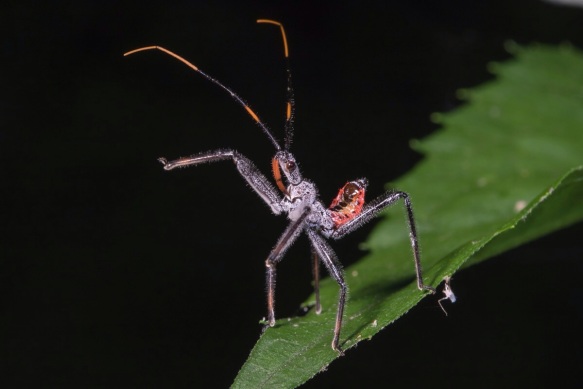 The tiny warrior reacts when I get close with the macro lens.

When I brought the macro lens close for a shot, the little guy was defiant, or curious, not sure which.  Either way, it was fascinating to look closely at this creature. Wheel Bugs supposedly have only one generation per year (the picture of the adult was taken in September a couple of years ago). The eggs overwinter and hatch in spring.  I will keep an eye out for them as they molt and mature the next few months.  If any reach that “armored vehicle” stage of adulthood (and they are large as adults, over one inch in length) I will try to share some close-ups of this fascinating garden neighbor.