The night has a thousand eyes, And the day but one…

Night time, a special time to be outside. I remember giving night programs as a District Naturalist for NC State Parks and how it seemed my audience was always a bit more attentive at night than during similar day hikes. I think it has something to do with most people’s lack of comfort in the outdoors after darkness has fallen over the landscape. We are not creatures of the night, like so many others, those thousand eyes out there. But I like to go out with flashlight in hand (a crutch for us diurnal critters) and explore the world of darkness in these woods. It is often a new cast of characters, or at least some that take center stage more than when the sun is high. National Moth Week gave me an even better excuse to wander after dark, but on any nocturnal saunter, there is something to see (and hear). Here are a few of the night shift found on a recent stroll through the yard.

I had been watching a Red-spotted Purple caterpillar (Limenitis arthemis) for a few days on a small Black Cherry tree out back. All phases of the larval (and even pupal) life of this caterpillar are considered bird poop mimics, with a white saddle on a darker background. As they grow (this one is the last instar I think) they even look moist, like fresh bird droppings! I went out to check on it one night and found it had made a silk pad on the surface of a cherry leaf (you can see some shiny strands of silk around the head). Caterpillars often do this as an attachment site for molting or resting prior to pupation.

I was surprised to find a sleeping dragonfly on a twig near the caterpillar, and I quickly realized I did not know which species I had stumbled upon. Looking in my guides and online convinced me it was a male Blue-faced Meadowhawk, Sympetrum ambiguum.

Dorsal side of resting dragonfly

Many images show a much brighter red abdomen in the males, so perhaps this is an immature or an old male, not sure. It was the first time I have seen one of these beauties and it seemed even more striking while frozen in the beam of a flashlight. 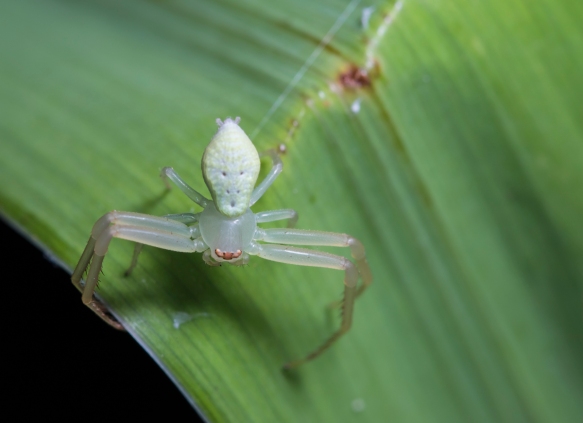 The night, at least around these woods, seems to really belong to the spiders. I spied this delicate Crab Spider moving on a bent iris leaf near the frog pool out front. It looked like a juvenile, so it was difficult to identify, as there are a couple of genera that look pretty similar. 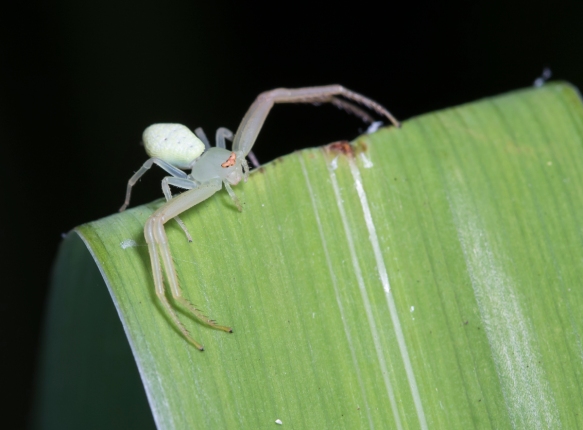 Crab spiders are well-named. Their front pair of legs are longer than the others and their habit of holding them out and up really make them resemble their crustacean cousins. They do not rely on silk to capture prey but are generally sit-and-wait predators, especially on flowers. This little guy was out for a stroll when I saw it. Perhaps they generally move from one plant to another under the safety of darkness. 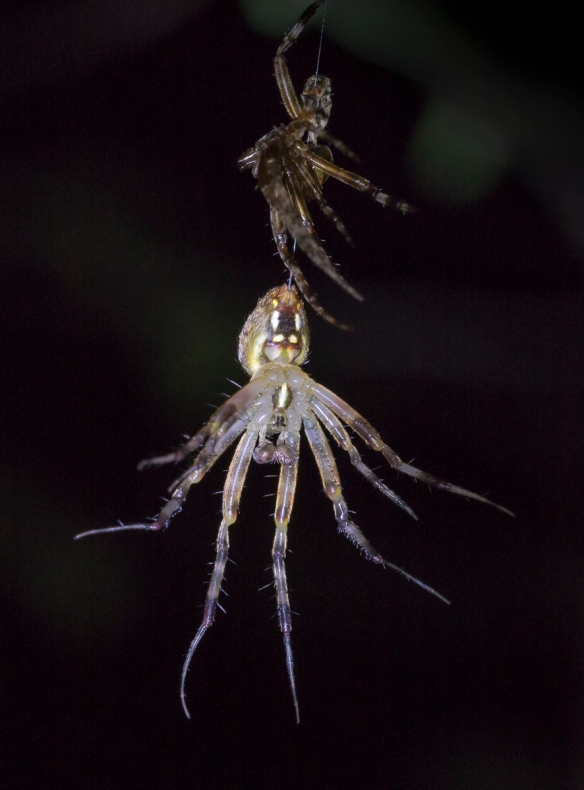 Another thing that often occurs under the cover of night is arthropod molting, or ecdysis. It makes sense, again, from a safety standpoint, as invertebrates are quite vulnerable during this process. On the other side of the cherry sapling from the caterpillar there was a spider that had already emerged from its old skin. It was dangling on a silk thread under the shed exoskeleton, the whole thing suspended beneath a twig.

Spider after shedding its skin

After securing itself by a silk strand, the growing spider generally forces enough fluid from its abdomen to create sufficient pressure in the front body part to cause it to “crack open along the seams”. The carapace lifts off from the front like a lid, remaining attached at the back. The spider then works its limbs free and is suspended beneath its old skin on another strand of silk. Over the next several minutes to hours (depending on the species), the new exoskeleton hardens. You can see why this might be a good thing to do after dark. This spider is probably a Spotted Orbweaver, Neoscona crucifer. It is a common “hairy” spider found in large circular webs around my porch lights or across my walkway each morning. The colors should darken as the spider’s new clothes dry and harden. It is certainly a fascinating process to witness. A night walk can open up a whole new world in your familiar daytime surroundings, so grab a flashlight and take a stroll in the darkness. You never know what you might see.