The grace and elegance of every adult butterfly and moth, as it flits about on wings radiant with color, are counterbalanced by the grossness and ugliness of the immature insect.

As you probably know, if you are a reader of this blog, I don’t agree with this somewhat surprising view held by the great naturalist, Edwin Way Teale. Perhaps he was simply remarking on the belief held by many in the general population that caterpillars are nasty, ugly worms, that do nothing but damage our plants. In contrast, I find caterpillars to be one of the most fascinating groups of critters we have around us – so diverse, beautiful, and bizarre. And, people are fascinated by them, once they get to know them. That was proven once again this past weekend at the NC Museum of Natural Sciences’ annual BugFest event. Total attendance at this year’s BugFest was estimated at over 31,000 visitors, and I feel like those of us in the Caterpillar booth may have talked to most of them.

It was a tough year for finding many of the larger caterpillars that are often the show-stoppers, although we did manage one nice Imperial Moth, Eacles imperialis, that managed to stay a caterpillar until the day after BugFest. 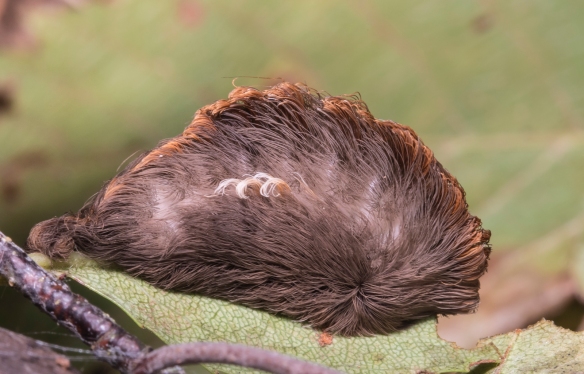 But it was a very good year for some of the more unusual caterpillars. One of them, the Puss Moth Caterpillar, Megalopyge opercularis, is almost as fascinating to people as the larger, showier species. This small fuzz ball goes by many other names – the Possum Bug, Woolly Slug, Perrito (Spanish, for little dog), and Asp (the latter is the better-known common name in Texas). The adult moth is known as the Southern Flannel Moth (see images on the Moth Photographers Group web site).

Late instar of a Puss Caterpillar from last year’s BugFest

Last year we were lucky enough to find one Puss Moth larva. It was an earlier instar, and was somewhat orange in color, giving it a strong resemblance (some would say) to a certain political figure’s noticeable hair-do. This year, we found tree of the larvae, feeding on Wild Cherry and an Oak. Oaks are generally the preferred host, but they are found on a variety of other tree species. 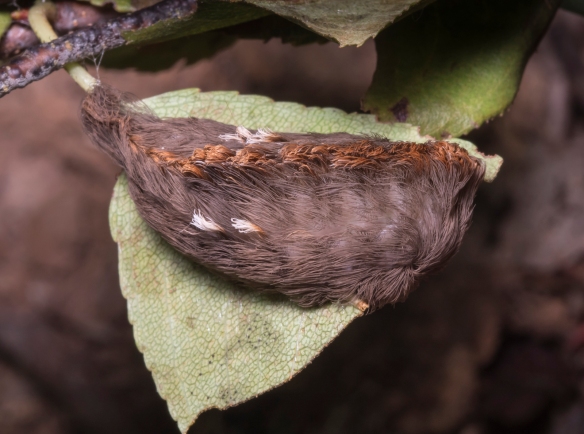 The larvae this year were all last instar larvae, being a darker gray-brown and having the noticeable white curly tufts on each side. These critters don’t look much like a caterpillar. They are covered in fur-like setae and appear to have a tail in later instars. 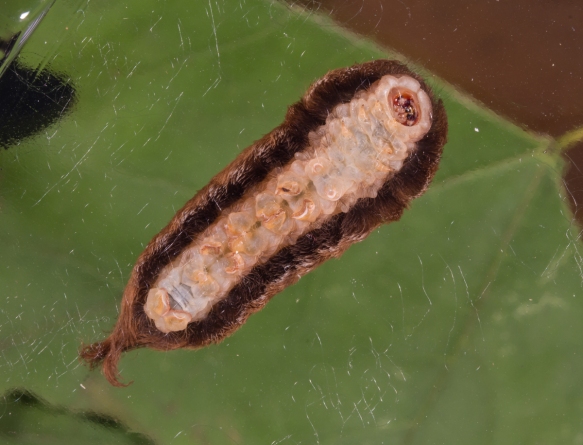 And, unlike most caterpillars, they have two sets of accessory abdominal prolegs. Their head capsules are generally hidden by the “fur” and they appear to more or less glide over leaf surfaces when they move, but are not members of the Slug Caterpillars, Family Limacodidae.

Close up of larva showing spines underneath

But, like many in that family, these cute little fluffs of fur can also inflict a painful “sting” from urticating spines hidden beneath their fuzzy appearance. They have bumps along their body armed with hollow spines with a venom gland that inject a toxin into anything that touches them. All stages of the larvae are armed, but the toxicity (and pain) increases with increasing size of the larvae. This species is considered the most venomous caterpillar in the United States and has been responsible for many painful visits to a hospital, especially in Texas, where the species is much more common. A research paper describing the symptoms of the painful encounters with this species chronicles burning pain, nausea, swelling, and itching. During programs, we house our specimens in clear plastic containers for safe visibility, and are careful when adding new food. Most people will probably never see one of these unusual larvae since they both feed and pupate in trees. And, even though this species can be painful, the vast majority of caterpillars are harmless to humans.

On Saturday, one of the visitors saw something moving on one of the larvae and asked what it was. I looked and could see something just under the skin going back and forth. My first thought was some sort of parasite that was about ready to erupt. I did notice some silk strands attaching the larva to a twig, but reasoned that maybe the parasite had hijacked the larva’s behavior. As the afternoon wore on, it became apparent it was not a parasite, but rather the larva constructing its cocoon and incorporating that furry exterior into the project.

By the end of the day, the developing cocoon looked like an elongate, silk-covered version of what I have found on twigs in the past (see below). Some of the venomous spines are supposedly incorporated into this outer covering, although the larva retains most of them on its body. An excellent summary of the life history of this species with amazing images can be found on the University of Florida’s Featured Creatures web site. 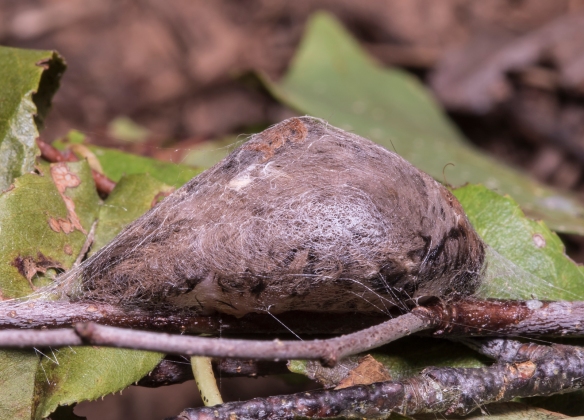 By Monday, the cocoon construction had progressed and the shape was beginning to look more familiar.

The next day, the distinctive dorsal hump (packed with the soft hairs from the caterpillar’s body) was visible. I could also see the operculum on one end that gives this fascinating creature its species name, opercularis (right side in image, before the long taper of silk). There are probably two generations per year with this one overwintering as a larva inside the cocoon and then pupating in the spring. 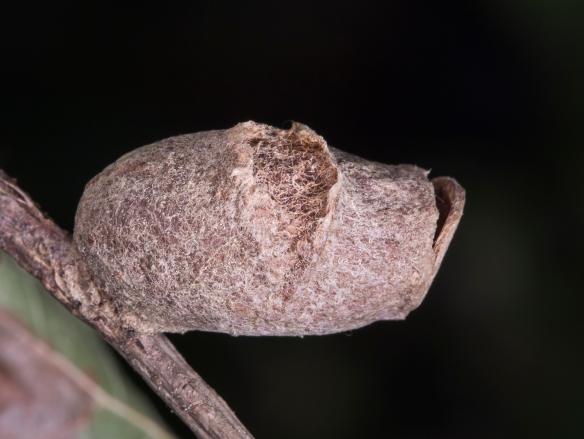 A weathered cocoon reminds me of a mini-mailbox, complete with a door (partially opened on right)

The Featured Creatures page mentioned another peculiar aspect of the life history of this unusual species – it has a pre-adult phase called a pharate adult. This is the phase that pushes open the operculum when the moth is ready to emerge. After the pharate adult gets the “mailbox door” open, the adult moth will then emerge from the pupal skin and fly off. Bizarre indeed.

3 thoughts on “You’re Such an Asp”