The edge of the sea is a strange and beautiful place. All through the long history of Earth it has been an area of unrest where waves have broken heavily against the land, where the tides have pressed forward over the continents, receded, and then returned… The shore has a dual nature, changing with the swing of the tides, belonging now to the land, now to the sea…

The trip was originally planned to be in the Sierras – Yosemite (the other “Y” park), Kings Canyon, Sequoia. But fires, lingering smoke, closures, and little water in the streams for backpacking led to Plan B, the coast. The first part was in the redwood forests – mesmerizing, spellbinding, otherworldly. The last part was more challenging, a multi-day backpacking trip along the Lost Coast Trail (LCT). The trail runs through portions of the King Range National Conservation Area in Humboldt and Mendocino Counties in northern California. Due to the rugged terrain and unstable geology of the King Range, California’s famed coastal Highway 1, which hugs much of the state’s beautiful coastline, cuts inland  along the Lost Coast, leaving an 80 mile stretch of coastline with no major roads. The area is sparsely populated and the roads are steep and winding as we found out on our early morning shuttle ride from Shelter Cove (on the south end of our trail section) to the starting point up north at Mattole Beach. Even though the straight line distance is only 25 miles, it takes about an hour and a half by car. But, the shuttle is worth the pricey cost. You have your car waiting for you at the end of your hike plus you get a lot of good local information from the driver on the way.

The start of the Lost Coast Trail, northern section (click photos to enlarge)

Our shuttle ride began in the predawn darkness at 6:30 a.m. so we could get an early start at the Mattole Beach trail head. Most people walk this section of trail north to south, like we were doing, because the oftentimes strong coastal winds will generally be at your back in this direction…generally. Our day started with a steady 15+ mph wind in our face. And it stayed that way all day and into the night, with occasional gusts much higher. At least it made for cooler hiking. One reason for our early start was that hikers must pay close attention to the tides on this stretch of the LCT because there are a few stretches along the 25-mile hike that are impassable at high tide. Two of the impassable stretches are each about 4 miles in length, so you need to plan your hike to ensure you can either get through them before the tide starts coming in, or you reach one of the campsites (along the many creeks that run into the ocean) inside the impassable zone. By starting early that day, we would be hiking much of the day before the tide reached a level that would halt our progress.

The first couple of miles were pretty easy, except for the steady wind. As we neared the Punta Gorda Lighthouse (no longer active) we saw our first person on the trail. She was a day-hiker and was watching a group of over 50 Stellar Sea Lions that were hauling out on the beach. There are apparently some places that are better than others if you are hauled out, as there was a lot of pushing and chest bumping going on, along with their loud barking sounds. We were a respectable distance from the beach and on high ground, so we sat and watched the activity for about 30 minutes before seeking shelter from the wind in the aging lighthouse. After lunch, we pushed off again, hoping to get to a campsite inside the impassable zone before the tide came in too far. 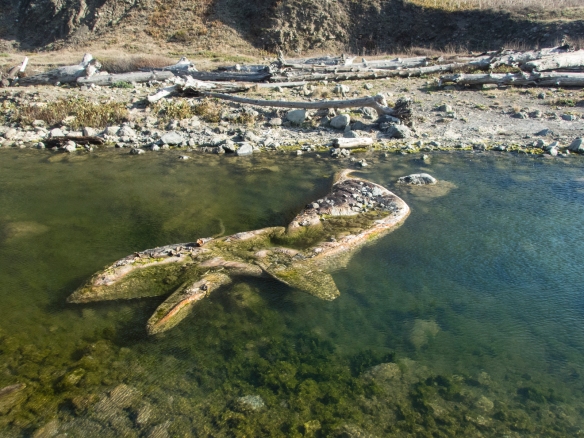 We reached our destination, Cooskie Creek, late in the afternoon. Our shuttle driver had told us about a dead whale calf washed into the mouth of the creek so we knew we were at the right spot as soon as we spotted it in a pool of the creek near the beach. The Bureau of Land Management (BLM) manages the Lost Creek Trail and encourages campers to use campsites that have obviously been used in the past in order to minimize damage to the habitat. We found one upstream that was perfect, including a nice pool in the creek for bathing (in the ice cold water). As the tide reached the high tide mark and no one else had hiked in, we knew we would have the spot to ourselves for the night. We settled in for our first of several freeze-dried meals (boy, have they improved over the years) and waited for another sunset over the Pacific. 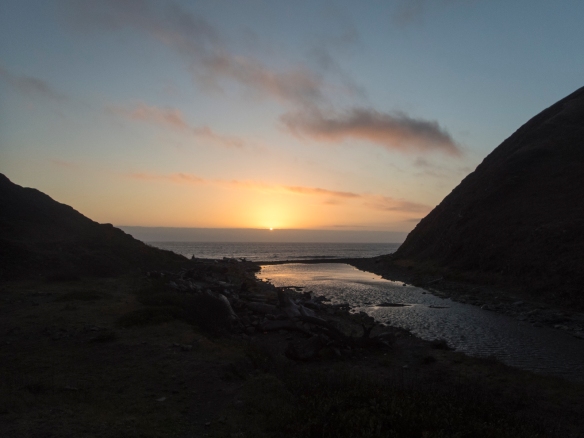 The next morning we waited until the tide started falling and headed out. Hiking conditions varied along the trail from deep sand (the worst from my point of view), to boulder fields, to the wonderful solid ground of the so-called flats. 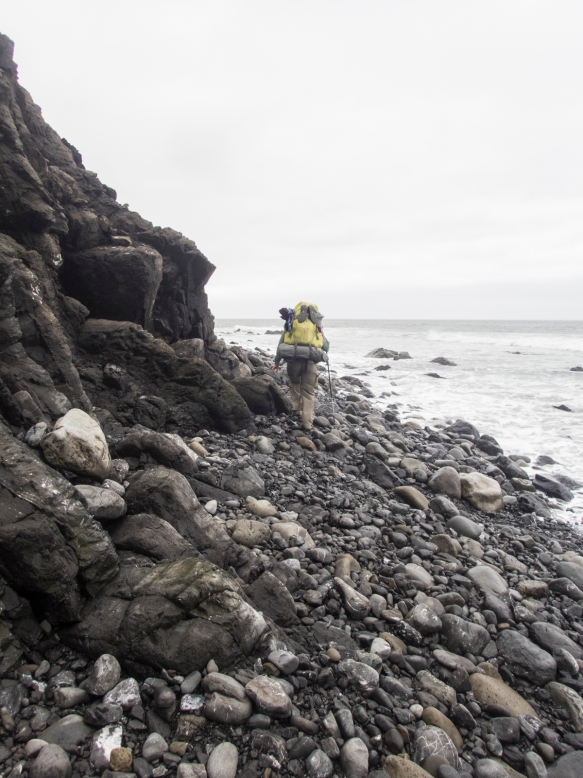 We made the best time on the flats

I strongly advise that anyone attempting this hike have at least one trekking pole. They are invaluable when hiking through the long stretches of rounded rocks on the beach. The flats are the easiest places to hike on the trip and were also the best for seeing wildflowers and wildlife (although the creek side campsites were also good for this).

Since we were hiking and backpacking on this trip, I left my usual camera gear at home and brought my new (birthday gift) Olympus Tough TG-4. It is a compact, waterproof point-and-shoot that has a great macro and shoots RAW files in certain modes. I didn’t think we would see all that much wildlife to shoot, but that turned out not to be true. We saw a lot of Black-tailed Deer along the trail, as well as Stellar Sea Lions, Harbor Seals, lots of birds (including American Dippers along the creeks and a flock of Wild Turkeys at Miller Flats), two live whales, and several River Otter.

On one of the impassable at high tide stretches, we came across a small deer that must have been trapped on the beach in the last tide cycle. The obviously shaken (and wet and shaking) animal was in a location with steep cliffs bordering the beach making it next to impossible to climb to safety. It was quite a way back to the flats and I was unsure what was ahead, so we were hesitant to try to drive the animal out ahead of us. I moved closer to make sure it was not stuck in the rocks (it wasn’t) and we decided to leave it and hope it found its way out. That was a tough decision, but a group following us that we encountered the next day had not seen it on the beach when they passed, so it hopefully made its way to dry ground.

One of the wildlife surprises was the abundance of bear tracks along the beach. They were spread out over a large stretch of the trail and at one point there were two distinct sets of tracks, including one from a fairly large animal. It would have been great to see one out on the beach, but I am thankful we had no issues with them at our campsites. I see now why the BLM requires hikers to carry a bear canister with them for overnight trips (they can be rented locally).

Many people do this trip in three days, but we had decided to take our time and enjoy the journey, so we planned on a five day trip. That also gave us a lot of flexibility in terms of campsite selection, and we managed to have the creeks all to ourselves each night. That probably doesn’t happen very often in the busier seasons. 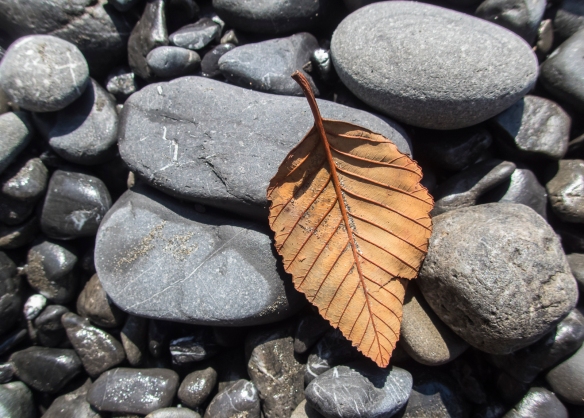 On our fourth morning, we awoke to some light fog moving in off the ocean, creating a magical, misty landscape for our breakfast. We debated staying the extra night, but our last camp was in a setting more reminiscent of a NC mountain scene than something less than a hundred yards from the Pacific surf, so we stayed.

To make it even more special, a family of four River Otters were holed up in a log pile near the mouth of the creek, allowing us a few close up views as they settled in for the night. We ate dinner out on the beach and watched the sea and sky perform one last time – what a beautiful way to end a trip.

Pink clouds reflected in the freshwater pool from Gitchell Creek

A fitting way to end a wonderful hike

The last morning we had to wait until the tide started dropping and we packed up one last time and headed out. The black sands in the final couple of miles were challenging at times, but we could see scattered houses on the slopes of Shelter Cove and that was incentive enough to finish our trek. It had been a relaxing, occasionally challenging, hike along an incredibly scenic coastline. The weather had been perfect – cool, cloudy when it needed to be to shelter us from the sun, and full of beautiful sunrises and sunsets. And the pace was such that we could appreciate the wildlife and small wonders along the way. Not a bad Plan B after all.

A few more shots from our hike along the Lost Coast Trail.

There are a half dozen or so pieces of private property along the trail, some with nice cabins, and one with a beautiful home and grassy air strip. 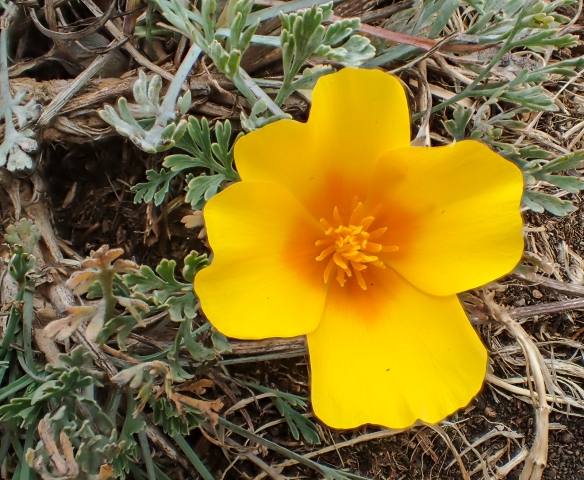 California Poppies brightened our way, especially along the flats.

This giant stump is near the end of the trail.

We found several species washed up on the beach along the LCT – sea urchins, chitons, a dead sea lion, and two dead whales.

I had thought we were doing well and being tough on our 25-mile hike. Then we met these guys hiking in to Miller Flats (about a 10-mile hike from the south) to catch some waves. On our return, I also read that John Muir considered 25 miles a nice day hike…oh well. 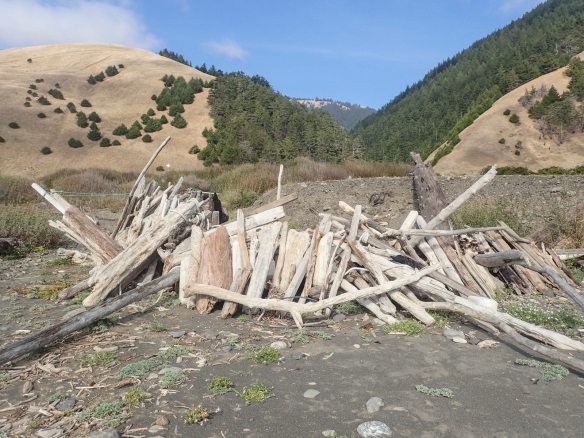 There are a lot of driftwood shelters that hikers have created at campsites along the trail. The BLM discourages this type of disturbance to the natural landscape. 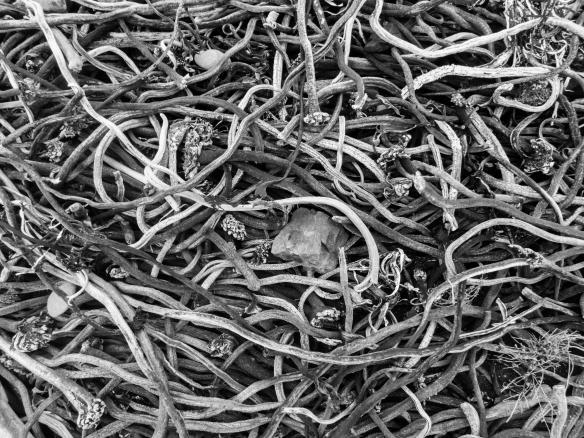 Piles of dried kelp made striking patterns along the trail… 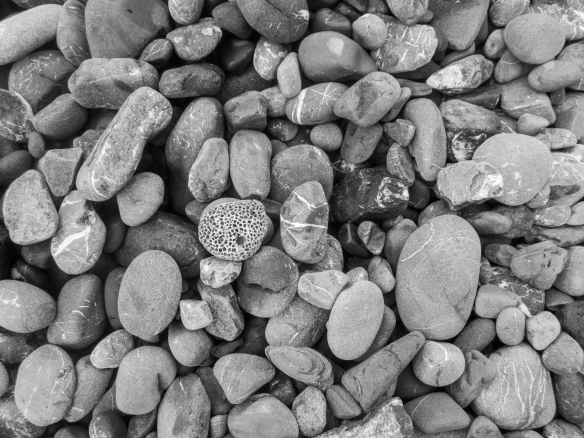 So do the rocks you struggle to walk over.

Western Fence Lizards were a constant companion along the LCT

Things you don’t have to think about when you hike the East Coast beaches.

A gull feather on the beach.

The final sunset on our hike.

5 thoughts on “The Lost Coast”