Now is the time of the illuminated woods…when every leaf glows like a tiny lamp.

Autumn creeps into these woods slowly. I notice it more at sunset, when the light streaming across the ridge now has a distinct yellow tint that it lacks in the heat of summer.

On still afternoons, a close look at a leaf in its final days, reveals a world of intricate detail and beauty. But, there is more than leaf color waiting to be appreciated if you look closely. I walked around the yard yesterday, no particular purpose in mind, just looking closely at the changing landscape. Two weeks ago, I posted about a surprise discovery of what I thought might be my last larva of the waning warm season. I was wrong. 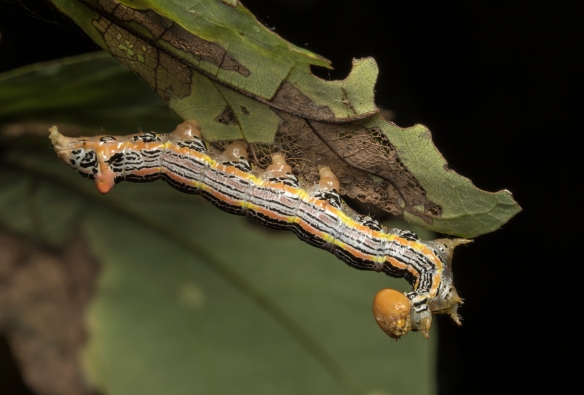 Not sure why I saw it as it was on the underside of a small sapling oak, but see it I did…another late season larva. It looked dressed for the season in a kaleidoscope of color and pattern. It also looked familiar, but I had to spend a few minutes paging through my worn copy of Wagner’s Caterpillars of Eastern North America before I found what I think it is – a Red-humped Oakworm, Symmerista canicosta.

Colors befitting the season for this beautiful caterpillar

Apparently, this species is almost identical to another, the White-headed Prominent, S. albifrons, which shares this part of their ranges. I later learned that it may be possible to separate the two based on the relative widths of the black and white lines on their dorsal surface, which, of course, I didn’t manage to capture in my photos. 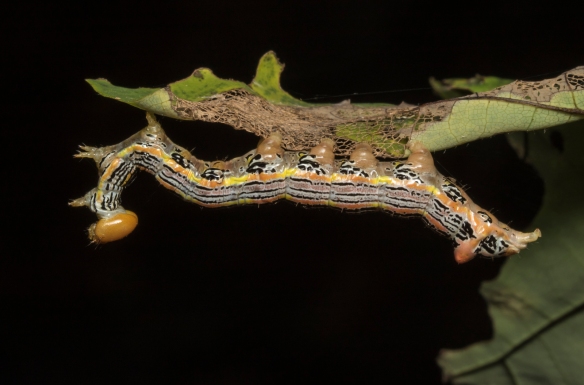 A real beauty, whichever species it may be

These caterpillars start life as gregarious feeders and become solitary in later instars. They can also apparently cause widespread defoliation of oaks, especially in the northeast. When disturbed, they assume a curved position that makes it tougher to discern which end is which. I don’t know if there is an unpleasant surprise awaiting any predator that attempts to feast on either end, but many species with this behavior secrete noxious chemicals at both ends to deter would-be diners. In any case, whether I learn its true identity ,or why it behaves the way it does, this little guy brought some color and amazement to my stroll outside, and you can’t ask for more than that, at any time of year.