I am looking for acorns these days, to sow on the Walden lot, but can find very few sound ones…I found by trial that the last or apparently sound acorns would always sink in water, while the rotten ones would float, and I have accordingly offered five cents a quart for such as will sink.

In spite of this fact being around for over one hundred years (at least), I found out about it only after I started working at the museum 20+ years ago. But, first, let me explain my introduction to the creature that is often the cause of this phenomenon of the floating acorn. I was preparing a lesson for a class years ago and decided to do something on acorns (it was a very good mast year that year). I collected a batch of acorns from a couple of different oak species and was going to have students observe and sketch them. I placed the nuts in a pan and after a couple of days, I noticed some movement in my acorn stash…small, chubby little grubs. There were a lot of them…what the heck were these things? 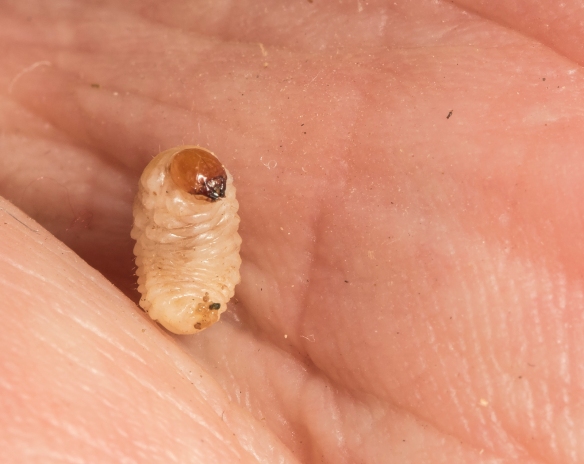 Beetle grub from an acorn (click photos to enlarge)

I quickly learned they were the larvae of the acorn weevil, Curculio sp. 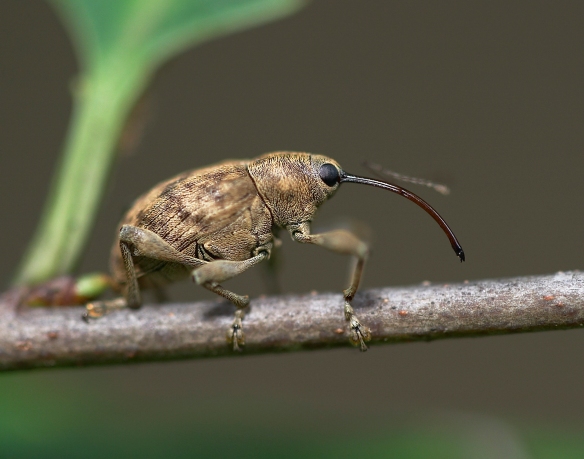 Weevils are one of the largest families of insects, with over 2500 species thought to inhabit North America (that’s over three times as many weevils as there are species of birds that breed on North America). 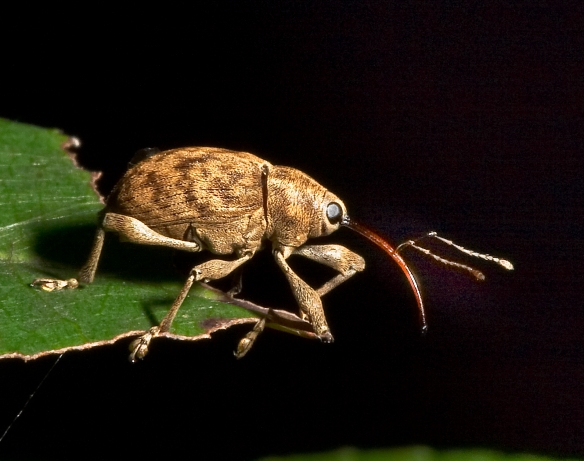 I photographed this adult, the only one I have ever found, in late August a few years ago

True weevils are generally small beetles (less than 1/4 inch) with a long snout (rostrum) that remind some of the trunk of an elephant. Their antennae are bent in the middle (geniculate) and are located about half-way down the rostrum. The basal portion fits into a groove in their snout when they are feeding. Their mouth parts are located at the tip of that long snout and are used to chew holes in plant material and, in the case of acorn weevils, through the shell of developing acorns. Females do this in summer and create chambers in the nut meat and then lays eggs into them. Eggs hatch in a few days and the larvae begin feeding on the acorn meat. From what I could decipher in various reports, it looks like larvae feed for a couple of weeks before emerging. I have found as many as three of the larvae in one acorn, although studies suggest those sharing an acorn may develop more slowly. The grubs usually emerge within a few days after the acorn drops to the ground. 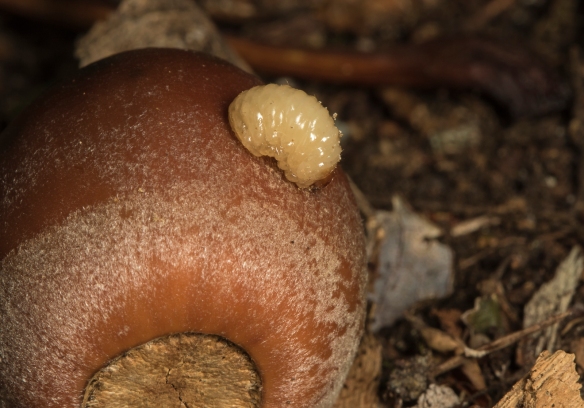 While on our recent camping trip at Grayson Highlands, we were lucky enough to witness one emerging. Melissa looked down and noticed something white on the side of an acorn. When we realized what it was, I ran and grabbed my camera. 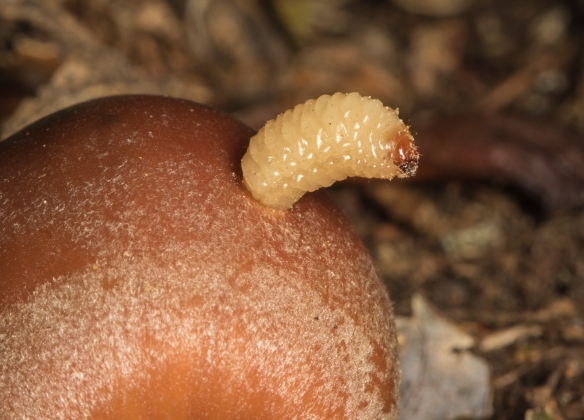 Luckily, it is not an easy process, so I was able to get back in time to grab a few images as it struggled out. The larva chews a small hole that looks just large enough for its head capsule. It then must squeeze its chubby little body through this tiny hole by means of a series of gyrations and contractions. 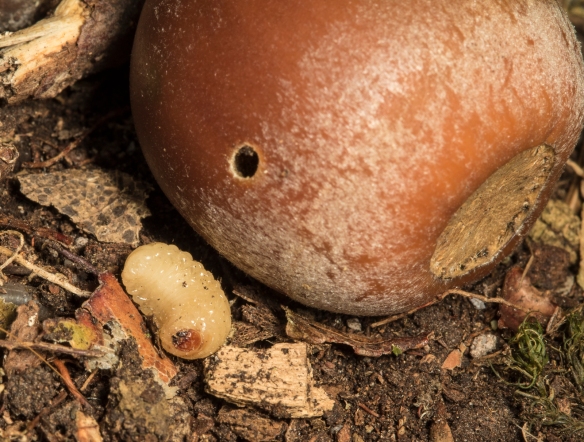 Amazing that this grub can fit through so small a hole

The grub finally pulled free and dropped to the ground. It immediately started crawling about, probing into the soil. 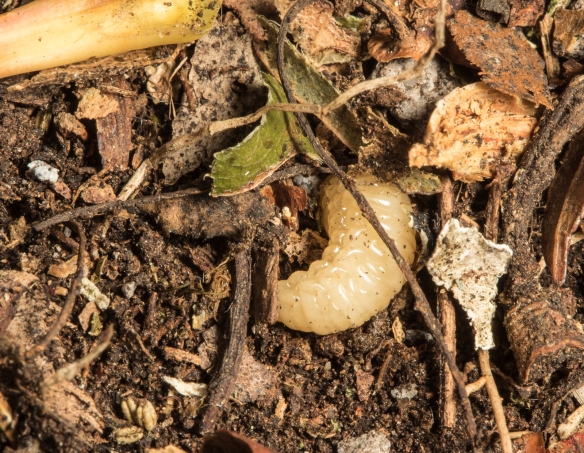 I lingered and watched, hoping to see it disappear into the soil. But, it just couldn’t seem to make up its little grub mind as it would crawl, dig, crawl, and dig some more. I finally gave up and left it to its decision-making. I have since watched one dig rapidly into loose soil in a container I placed it in, so this burrowing behavior is likely influenced by soil characteristics. Online resources differ somewhat as to what happens next in the weevil’s life cycle. This may be because there are several species of weevil that lay eggs in the acorns of several different oak species, and they all may have somewhat different life cycle details. The grubs dig down into the ground and create an earthen chamber around them. They overwinter like this, pupate, and emerge the following summer, or, according to some sources, up to three years later. However long it may take this little guy to transform, we feel lucky to have witnessed this brief portion of an amazing creature’s life. 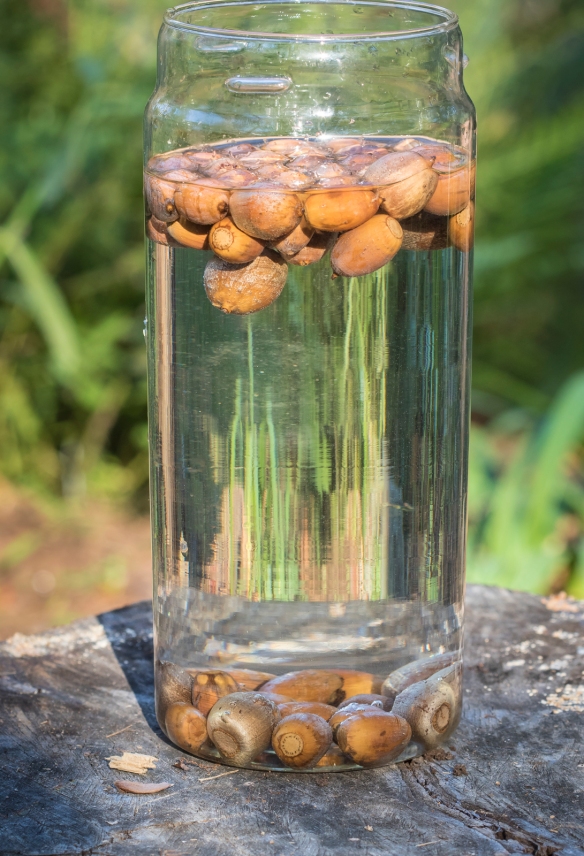 Now, back to Thoreau’s observations…gather some acorns and drop them in water, and you will find there are, indeed, floaters and sinkers. Turns out there are several things that can cause an acorn to float – a cracked shell, fungi that has spread through the meat of the nut, or one or more species of insects that feed on acorn meat. All probably introduce air pockets into the nut and make it less dense. This also leads to another, albeit not quite as clear, indicator of soundness in acorns. Good ones (the sinkers) bounce when dropped on a hard surface like a floor; those with weevils or other “impurities” (floaters) drop with a thud and hardly bounce at all. 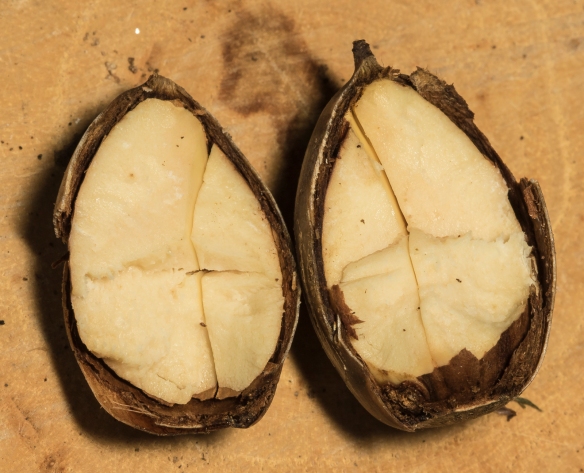 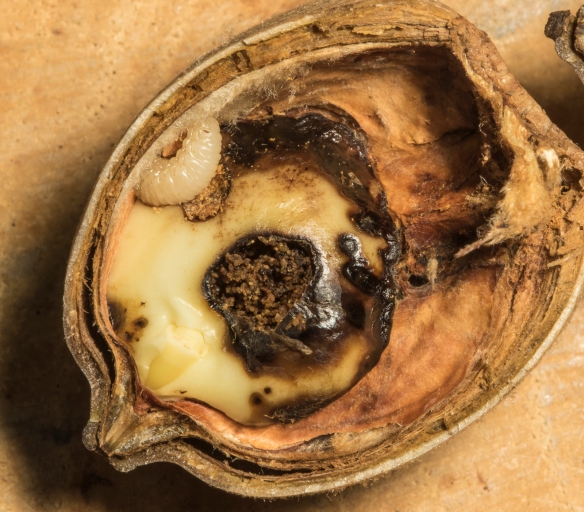 Open up a floater and you may see this

The “unsound” acorns usually contain some dark areas in their meat (or may be totally dark). The two above show weevil larvae and their feeding tunnels, along with frass and some debris from feeding activity.

In researching for this post, I came across a recent blog on acorn weevils by Charley Eiseman, one of the authors of the excellent reference, Tracks and Signs of Insects and Other Invertebrates. This guy does some great work and he includes a wonderful video clip of a larva chewing its way out of an acorn…guess there is still more acorn watching in my future (and, I hope, in yours).