I put 100 hickory nuts on my bureau at dusk one fall evening…by midnight, she had stored them all. At midnight…counted another 100 hickory nuts and spread them. The next morning, every nut was gone. She had picked up and stored 200 in one night.

~John Terres, on how many nuts his captive flying squirrel could store in one night

We had a gathering of friends at the house this past weekend, complete with campfires, and basic outdoor foods like hot dogs, beans, and coleslaw (did I mention S’mores?). It was a beautiful, crisp evening and good conversations and laughter were heard in our woods for several hours. Natural history highlights included seeing a couple of spotted salamanders laying eggs in one of our pools, and listening to the resident screech owl wailing across the ravine. But, the event that drew the biggest gasps and sounds of joy was a surprise sighting I had out back after several guests had already called it a night. I took some bottles and cans out onto the back deck where we had put our recycle bins and the bottles clanked loudly as I dropped them in. A few feet away, some people were laughing just inside the screened porch. I turned to join them, when something caught my eye…

I noticed a shape sitting in the bird feeder that hangs suspended between the house and a nearby tree. A bird this time of night???…nope, a flying squirrel! I have seen and heard them (they make high-pitched chirps that sound like birds at night) in these woods before, but never seen one on the feeder (probably because I rarely turn on the lights on the deck). This little guy didn’t seem to care that I was only a few feet away staring at him. I whispered to the folks on the porch and they came out…the noise level increased, but still no sign of stress. I went out to the campfire circle and told folks about my find, and soon there were close to a dozen people gathered on the deck excitedly watching this beautiful little creature. 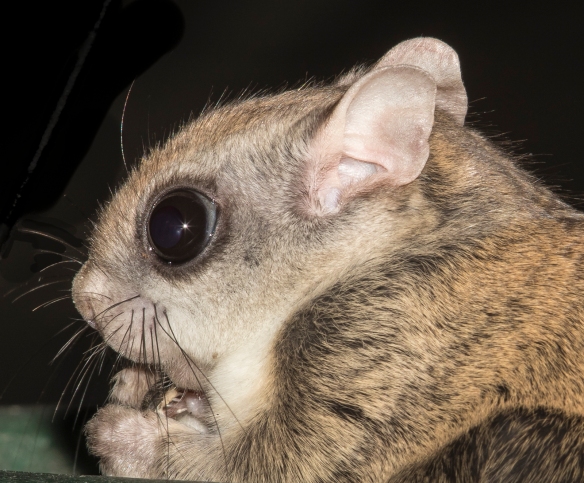 Close up of flying squirrel

In spite of the increased noise, and a flashlight beam shining on it, the squirrel continued to chow down on sunflower seeds and glance back at us with those large dark eyes. Of course, those big eyes are an adaptation for their nocturnal lifestyle. Combined with a keen sense of hearing, flying squirrels use their oversized eyes to help find their way in the darkness and avoid dangers like owls and terrestrial mammals. I was surprised to read that these abundant little squirrels actually spend a fair amount of time foraging on the ground at night, where they are much more vulnerable to predators. 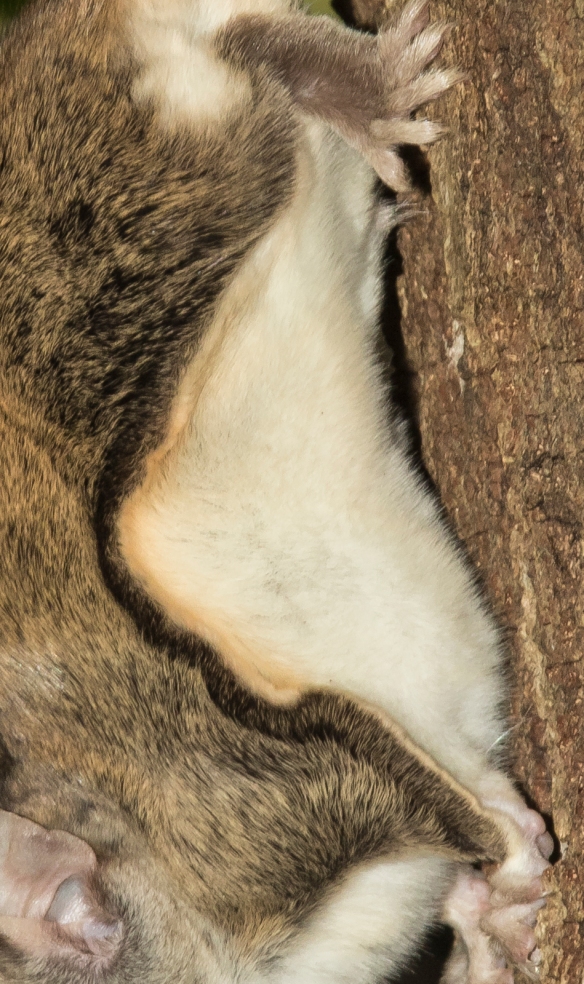 The fold of skin that allows a flying squirrel to glide

As you probably know, flying squirrels don’t really fly, they glide. The special adaptation that gives them this unique ability is a fold of furred skin (patagia,; singular patagium) that stretches on either side from the wrist to the ankle. The photo above shows the edge of one of these folds. When a flying squirrel leaps off of a tree, it stretches its legs wide, and the the patagia form a wing-like structure that enables the squirrel to glide downward. Using small movements of the feet and tail, they have remarkable skill in directing their glides and can make sharp turns and precisely hit targets (like a suspended bird feeder). Though usually from tree to neighboring tree, their glides can cover much larger distances (well over 100 feet). 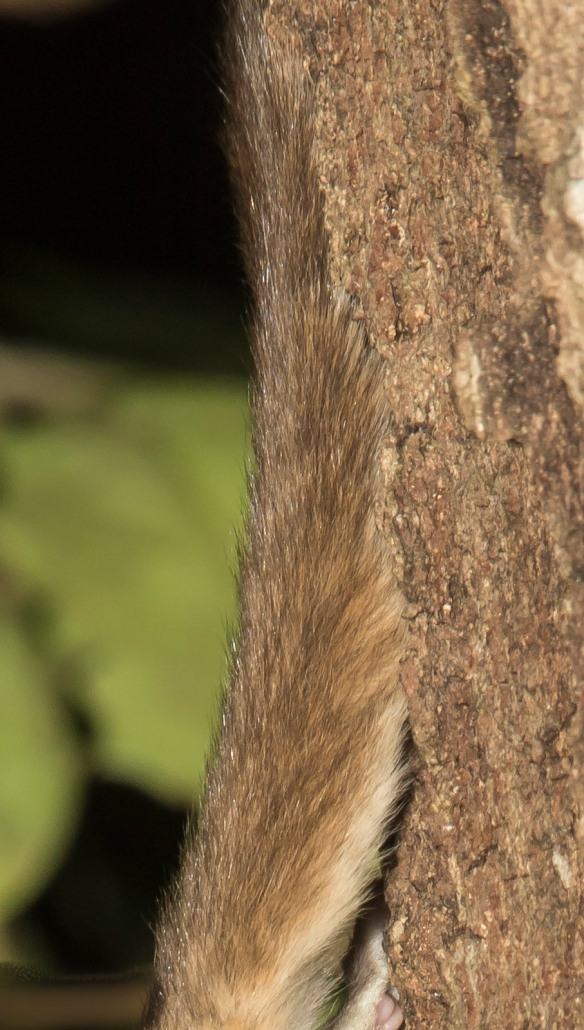 Another useful body trait for a gliding mammal is a long (about half their total body length) flattened tail that can act as a rudder in flight. Right before landing on a tree trunk, flying squirrels assume a vertical position, legs spread and tail down, which helps serve as a brake in their glide. 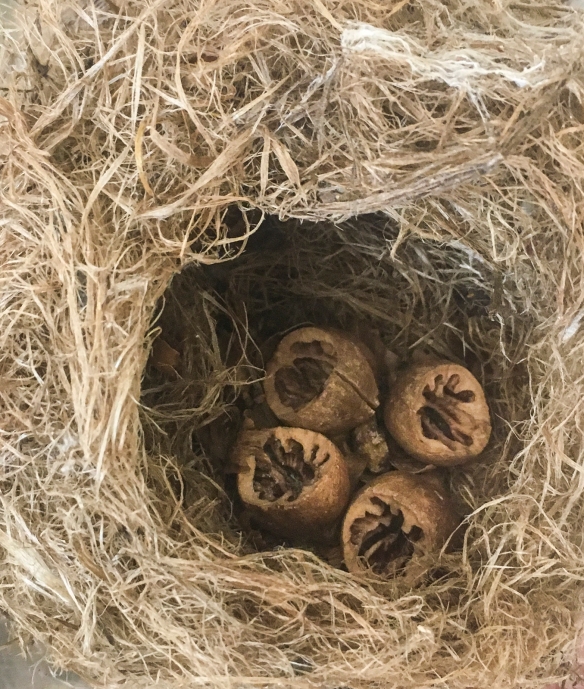 So where are they going with this special talent? Usually in search of food (or to escape predators). Flying squirrels are omnivores, eating a wide range of vegetable and animal materials. They are especially fond of nuts and seeds, but will also dine on insects and birds eggs and young. Most people don’t realize how common our flying squirrels are, even in urban settings (they are often as common as the more noticeable Eastern gray squirrels). A sure-fire clue is the presence of nuts that have a hole chewed in them like the ones pictured above. A recent visitor to the Garden brought in this “nest” from a bluebird box in her yard that she had cleaned out. The nest contained four hickory nuts and she wondered what was using the box. Flying squirrels use tree cavities, nest boxes, attics, and my storage shed, among other places, as nesting spots and retreats. This nest was lined with shredded cedar bark (a favorite of flying squirrels) and contained the tell-tale evidence of nuts with a hole chewed in them.

A Southern flying squirrel, one of our cutest mammals

We have two species of flying squirrels here in North Carolina – northern and southern. The latter is what we have here in the Piedmont and throughout much of the region. Northern flying squirrels are slightly larger and are restricted to higher elevations in our mountains and habitats further north. Our party squirrel finally decided it had had enough of the gawkers, and nimbly darted up onto the wire and glided over to the nearby oak tree, dashing around to the side of the trunk when it landed. It paused there and stared at the crowd before retiring into the darkness, giving us all a fantastic look at one of our most endearing mammals and a lasting memory of a gathering in the woods.