The happiness of the bee and the dolphin is to exist. For man it is to know that and to wonder at it.

Just at closing one day this week, a coworker at the Garden sent an email alerting everyone to a swarm of honeybees just outside the back gate. I was getting ready for programs the next day so wasn’t able to get down there for an hour or so, but finally grabbed the camera and went out to see if I could find it. I asked a couple of people that were standing there talking if they knew the location of the swarm, but they had not seen it. About then, I saw some flying insects, and quickly found a ball of bees about 12 feet up on a small tree trunk.

I’m always amazed when I see one of these swarms…a buzzing blob that may contain hundreds to thousands of honeybees. Beneath all that is royalty, the queen. Swarms usually occur from late spring into early summer and appear more common after a mild winter and an early spring, like this year. A swarm is the process by which honeybees form a new colony. When the colony needs room to grow, the bees will raise a new queen. The old queen then leaves the hive with several thousand of her followers, leaving enough workers behind to take care of the new queen and the business of the old hive. 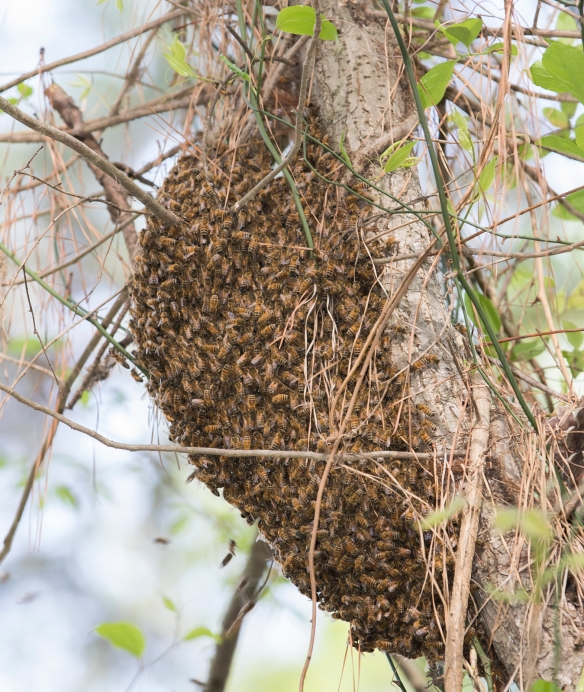 Scout bees are looking for a new hive location

The swarm usually flies a short distance away from the old hive and settles on some object (it can be a tree branch, a light pole, or even some part of a house). The queen is usually somewhere near the center of the cluster. Bees in a swarm are usually docile so there is no need to panic should you find yourself near one. The swarm stays in that temporary location anywhere from a few hours to a couple of days until scout bees locate a suitable new hive location, like a hollow tree or other protected spot. In the case of these bees, a local beekeeper was contacted and he came by the next day (unfortunately I had programs so did not get to witness this). He used a “bee vacuum” (a contraption that looks like a shop vac hooked to a box) to literally suck up the swarm so he could then relocate them to a backyard hive for honey production. Apparently, there is a network of beekeepers that can be called on for just this sort of service, which becomes even more valuable if bees decide to set up their new hive inside a dwelling or some other unwanted space.  In this case, both bees and human benefit from a sense of swarm on a late spring afternoon.