The great wonder of the vegetable kingdom is a very curious unknown species of Sensitive. It is a dwarf plant. The leaves are like a narrow segment of a sphere, consisting of two parts, like the cap of a spring purse, the concave part outwards, each of which falls back with indented edges (like an iron spring fox-trap); upon anything touching the leaves, or falling between them, they instantly close like a spring trap, and confine any insect or anything that falls between them. It bears a white flower. To this surprising plant I have given the name of Fly trap Sensitive.

A couple of weeks ago I posted this image from an Educator Trek to Holly Shelter Game Lands and asked you to consider what these people were studying. It was one of the highlights of our session – examining the amazing carnivorous plant, the Venus flytrap, Dionaea muscipula.

Earlier posts on this plant (The Most Wonderful Plant in the World and Where Insects Fear to Tread) gave some of the details of how it traps its prey, but here is another quick pictorial overview: 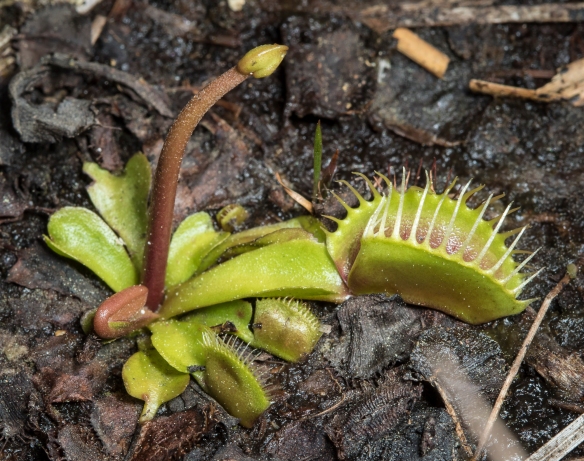 The traps are highly modified leaves (note flower stalk emerging from center). These plants grow in moist, nutrient-poor soils, only within about a 75-mile radius around Wilmington, NC. The carnivorous habits are an adaptation to secure needed nitrogen from their invertebrate prey. 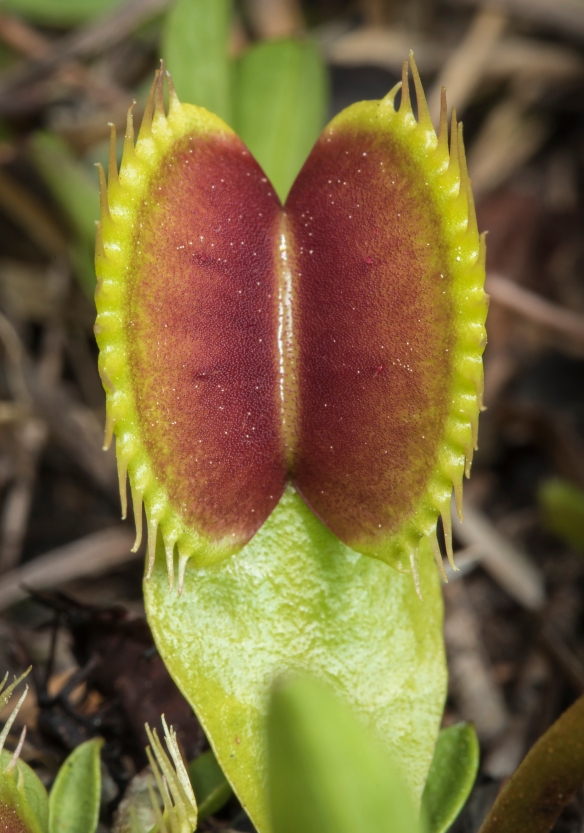 Each trap consists of two hinged lobes with a fringe of fleshy “teeth”. 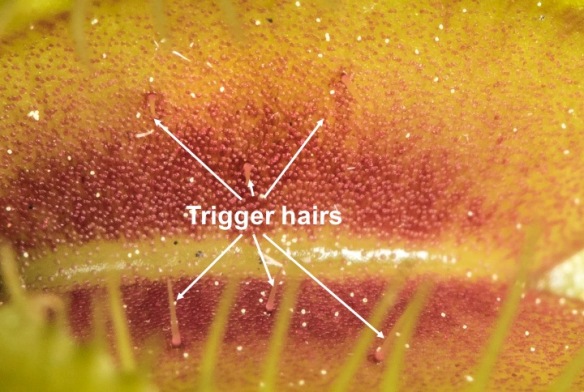 On the inner surfaces of the lobes are trigger hair projections, called trichomes, that cause the lobes to snap shut when prey comes in contact with them. 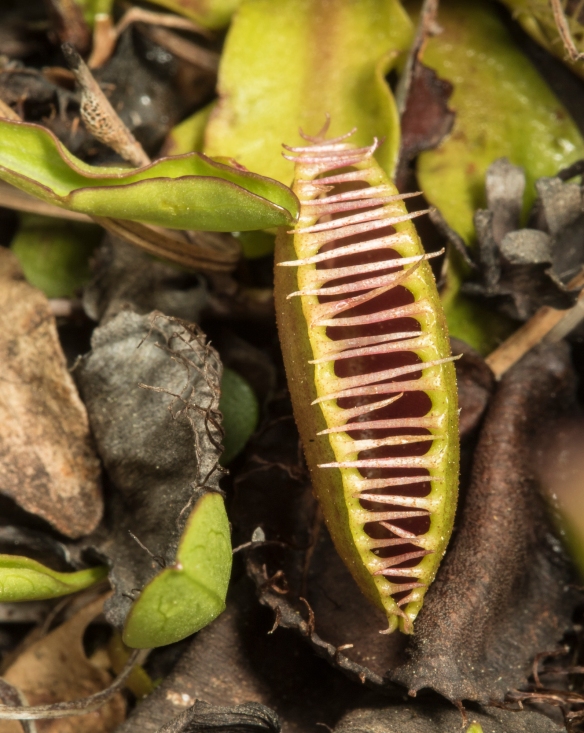 Two trigger hairs must be touched by prey within 20 seconds (or one hair twice). The trap shuts rapidly (in less than a second).

When a non-prey object, like raindrops or a human with a pine needle, causes the trap to shut, it typically is loosely closed as in the photo above. If no other disturbance occurs to the trigger hairs, the trap will reopen within several hours. If, however, a prey item is caught, and is struggling and continues to hit the trigger hairs 4 or 5 more times, the trap shuts tightly and begins to release digestive enzymes. The enzymes gradually digest the soft parts of the prey. The nitrogen (and other nutrients) released are then absorbed by the lobes and the trap will reopen after several days. Each trap can open and close 4 or 5 times before that trap dies. New leaves with traps are then produced from underground stems.

A trap ready for a snack.

A recent publication on flytraps provides results of a collaboration between researchers at the NC Botanical Garden, NC State University, and the US Fish and Wildlife Service. They examined the diet of flytraps in the field to investigate if there is any overlap between their prey and their pollinators (which seems like a bad idea from the plants’ perspective).  We decided to look for ourselves and see what we could find in a few of the traps. 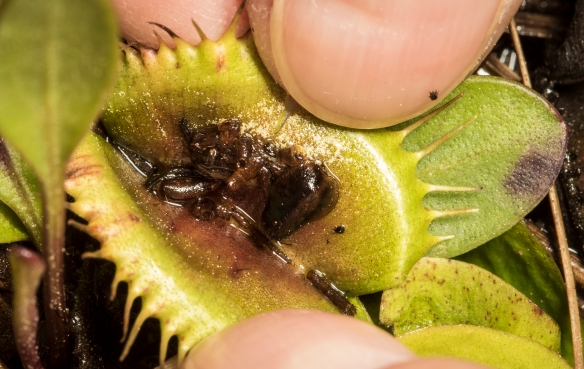 We gently opened a few traps to see what they had eaten. 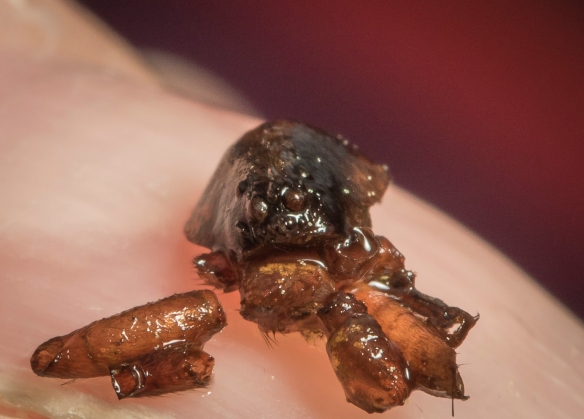 A spider (probably some sort of wolf spider) as prey in one trap.

Our limited results were in line with what the scientists found – 40% of the prey they found in traps were spiders. The second largest group of prey were ants. In other words, Venus flytraps seem to specialize in eating crawling invertebrates, whereas the pollinators they found were primarily flying insects (bees and beetles). This makes sense when you look at the architecture of this plant. Traps are low to the ground, rarely rising more than an inch or two off the substrate. In contrast, the small white flowers are borne on stalks rising about 12 inches above the traps, helping to ensure that the plant minimizes the risk to its flying pollinators. Perhaps a more appropriate name for this wonder would be “Venus spidertrap”.

Poaching Venus flytraps is now a felony in North Carolina.

After observing these botanical marvels, we can appreciate why Charles Darwin called them “the most wonderful plant in the world”. In recognition of its limited global range (primarily in NC) and concern over its conservation, North Carolina designated the Venus flytrap as the official state carnivorous plant in 2005. And, as of 2014, Venus flytraps are protected from poaching by a law that makes it a felony to dig them up in the wild. If you would like to learn more, and see some flytraps (and other insect-eating plants) up close, you can visit the carnivorous plant collection at the North Carolina Botanical Garden. They should be blooming soon!

9 thoughts on “Plants That Bite Back”