The larva of the Royal Walnut Moth is a striking object. With its curved horns and numerous spines it presents to the uninitiated a truly repellent aspect.

I must agree with Mr. Holland in that I have seen many “uninitiated” people react with horror on their first sighting of a hickory horned devil. But I, and many of my caterpillar-loving friends, think this gargantuan larva is one of the sweetest finds you can make on any summer walk in the woods. And that is exactly how I reacted a few weeks ago as we hiked out to Morgan Creek with our 16 summer campers for some creek dipping. As we neared the creek bottom, I spied some frass (caterpillar poop) in the trail. Anytime I find a cluster of frass on the ground (especially large ones like this), I look up in anticipation. After some searching, I found it, and was thrilled to see it was a hickory horned devil. It was feeding on sourwood, a host species I have never found one on before. I left it until we had finished with the creek sampling and then collected it on the way back to the classroom.

The kids were amazed at its size and further astonished that it still had some growing to do before it was done as a caterpillar. We named it Harvey (why not?) and they excitedly checked on it every day. On Friday, Harvey stopped feeding and hung under a branch, motionless. I decided to take it home for the weekend to watch it and provide fresh food, but the larva did not move until Sunday morning when I looked in and saw this… 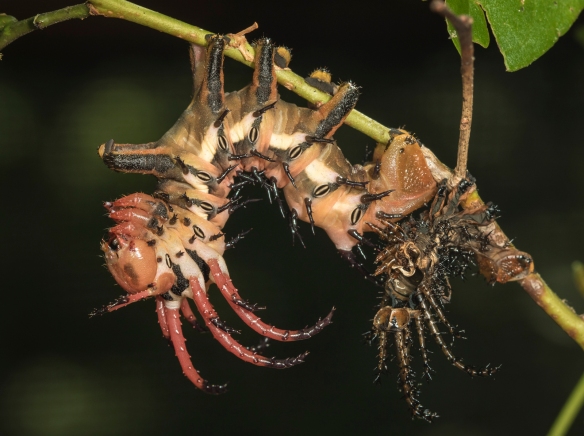 Harvey sat motionless for two entire days prior to this molt. He remained in that position much of that morning and then finally turned around and began to eat his shed skin, something I have seen these larvae do every time I have raised one.

Over the next couple of hours, I checked on its progress as the larva slowly consumed the shed skin, starting with the formidable spines.

By the next morning, Harvey had acquired his new set of colors, the bold green with stripes and the orange “horns” that cause people to worry (unnecessarily) about their safety should they encounter this behemoth. 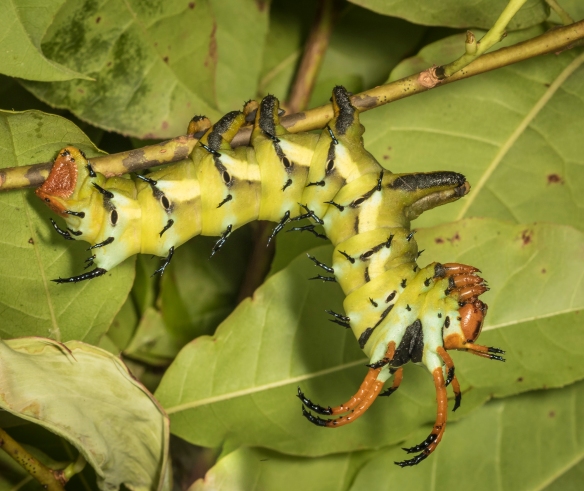 Harvey then did what caterpillars do best – he ate and ate and produced a lot of rabbit  scat sized frass. He did this for another week (with a new group of admiring summer campers) and then the final change began. It starts with a blue-ish tint appearing in the green background color. Then he stopped feeding and began crawling about the cage, a sure sign that the search is on for a place to pupate (this species burrows into the soil to form its pupa).

Harvey shrinking and getting ready for the long sleep

Over the next couple of days Harvey started to shrink. By week’s end, he was about 1/3 his original size, but would still wriggle if touched.

The day before the pupa

The last morning of camp, I looked in the container and the final shed had occurred, his old skin lying next to the fresh pupa.

Shortly after the last shed, the beginnings of a pupa (it darkens over time)

The pupa took a couple of days to harden and darken. Harvey will now wait until at least next summer (some overwinter as pupa for 2 years I have read) before emerging as a beautiful Royal Walnut Moth. Thanks, Harvey, for allowing two groups of summer campers (and some astonished adults) a glimpse into part of your amazing life. 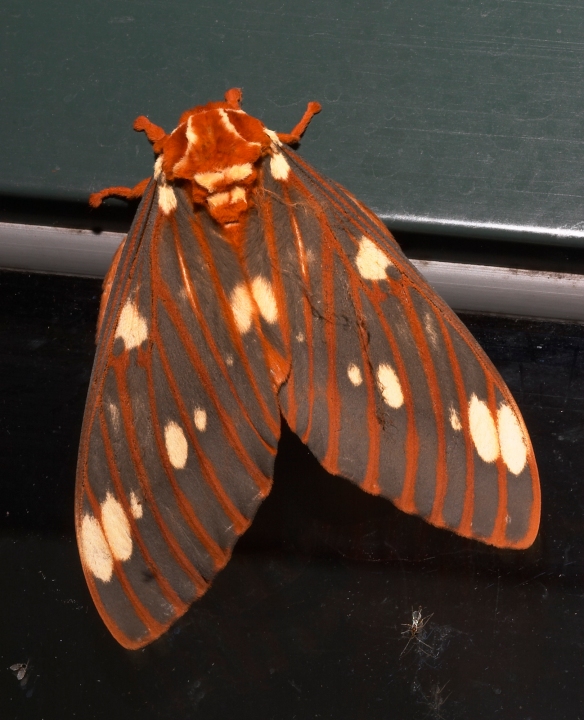