When you leave a beautiful place, you carry it with you wherever you go.

I certainly carry certain places with me. And moments in those places have a way of adhering to my memory, reappearing when my mind wanders to sights and sounds of their wildness, their beauty, their mystery. And I now need these places and these memories even more. The beauty of nature has a way of helping us cope with the confounding issues of our times and gives us hope. One such place for me is what I usually simply call “Pungo”. Its official name is the Pungo Unit of Pocosin Lakes National Wildlife Refuge. I managed another trip last weekend, heading down after a program at work on Saturday, and meeting friends from work Sunday morning. 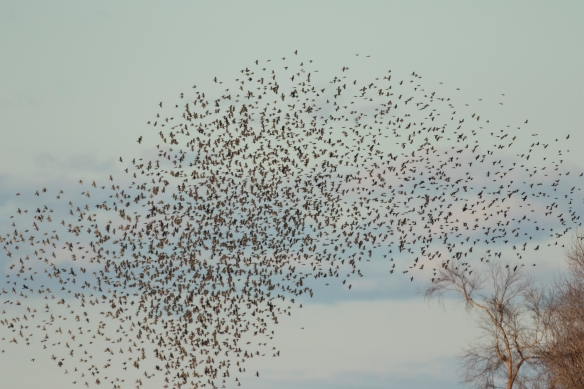 I arrived fairly late in the day on Saturday and went straight to North Lake Road. Flocks of blackbirds (mainly red-winged blackbirds and common grackles) were flying back and forth from the corn field to the trees, twittering as they flew in wave-like patterns in response to aerial predators (real or imagined) or some other cues. I ran into some friends and we had a nice flyover of snow geese that couldn’t make up their minds where to go. Melissa was down last weekend also, leading a Museum trip, and I found that group on the way out. We parked and watched swans returning to the refuge for the night along with the swarms of ducks (called ducknados by a young observer a couple of years ago) flying into the corn fields from the adjacent swamp.

The quiet beauty of a sunrise at Pungo

The next morning found me sitting in the quiet of a Pungo sunrise with the soft cooing sounds of swans. There is something magical about sunrises, the way they slowly change the landscape – the silence, the peacefulness.

I decided to walk down to the Duck Pen observation blind hoping to see some swans in close. Instead, I was treated to a beautiful sky over the calm waters. A long swooshing sound turned out to be an approaching flock of red-winged blackbirds undulating westward to the corn fields.

The elegant moves of a Tundra Swan preening

As the sun rose above the trees, I headed back to the impoundment known as Marsh A to spend some quiet time with the majestic swans. These birds are simply feathered elegance. The low angle of morning light produces sharp lines and highlights the gentle curves of these beautiful birds. They spend a lot of time preening their 25,000 feathers… 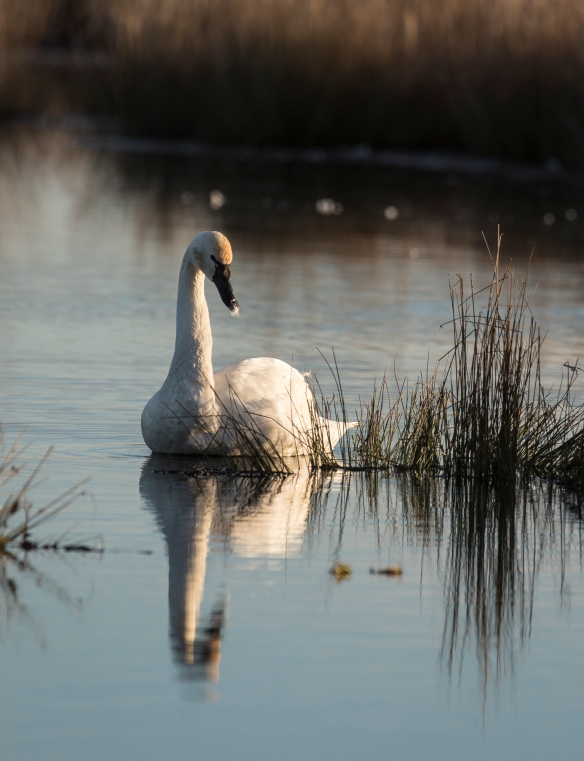 …and occasionally get one stuck on their bill (probably the equivalent of that piece of lettuce that your friend tries to tell you is stuck in your teeth). I truly enjoy spending time with the swans. But, my friends were going to arrive soon, so I decided to drive around and get a few pictures of other birds (or whatever I could find) while the light was so nice.

A Swamp Sparrow feeding along the edge of a canal

I drove slowly along the canal edges looking for brushy spots that often harbor a variety of small birds. The usually secretive swamp sparrows were feeding out in the open along the edge of the water. If you take the time to look at sparrows, they really are elegant little birds, each species with a distinct personality and a blend of subtle colors and patterns.

Savannah Sparrows along the edge of a field

As I drove along the field edges, groups of Savannah Sparrows flitted up from the corn stubble and grasses into the shrubs and trees lining the canals. I appreciated a chance to view them against the sky rather than camouflaged in the grasses.

The calm winds and clear skies made for a good vulture day. There are a few large turkey vulture roosts along the road edges at Pungo, so it is common to see them perched in snags along the roadsides in the morning, waiting for the warmth of the day to create thermals for their efficient flight. One member of the pair above demonstrated a common vulture behavior – the spread wing posture. This is often seen early in the day as birds try to warm up or dry their feathers after a damp night.

One vulture allowed me to drive up closer than most, so I was able to get a few portrait shots (maybe not your dream photo, but they are interesting nonetheless). There is a stark beauty in their ugliness, a lot of detail and character in their wrinkled faces. Adult turkey vultures have reddish skin (juveniles have blackish-gray skin) and an ivory bill. You can also see their huge nostrils (nares) which help them have one of the keenest senses of smell in the bird world. They also have a larger olfactory lobe in their brain compared to other species so they are well-equipped to detect dead animals as they soar above the landscape. As I drove along D-canal road, I spotted a few vultures squabbling over a duck or goose carcass in the private fields across the canal. As I watched, they suddenly took flight, along with a great blue heron that had been stalking prey in the nearby drainage ditch. 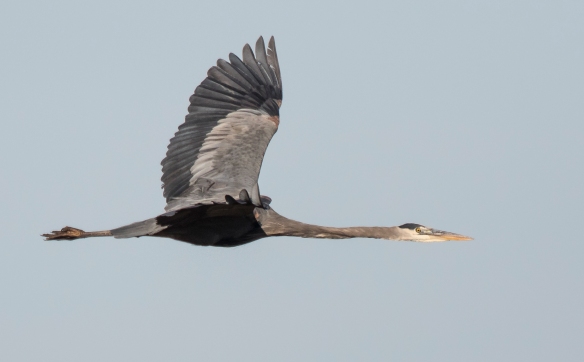 As I watched the carcass, a Great Blue Heron flew by in a hurry

The heron flew in an arc from one field to another across the road, squawking as it went. I turned and saw the reason for all this commotion…

The reason the heron took flight

…an adult bald eagle had flown into the trees behind me, no doubt alerted to the possibility of a meal by the gathering vultures. Though I waited patiently for 30 minutes, the cautious eagle maintained its perch, waiting for me to move on, which I finally did. When my friends arrived, we piled into one car and continued searching for wildlife. Our first stop was to view the swans. Warm days seem to make the wildlife lazy, content to hang out longer, making some species a bit tougher to find. 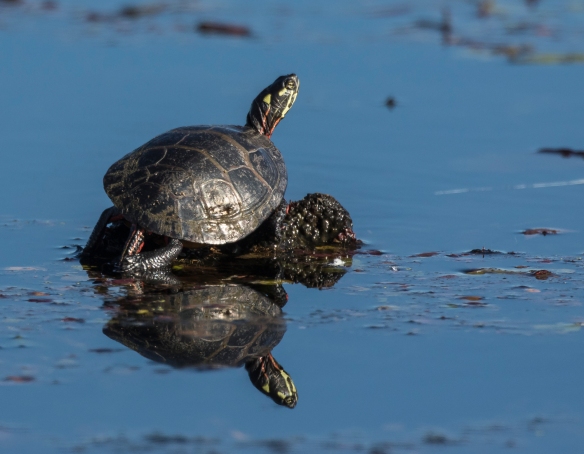 Painted Turtle basking in Marsh A

But lazy winter days also make some species, like turtles, easier to see. As we drove along, there were turtles (mainly a mix of painted turtles and yellow-bellied sliders) basking on almost every log. That made me both wary and excited as we entered the woods, for this is the kind of day you might see a snake, especially “my snake”. I had stumbled upon the large canebrake rattlesnake again last weekend during the Christmas Bird Count at the same hollow tree as 3 years ago. We hiked slowly to the tree, looking carefully around the surroundings in case the rattler was out enjoying the warmth. After looking all around the area without spotting it, I knelt down and shined my flashlight into the hollow – no snake. I moved to the right, and shined the light in the other hollow – nothing. Suddenly, my eye caught a familiar pattern…there it was, a few feet from me, curled up at the entrance, partially hidden behind the grass and vines that now block part of the hollow.

Even after we knew where it was, the snake was tough to see (photo by Janna Starr)

I seem to have a strange affinity (and partial blindness, apparently) for this snake. The others in my group couldn’t see it at first, and then, one by one, they spotted it.

We all jockeyed positions to get a better angle to view the snake which was partially obscured by the vegetation in front of the hole. This rattler (it probably is the same one from previous encounters at this tree) has not lived up to its name, having never rattled in any of my encounters with it over the past few years. I must admit, I wouldn’t mind a little noise the next time we meet.

The telephoto view from the side

Even with all the commotion from its admiring crowd, the rattlesnake remained still, no doubt confident of its ability to defend itself from this group of interlopers. We wandered on, wishing it well until we meet again.

We headed back out to the road, hoping for a flyover of birds from the lake. The evening before, the snow geese had flown out and around a few times, but not landed. As we walked back to the car, we heard them coming. We paused as they flew over toward the far corner of the corn field. At first, a few hundred. That flock went back to the lake and returned with a few thousand. More joined the flock as they began to circle the fields. Some would spin off toward the lake, but more kept coming in, until perhaps they felt they had enough critical mass to make a decision – to land in the field. They finally started to drop down into the corn and thousands more birds came in from the lake to join the circling mass. Finally, several thousand birds were feeding in the corn. After what seemed like a very brief meal (considering all the energy they burned flying around beforehand), they all lifted off and headed back to the refuge of the lake. There is nothing like this anywhere else in North Carolina (or anywhere else in the East for that matter)…thousands of birds filling the sky, golden light tinging their undersides as they noisily fly over you. The true meaning of spectacle, and the reason I keep returning to Pungo.