Look closely at nature. Every species is a masterpiece, exquisitely adapted to the particular environment in which it has survived. Who are we to destroy or even diminish biodiversity?

Yes, it is finally crawling to a close, another season of caterpillar searching, wrangling, and releasing. This one a bit less productive than some perhaps, but rewarding nonetheless. After a couple of caterpillar classes at the Museum and Botanical Garden, we ended with a bang at the Museum’s BugFest event last weekend. It was the usual phenomenal turnout with an estimated 25,000+ attendees. I am never sure how many folks we actually see at out caterpillar booth, but it was a steady stream of curious onlookers for a full 8 hours.

It was so busy this year, that I didn’t take the time to photograph some of our herd of larvae (around 50 different species). As usual, some of the best finds, like the Spun Glass Slug Moth caterpillar mentioned in an earlier post, pupated right before the big event.

This strange beauty never made it to BugFest, preferring to pupate about a week before the big event (click photos to enlarge)

We start searching a week or so ahead of BugFest, and we always lose some of our herd  to the many hazards that caterpillars face –  a few larvae erupted with parasitoid wasps or flies, and some we discovered as they were being used as the larval lunch special of the day for some of the many predators out there. With as many hazards as they face, it is sometime amazing we find any caterpillars at all. 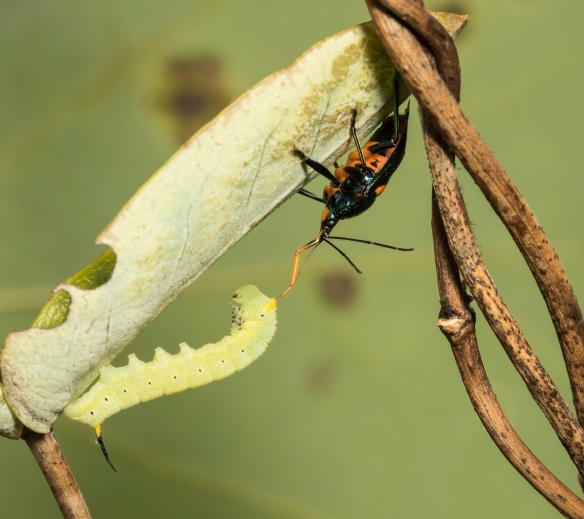 While searching for clearwing moth larvae on coral honeysuckle, I came across this scene – a Florida Predatory Stinkbug with its prey

But, butterflies and moths are prolific little critters, and enough survive to keep it all going. I enjoyed watching some egg-laying behavior of several species in the week leading up to our caterpillar classes, including a snowberry clearwing (aka bumblebee moth) laying her eggs on a honeysuckle vine. I collected one egg and photographed the tiny newly hatched larva five days later.

The show-stoppers this year were two Imperial Moth larvae, one brown in color, the other green. Melissa found both, the brown one when it was a second instar about two weeks before BugFest. She found the green giant the day before, and I wished I could share the looks on the faces of people as they walked along the tables and first laid eyes on that behemoth. 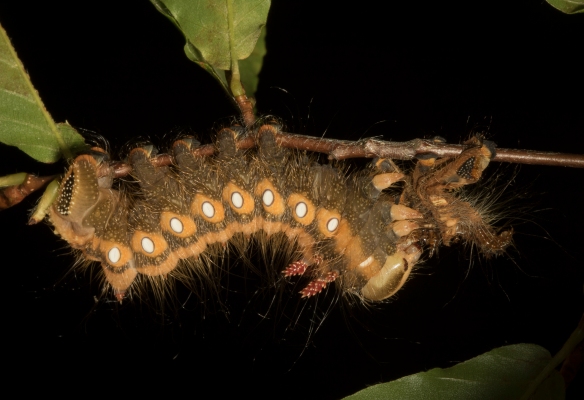 The rest of the critters included a wide range of caterpillars found throughout our region. As I mentioned, I took only a few minutes to quickly photograph some of the larvae before the crowds started arriving and asking questions. Here are a few more of my favorites… 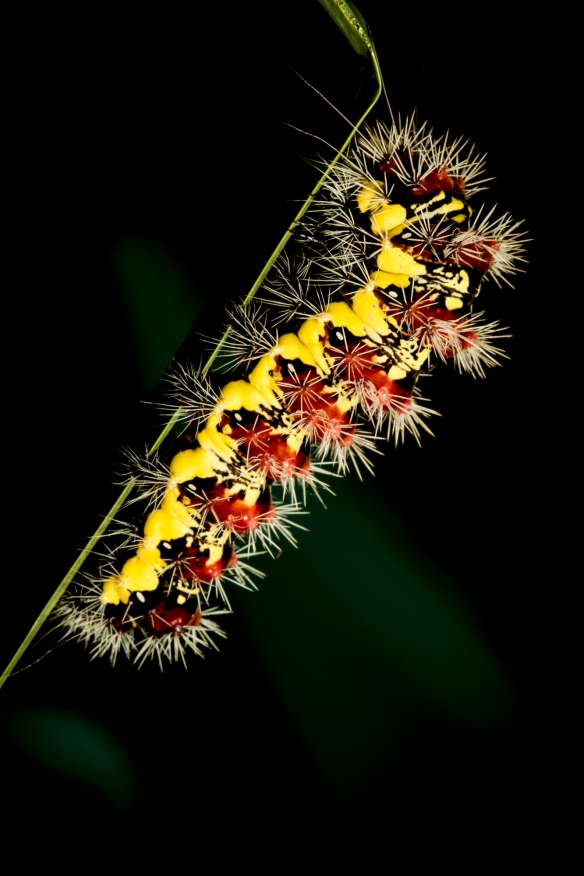 The beautiful colors of a Smartweed Caterpillar

Early instar of a Blinded Sphinx (we think) 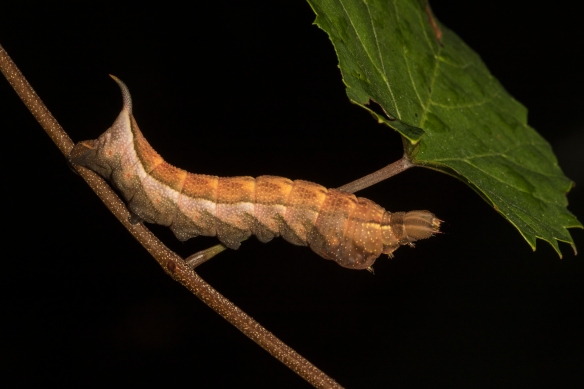 A Hog Sphinx on wild grape

Though the Imperial Moth larva were crowd favorites, my choice for caterpillar of the day was the weird and wonderful Curve-lined Owlet. These bizarre-looking caterpillars feed on greenbrier and mimic the brown, curled edges of dying leaves (and perhaps the vine tendrils). They often gently wave back and forth, looking like a dead leaving moving in a breeze. When I pointed it out to people, most were stunned that it was a caterpillar, so their camouflage seems to be quite effective. 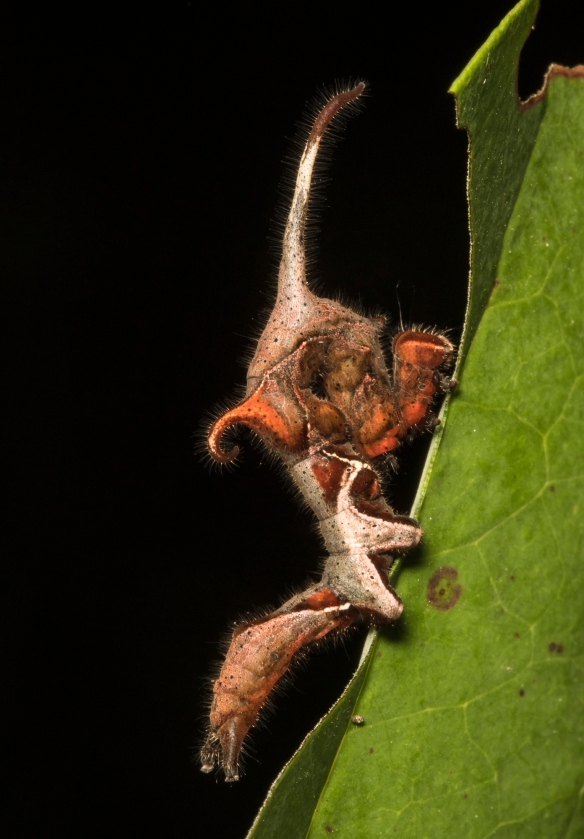 Curve-lined owlet, my choice for caterpillar of the day

The aftermath of all this larval love involves releasing the stars of the show onto their host plants from whence they came. A few that pupated will be housed in proper conditions until they emerge sometime next year, and then they will be released into favorable habitat with the hopes they will create more of their kind. Meanwhile, I may let the macro lens rest for a bit, and see if I can find something a little bigger to ponder while I wander.

10 thoughts on “Another Caterpillar Season”