And surprise it was….they predicted it, and it actually snowed! That has been an unusual happening in these parts for over 450 days (I believe I heard the last measurable snow fall in central North Carolina was about 469 days ago). It started about 3 p.m. Thursday and lasted well into the night. The other surprise was how it affected the trees – it was a wet heavy snow with temperatures dropping rapidly, so ice built up on delicate tree limbs. By Friday morning, it looked as though all our small trees were bowing to the snow gods. 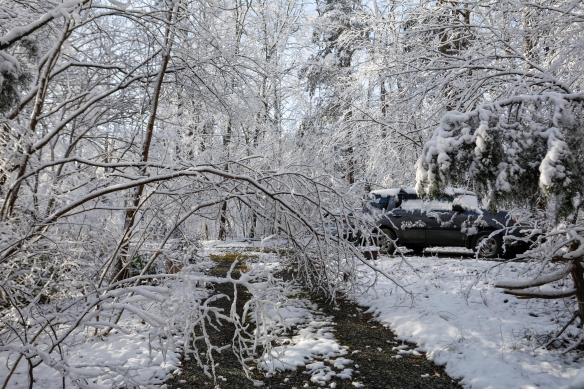 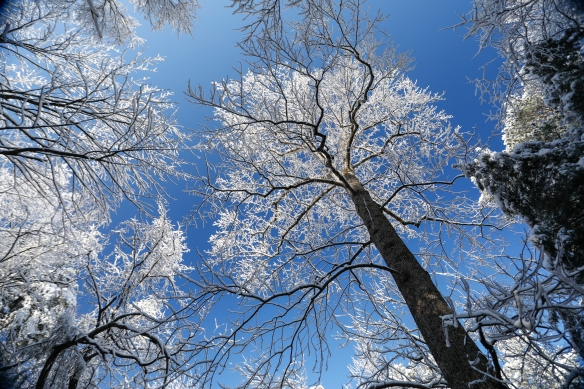 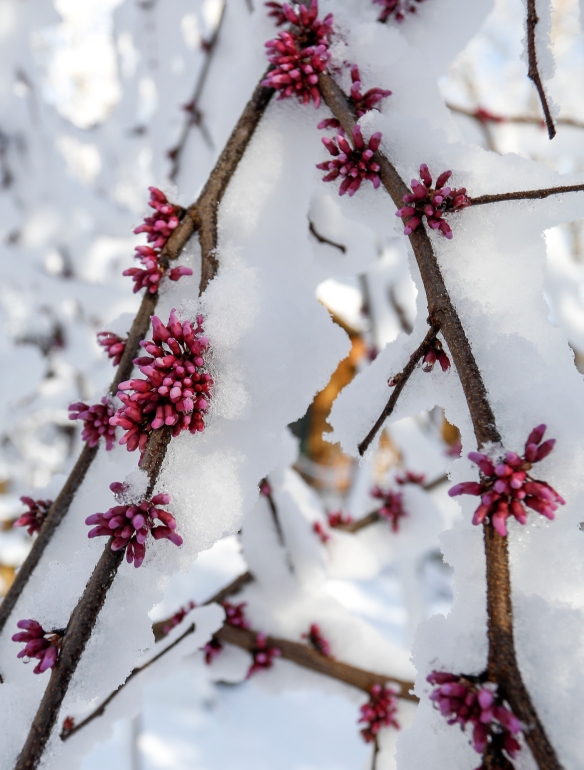 The redbud trees took a hit with several having split trunks or falling over due to the weight of the snow.

With such cold temperatures (in the 20’s) and a crust of frozen snow on most surfaces, the birds were busy at the feeders out back. I sat for a couple of hours watching their comings and goings before I just got too cold and had to retreat. 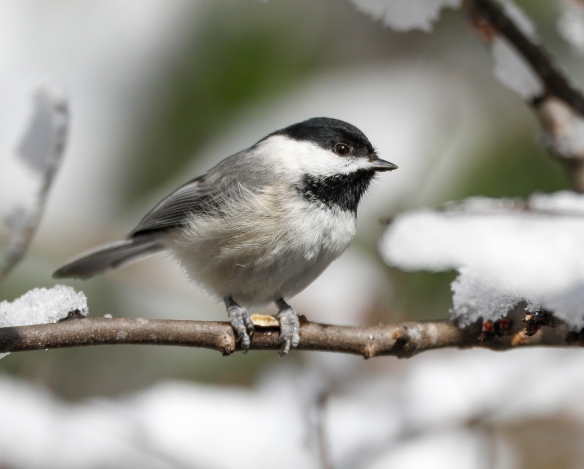 Carolina chickadee with a freshly hulled sunflower seed between its feet.

The most abundant birds I saw around the feeding station were pine warblers. They are the most common warbler we see in this area in winter (most warblers migrate out of our area to warmer climates). They can be found at both seed feeders (another unusual trait for a warbler) and suet (the latter is the preferred feeder here). They tended to come into the feeders in groups (typical behavior of winter feeding flocks) and exhibited quite a bit of aggressive interactions at times. I never managed to grab an image as a pair engaged in their brief battles where they fly up against one another, lock beaks, and spiral downward before releasing and chasing one another. I guess it is always good to have higher goals in life… 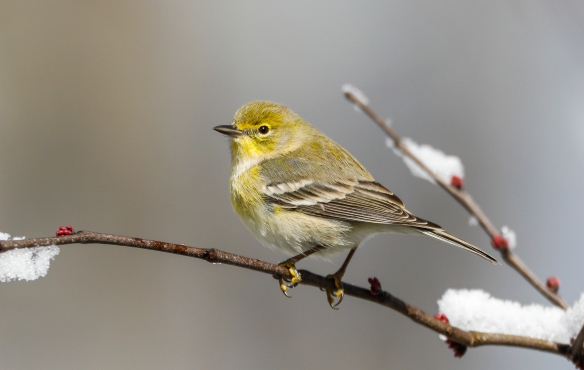 One of several pine warblers that stayed busy at the suet feeder. This one is waiting its turn as a more aggressive one is feeding. 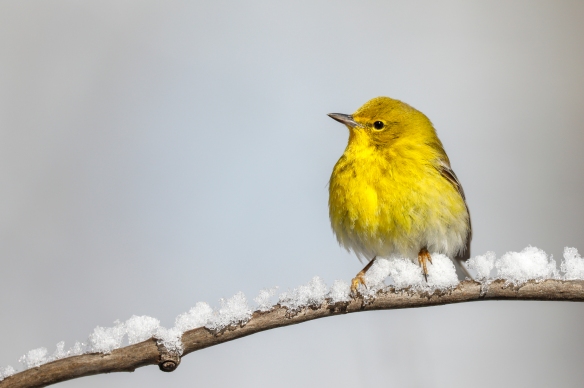 A brightly colored male pine warbler looking his best in the snow. 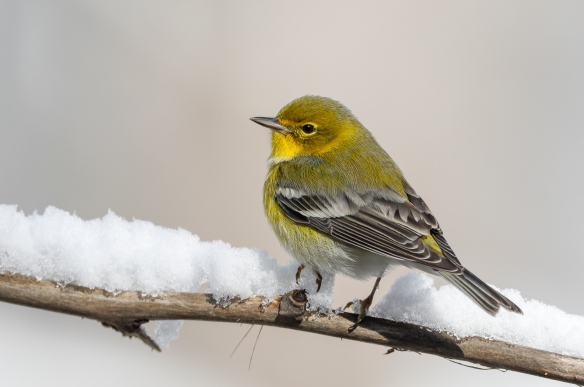 I appreciated the opportunity to take in the subtle differences in color of the pine warblers. 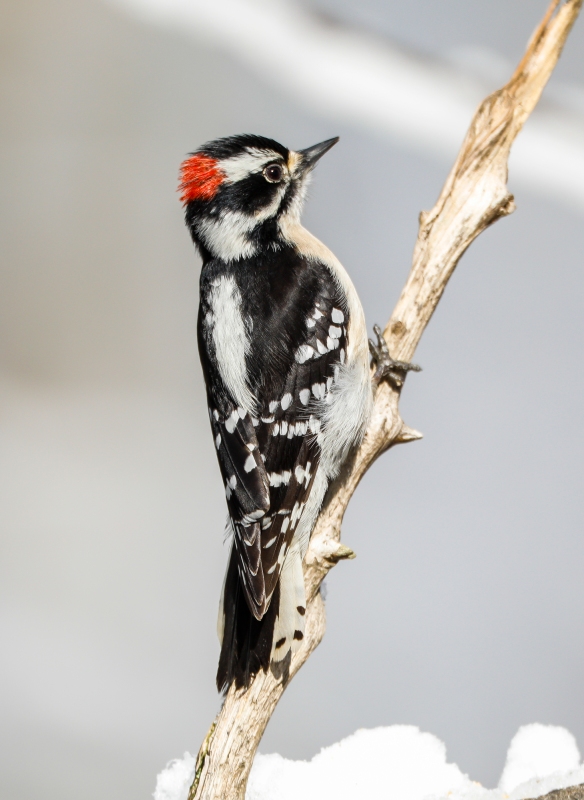 This downy woodpecker is a bit aggravated that the pine warblers are hogging the feeder. 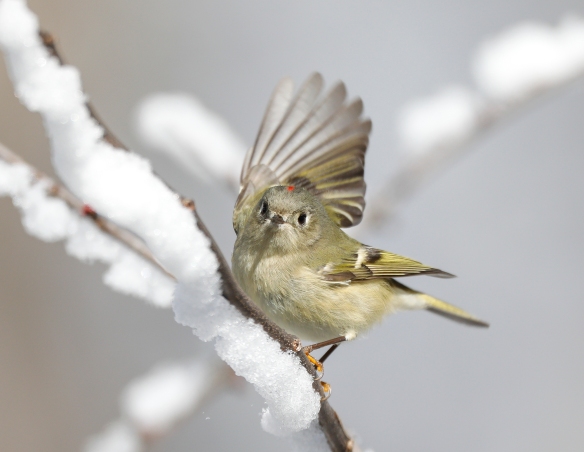 The most difficult subject to photograph – a constantly moving ruby-crowned kinglet. 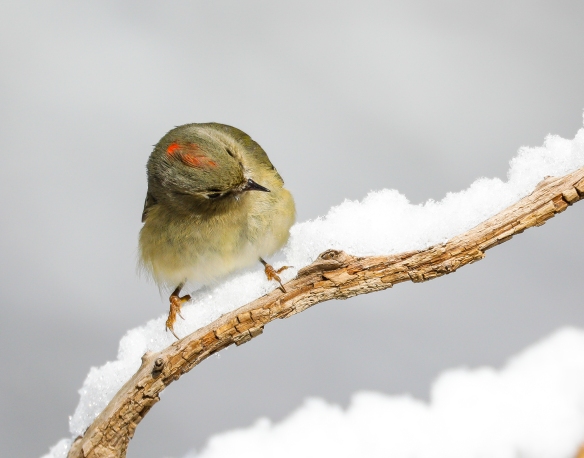 Though I saw it many times, I never captured the full extent of his ruby crown when he was agitated because he just would not sit still long enough. 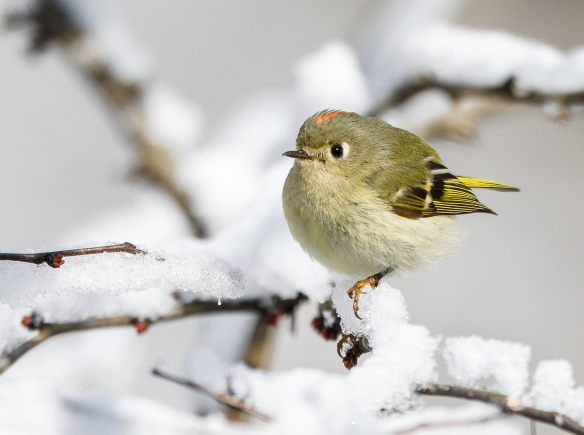 Still one of my favorite winter birds in spite of (or maybe because of) his high speed antics.

The snow is stubbornly clinging here on our north-facing slope, but temperatures are supposed to rise to 50 degrees later today, so I imagine it will all be a memory by tomorrow. Snow in the Piedmont is an excellent metaphor for life – enjoy it while you can.

6 thoughts on “Snow at Last”