A breath of fresh air after a long winter…

That quote is in reference to one of my favorite native trees, the Eastern Redbud, Cercis canadensis. And right now, they are at their peak in our woods, casting sprays of pink blossoms in the understory. 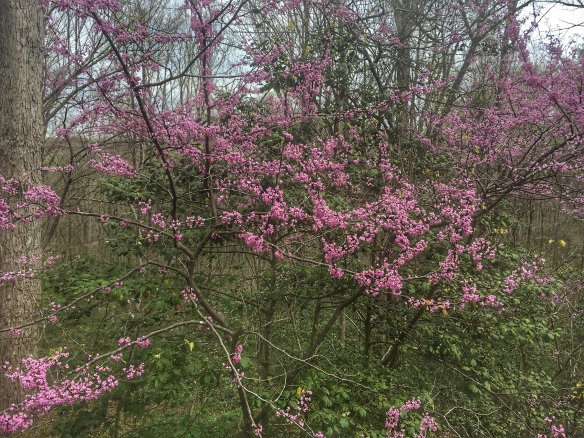 Redbud trees from our back deck (click photo to enlarge)

We have quite a few of these dazzling springtime trees around our house, but relatively few (and certainly no young trees) outside the deer fence as the deer have browsed the young ones for years, leaving only older trees along the roads and scattered elsewhere in the woods. With so much more time at home now, I have been watching all the comings and goings in the trees near our deck. Unfortunately, I did not get out the camera (was busy doing some much needed yard and garden work) on the few recent sunny days when the trees were abuzz with all sorts of bees, flies, and a few early butterflies. It really made me appreciate how important these abundant flowers are as an early nectar source for many of our pollinators. 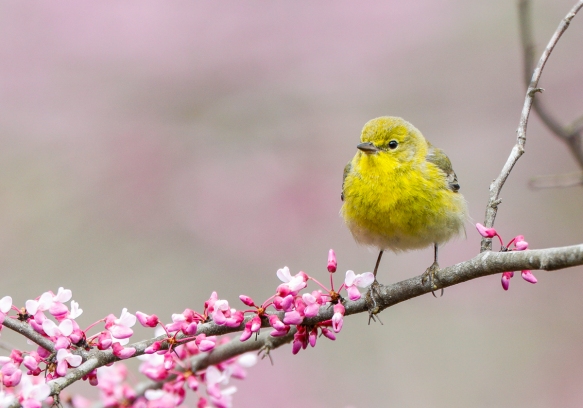 Male Pine Warbler adorning a flowering branch with some bright colors of his own.

Dark-eyed Juncos are still abundant but will soon migrate to their nesting grounds farther north and to higher elevations.

Several redbud branches are close to the suet cage mounted on my deck and serve as a staging ground for birds approaching the feeder. One day last week, I sat on the deck and watched the parade of species as they waited their turn. Most managed to land behind a tangle of branches without a clear chance for a photo, but a couple of notable species shared something I did not know about birds and this tree…

I watched as a few juncos and a male and female cardinal nibbled on many of the flowers. A few times, it almost looked as if the birds were just squeezing the flower, but I also saw them pull off a flower and eat it a few times in the hour or so that I watched.

Female cardinal puling at a flower.

She chewed the blossom and then dropped part of it.

Many of you may know (or may have seen Melissa’s FB post about it) that redbud flowers are actually quite tasty as a treat alone or as part of a salad (or other types of foods). So it should come as no surprise that other critters may find them suitable as a food source. I have often wondered about the use of the incredibly abundant seed pods by birds and other wildlife, but have never seen anything actually eating the seeds. 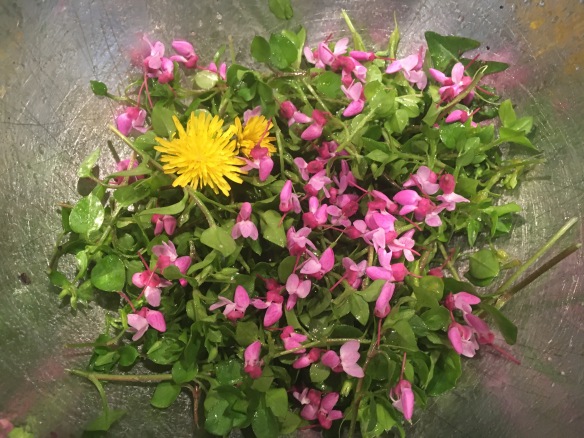 After watching the birds squeeze some of the flowers, I tried a couple to see if there was abundant nectar, but could not really tell anything definitive, other than the flower itself is tasty. The other thing I noticed when I looked closely was how the tiny irregular flowers look a lot like excited, big-nosed dogs with large ears. Maybe its just the self-isolation talking….