Its nest is composed of the frailest materials, and is light and small in proportion to the size of the bird.

A friend and co-worker of Melissa says the wispy call of the Blue-gray Gnatcatcher  (Polioptila caerulea) sounds like a faint “Steve”. So, a couple of weeks ago, when I heard Melissa call out, “Steve”, while scanning the treetops, I knew the little dynamos had returned. Their faint song is pretty much out of my hearing range these days, so it wasn’t until a few days later that I spotted my first one, flitting around some tree branches, waving its seemingly too long of a tail back and forth as it snapped up insects too tiny for me to see through my binoculars. Then, last week, we spotted two together at a small Eastern Tent Caterpillar nest on a cherry tree off our deck. The gnatcatchers were pulling silk from the caterpillar nest for use in their own. In the past two weeks we have also seen Tufted Titmice and Carolina Chickadees at these caterpillar structures, although I only saw the chickadee pull out a couple of the larvae and then drop them (they may be too hairy for their tastes). Gnatcatchers make a beautiful nest similar in construction to that of a Ruby-throated Hummingbird, but larger. I wrote about watching a nesting pair at the North Carolina Botanical Garden in an earlier post. Here is a photograph of that nest showing the cup-like structure made of lichens, lined with plant fibers, and held together with spider and insect silk. 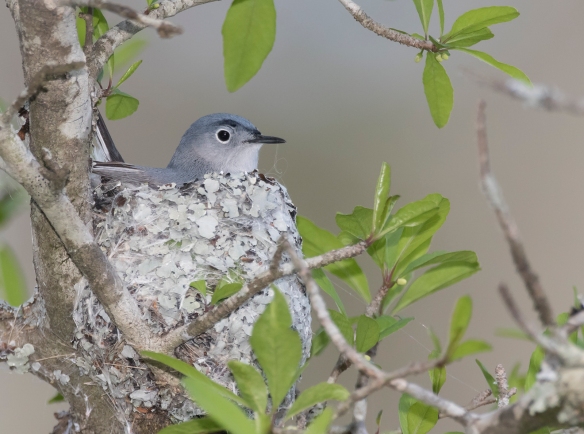 A couple of days ago, Melissa was working on a museum project out on our porch and told me she noticed that the gnatcatchers had been making regular visits to the caterpillar webbing closest to our deck. I grabbed the camera, my 300mm lens, and a tripod, and took up a position on the deck steps. I spent the next two hours waiting and watching. A few times I was rewarded with a frantic minute or so of trying to capture the quick movements of their behavior as they gathered silk. 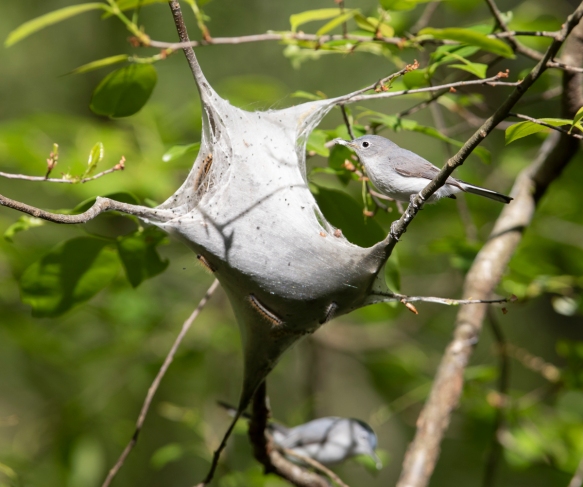 The tent caterpillar nest with both gnatcatchers collecting silk – the female at the main web, the male puling from the silk trails left on the branches by the foraging larvae

There were four silk-snatching visits during the time I sat there, mostly by the female. On two occasions, the male accompanied her and gathered some silk from nearby branches while she pulled from the main web structure. 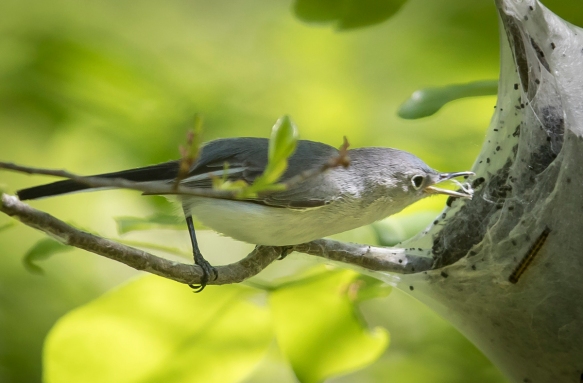 Gnatcatcher snapping up strands of silk 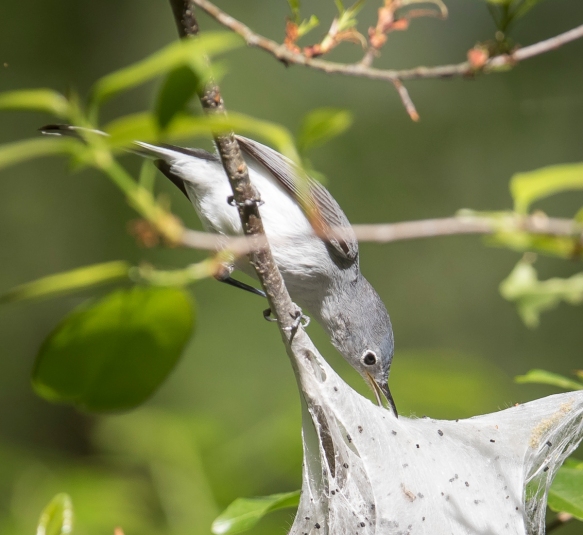 Then she would pull until the silk broke free

After several pulls, she would fly off with the “glue” that holds her delicate nest together

The birds flew off in the same direction each time, so we will be looking for their nest in the coming days. But, I’m afraid the ones we have found here in the past (up to 75 feet up in the treetops) have not been as cooperative for viewing as the one at the garden.