Yes, though you may think me perverse, if it were proposed to me to dwell in the neighborhood of the most beautiful garden that ever human art contrived, or else of a Dismal Swamp, I should certainly decide for the swamp.

I will admit to feeling a little guilty about this, but we recently returned from a two-night camping and paddling trip on the Roanoke River. For the month of April, we had previous plans for two trips to the swamp with friends, and Melissa had one for work. Though we are very fortunate to live in a beautiful wooded setting, we are missing our spring swamp time. So, after discussing if we could manage a trip without putting ourselves (or anyone else) at risk, we decided to go. We both agreed that there is no better place to self-isolate than the camping platforms on the Roanoke. We departed Monday afternoon, following a storm front that left us with a bit of rain and wind for the start of our journey. Our plan was to put in at Gardner Creek between Williamston and Jamesville on Monday afternoon and paddle to the Barred Owl Roost platform the first night. We arrived at the launch site about 4 p.m. with just a slight drizzle. As we paddled away from the highway, the sounds soon became those of the swamp…a peaceful quiet interrupted only by the wind in the trees, a squawk of a Great Blue Heron, or Wood Ducks exploding off the water.

Melissa soon spotted two Raccoons halfway up a skinny tree surrounded by water. One was trying to ignore us by hugging a branch while the other managed to stay partially hidden alongside a clump of Spanish Moss.

Our three-hour paddle seemed to go quickly and we soon were at our home for the night – Barred Owl Roost. This platform is always surrounded by black water, so you really feel isolated and a part of the swamp. And true to its name, we heard Barred Owls cranking up their Who cooks for you calls soon after we arrived. There were also a lot of other birds in, and flying above, the trees – Prothonotary and Northern Parula Warblers, Common Grackles, Great Blue Herons and Great Egrets, and lots of Wood Ducks.

One of our favorite camping platforms – Barred Owl Roost 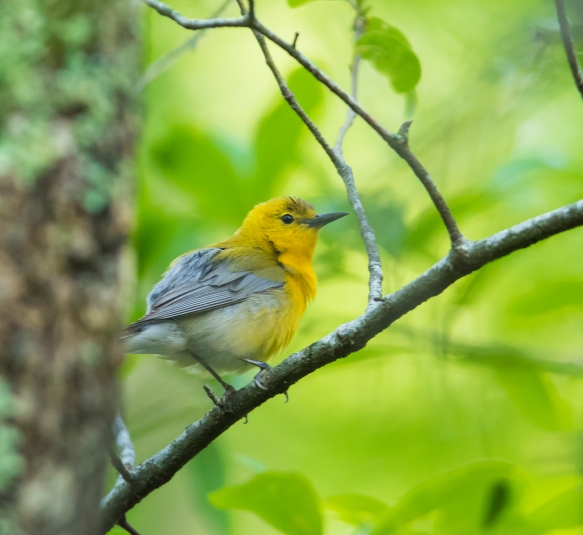 Prothonotary Warblers seemed to be everywhere in the swamp

Many of the Water Tupelo trees have been stripped again this spring by the huge population of Forest Tent Caterpillars. In some sections of the swamp, the majority of the trees are bare and look dead at first glance. And leaf debris from the feeding caterpillars literally covers the water surface in some areas. 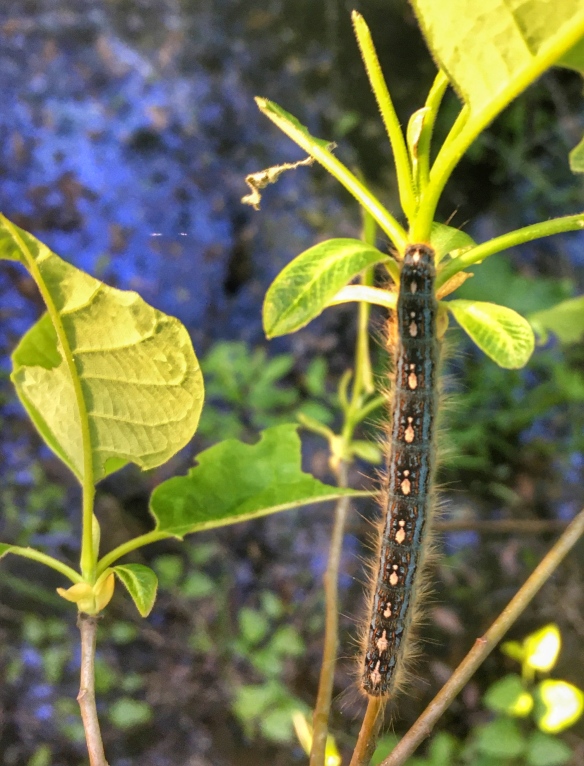 The next morning, we headed down the Gut and out into the river proper for a long day of paddling. Melissa even did an online program with a school class that would have been participating in the Museum’s Shad in the Classroom program this spring as we drifted downriver, giving the students a unique look at where the American Shad live for part of their life cycle. Along the way we saw lots of eagles, herons, and many songbirds (more on those in a future post). 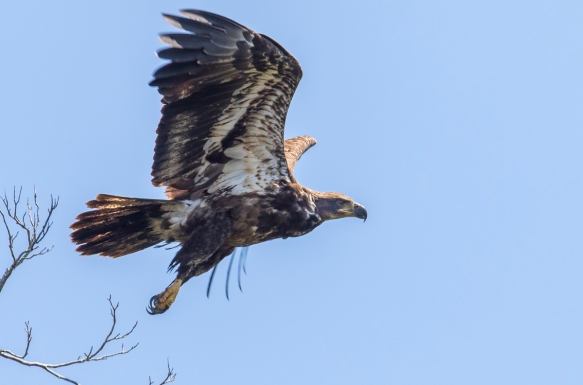 The wind was at our back and the current was strong so we made good time until we got to Broad Creek, where we headed upstream for a few miles to our next platform. This section proved to be a tough paddle with not only the current against us but the wind as well. The slow pace allowed us good views of a variety of wildlife from White-eyed Vireos (Melissa spotted one in the early stages of building its nest) to a lot of snakes hanging out in tree branches.

One of many congregations of Brown Water Snakes in shrub and tree branches along the water’s edge. There were nine snakes in this one tree!

After a tiring paddle, we finally pulled up to our next camping platform, Three Sisters. But all was not as we would have wanted. Someone had caught and cleaned several large fish, including a monster catfish, on the dock at the platform, leaving the skeletons along the shore, This bounty had attracted several vultures (both Turkey and Black) who didn’t care for us interrupting their fish dinner. We used our paddles to push the carcasses into deeper water, hoping the smell would go way (along with the birds).

The view from our dock

The wind helped dissipate the aroma and we were able to finish our day relaxing on the dock at our campsite, watching the comings and goings of an amazing variety of birds. 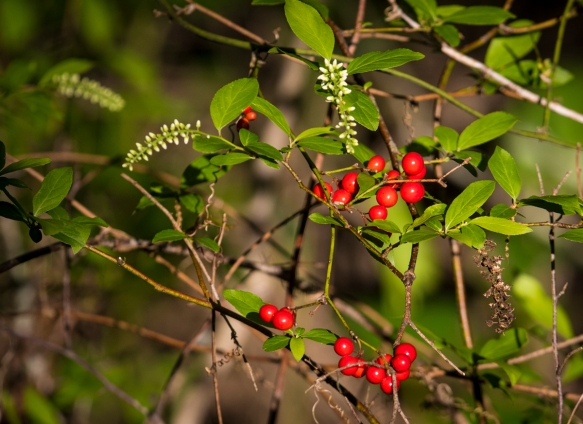 While we sat enjoying the late day light, Melissa heard something back in the forest that concerned her…a growing whining noise (no, not me), reminiscent of a cloud of mosquitoes we had once experienced. We gathered our gear and headed for the tent, expecting to be swarmed, but nothing happened. We discovered the sound source later that evening as our tent light attracted literally thousands of the tiniest mayflies (non-biting) I have ever seen.

During the night, the water level rose about 6 inches, flooding our dock

The next morning, the birds put on an amazing show for us (again, more pics in the next post) and we finally dragged ourselves away and headed out for another long paddle day.

Barred owl scanning the shallows for a meal

The route Melissa chose included a 2+ mile paddle upstream on what is known as the “Cut” (Cut Cypress Creek). This is a narrow creek that connects Broad Creek to the Roanoke River upstream of Devil’s Gut and allows us to do a circuit route without paddling against the much stronger current on the river. The Cut has an intimate feel and is a great place to see wildlife because it is only about 20 feet wide in most places. Though we had heard many owls, we had not been close enough for a photograph so at one point I asked Melissa to find us a close owl in sunlight. Literally 30 seconds later, she spots one down low (in the shade, but still…). She was proving her naturalist skills throughout the trip, spotting amazing critters everywhere and hearing tons of songbirds. One of the coolest finds was a Mink swimming across Broad Creek. It disappeared into the swamp forest before I could get my camera out of the dry bag, but it is always a good day when you see a Mink.

Adult Bald Eagle on the river

Once we hit the river, we could relax and let the current help carry us. A few miles passed quickly and the we headed back upstream along Devil’s Gut. Once again, our pace slowed, and we saw more wildlife as we paddled along the edges of the swamp. 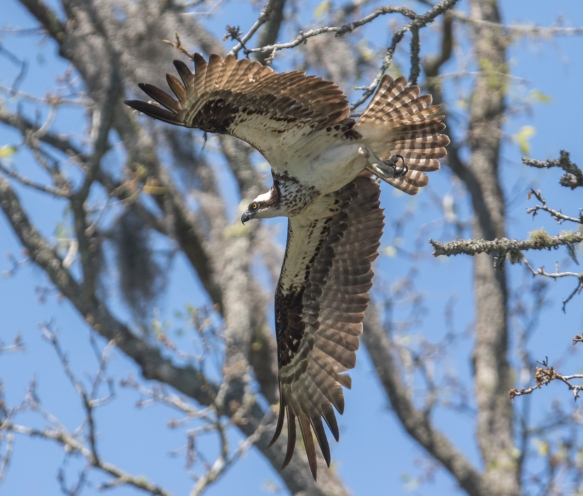 Osprey taking flight as we paddle underneath

Basking turtles were a common sight

Melissa spotted another Raccoon feeling its way along the edge of the swamp. We drifted over for a closer look and spent the next 15 minutes watching it search for food. It barely even looked at us the entire time and was focused on digging and sniffing in the shallows.

A Raccoon snacks on a tasty treat found on a log

It seemed to make a point of walking along every log it encountered and on one, it found something to snack on. We could see what looked like a red rope that it grabbed and was loudly crunching. Close looks at the images once we returned show what looks like an amphiuma (an aquatic salamander common in these swamps) that something else may have caught and partially consumed.

As we neared the end of our paddle, I once again asked Melissa to find me another owl to photograph. This time it look a little longer (maybe a minute) and she spotted one sitting inside the edge of the swamp in a cypress tree.

Just before we reached our launch site, she saw something down low on a tree trunk on one of the few spots of dry land we saw on the entire trip. It was a flying squirrel clinging to the tree, out in broad daylight. We watched it for several minutes and it moved a little, but mainly just clung to the tree. Not sure what was happening, but it added another species to our impressive list of wildlife along the river. 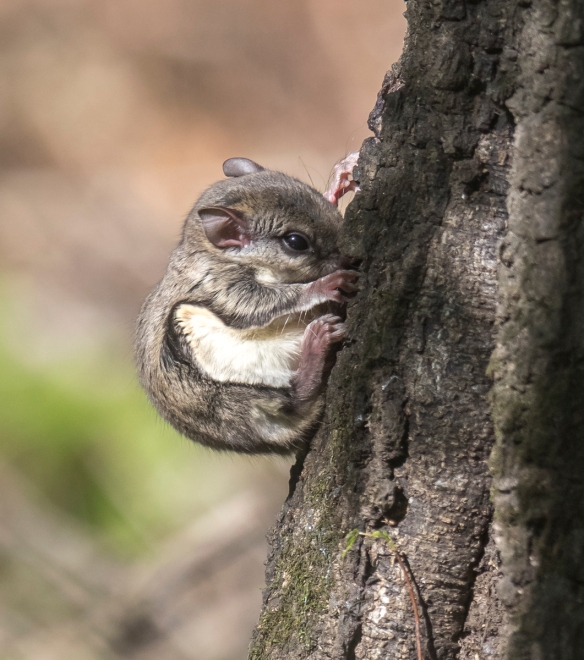 We paddled over 30 miles and had been totally isolated on the river for two and a half days, seeing only some fishermen at very safe distances. It was the prefect way to self-isolate and get some much needed outdoor recreation. We give thanks to those with the foresight to preserve this magical place and to create the paddle trail that allows such great access. More on the trip in the next two posts.