There is never enough time. Though the days are incredibly long, I still feel the pressure to move, to see more, to drive to another spot in hopes of seeing something spectacular for my group. And, of course, they must see the prime attractions of the park – Old Faithful, the Grand Canyon of the Yellowstone, the incredible thermal features. But those areas can be so crowded, so hectic. That is one of the reasons I love the northern section of the park so much…the expansive views and smaller crowds, plus the incredible wildlife, make it easier to feel connected to the park and a to gain a sense of getting away from it all. This is also true as you pass out the northeast entrance of the park and head out along the Beartooth Highway, considered by many to be America’s most scenic roadway. 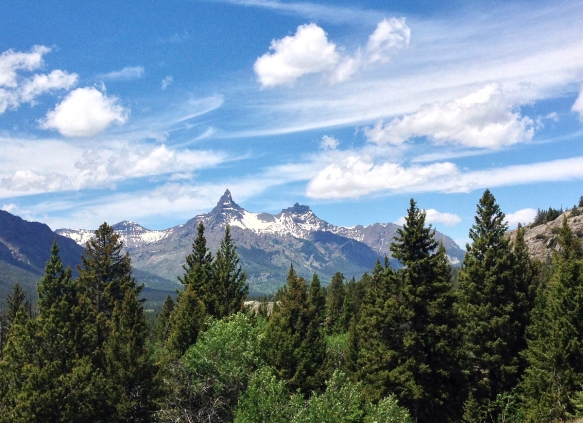 I had originally planned a trip to the Beartooths on the last full day of our trip, but a variety of factors caused me to move up that plan and we headed north a few days early. A quick stop for lunch at a scenic pullout gave us time to admire the view, taking in two prominent glacial-carved peaks – Pilot and Index. As we gained elevation we passed the beautiful aquatic mirror known as Beartooth Lake. But as we climbed higher, I could see the top of the mountain was shrouded in clouds. Hoping it would clear, we kept driving.

Socked in at Beartooth Pass

But it only got thicker and more gray, to the point where we could see only a few feet in any direction, not the glorious vistas or wildlife viewing I had hoped for. We turned around near the top and returned to Silver Gate.

A couple of days later, we joined my friend, Dan Hartman, for a short hike starting part way up the road toward the Beartooths. One of his favorite wildlife areas is an aspen grove near the road that has many species of nesting birds.

Quaking Aspen are not only beautiful trees, they also provide excellent habitat for cavity-nesting birds. After spending just a few minutes in this grove, we had spotted the nests of several species including Hairy Woodpecker, Northern Flicker, Red-naped Sapsucker, House Wren, and Mountain Bluebird. Although I could have spent several hours in this productive area, I decided to head back up to the Beartooths since we were part-way there and my group had not yet seen the top of the mountain. Dan agreed to go with us, so we headed up the highway following his car.

Grizzly Bears along the Beartooth Highway

We had barely gone 100 yards when he stopped, pulling off the highway, and jumping out of the car with his camera. As I pulled up I was stunned to see two young grizzlies down over the bank. I grabbed my camera, which still had my telephoto on it from the aspen grove, and jumped out next to my car. We all took photos of the bears, heads down, actively feeding. Another car pulled up and both bears paused momentarily and looked their way. 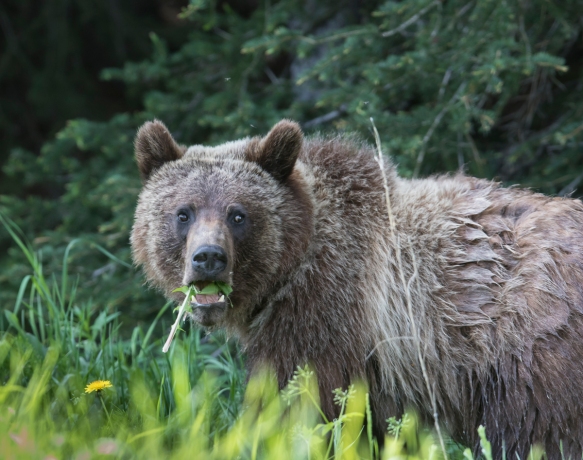 As I watched the bears I noticed they were mainly feeding on one of the more common roadside plants – Dandelions. Looking at the photos back home, almost every bear bite captured by my camera was a Dandelion flower or leaf. The only other food item I detected was some Horsetail, another common plant common along the roadside.

These bears are probably siblings, most likely 3-year-olds, out on their own for their first season (grizzly young stay with their mother for two years). They seemed focused on feeding and basically ignored us except when another car would drive up. Being outside the park, there was not much traffic, but when a few guys on motorcycles stopped with the engines chugging, both bears took notice and stood up to check out the noisy interlopers. Finally, we decided to move on as the bears decided to ease back into the treeline, making them almost impossible to see from the road.

View from high on the Beartooth Highway

Climbing higher up the mountain we could see the changing landscape as trees dropped out and snow still covered large patches of the rocky terrain. 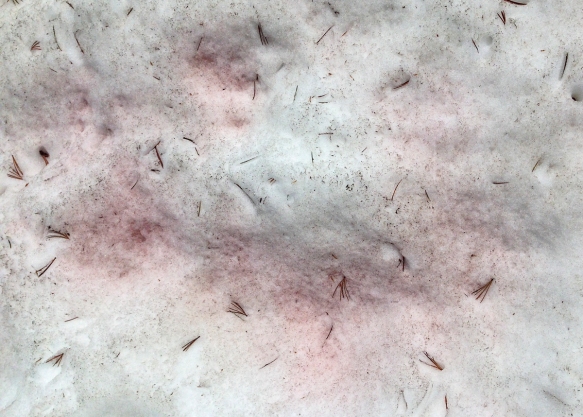 The high elevation views are also interesting if you glance downward. Here and there at these heights you may find an anomaly known as watermelon snow. This pink snow is caused by a cold-loving algae that has a secondary red pigment in addition to chlorophyll. The red pigment probably plays a role in protecting the algal cells from the intense sunlight at these altitudes. It may also absorb heat and hasten the melting of the snow around the cells.

The roadway gets up over 10,000 feet above sea level as you go over the pass. Gusty winds are a common companion at these heights and I always marvel at the group of animals that make this landscape their home including Yellow-bellied Marmots, Pika, Rosy Finches, and the non-native Rocky Mountain Goats. We stopped to view a band of several Rocky Mountain Goats grazing on the alpine vegetation on the wind-swept slopes. They gradually worked their way over the hill, vanishing from view. If you are ever in this part of the Yellowstone region, I highly recommend a side trip up the Beartooth Highway. I always feel as if I am in a totaly different world, a world of sky, snow, rock, and animals adapted to extremes. And it is a place where feeling the wind in your face and simply taking a breath can make you feel so vibrant. It is a wonderful tonic…perhaps we can learn something from Rocky Mountain Goats and Pikas.