I will admit to not quite feeling that happy to wake up to the downpour this morning, but somebody did. At least, they seemed happy right after the deluge stopped. I looked out the kitchen door to check on our little vegetable garden (one of the few down sides of living in our woods is a lack of sun for vegetables, so the garden is small) and spotted something on one of the fence posts. 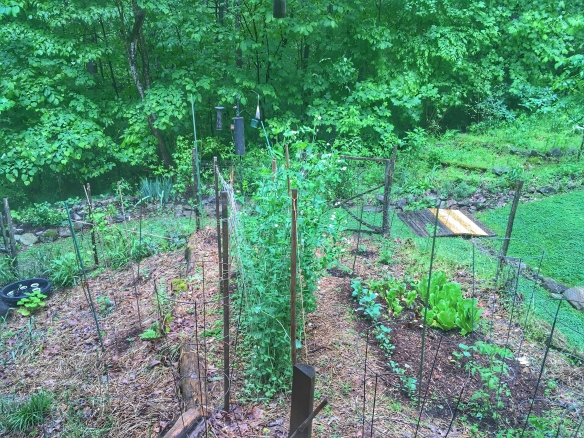 It was our resident male Carolina Wren singing his little heart out. He looked a bit ruffled after all the rain, but he was determined to let everything know he was in good spirits. I grabbed the camera with the telephoto on it and eased out onto the side porch. The only view of him I had was through a small circular gap in the pea plants growing on the line trellis. He serenaded the world for a couple of minutes, dancing his way around the fence top to make sure no matter where you were in the yard, you could hear his loud tea- kettle, tea-kettle, tea-kettle lyrics. So, here is Mr. Wren, singin’ and dancing in the rain…

After a brief shake (in which he lost a feather), the song resumes

Here’s looking at you 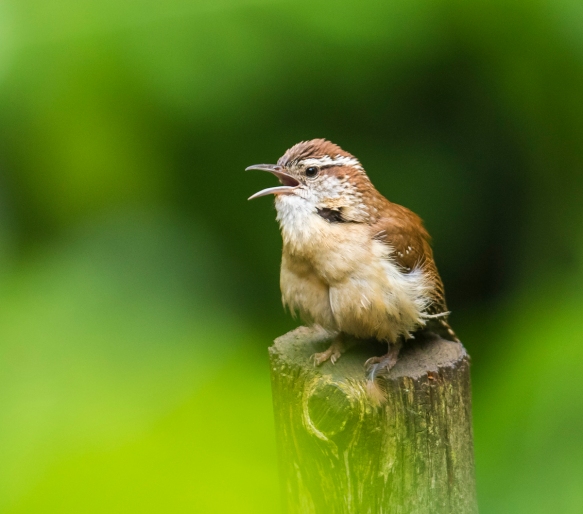 Okay, I can move on now

Caroilna Wren in brush pile in the yard (click to enlarge)

While doing some chores yesterday (sweeping unbelievable amounts of accumulated pollen off the screen porch) I heard the resident Carolina Wrens scolding something. Since their new nest location is right off the screen porch I thought it might be me disturbing them, but it was so emphatic I decided to take a closer look. The nest this year is under the top of the propane tank, which sits off the screen porch.

One wren was bringing a food morsel to the nest and was still scolding when I went out (that is a neat trick, your mouth full of bug and you still can screech and squawk at the top of your lungs). Now I am thinking snake. I looked around and didn’t see anything, but then noticed something move on the support column for the porch.

At first glance I thought it was a huge slug, but then realized it was the underside of a small loop of a snake’s body extending out from the other side of the support. I poked my head around and there was the cause of the wren’s concern – a young Black Racer. The snake was climbing down the support and quickly vanished into the pile of pipes and cinder-blocks stashed under the porch. 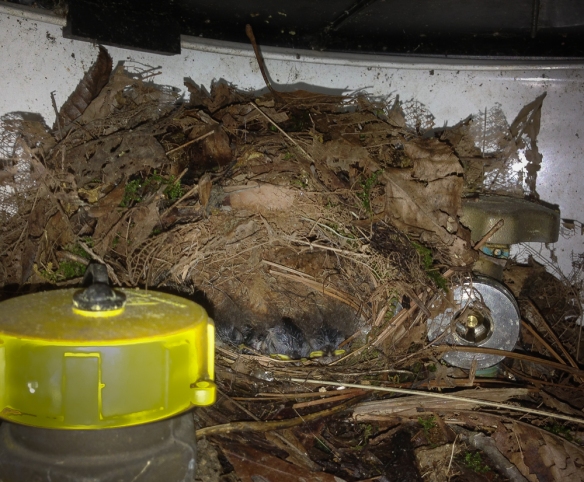 I looked inside the propane tank with my flashlight and all was well – I could see at least 4 baby wrens at the entrance to the nest. The sides of the tank may (I stress may) be too slick for the snake to climb on, or perhaps it just had not yet zeroed in on where the nest was located. At any rate, it will be interesting to see if the baby wrens make it another week or so until fledging after such a close call.

Carolina Wrens are one of my favorite birds – always energetic; exuding perkiness with their inquisitive attitude, bounce in their step and their slightly cocked tail. They are monogamous, and maintain their pair bond and territory throughout the year. In spring, males may build several nests and the female chooses one to her liking. As many of you may well know, nests can be built almost anywhere there is a somewhat protected place or cavity a few feet off the ground. I have seen them in boots on a porch, under the hood of a truck, in a football helmet hanging in an open garage, and in a milk jug with the top cut out sitting inside a shed that had a gap under the door just large enough to allow a wren to squeeze through.

Nests are dome-shaped with an entrance on the side. They are made with a variety of materials including dried grass, leaves, sticks, pine needles, mosses, feathers, paper, and string. Most I have seen also have pieces of shed snake skin (or of plastic film or wrap that resembles snake skin). Scientists speculate that snake skin use in birds nests (several species of birds routinely add snake skins) is a deterrent to would-be egg predators, especially mammalian predators such as flying squirrels, that might become prey to snakes. Elizabeth Medlin and Tom Risch of Arkansas State University conducted a study using artificial nests in a cavity (simulating Great Crested Flycatcher nests) and quail eggs with snake skins in some nests and not others. The results supported the notion that snake skins deter the locally dominant mammalian nest predator, flying squirrels, from entering a bird nest and eating the eggs. None of the 40 nests with snake skins were attacked. Of the nests without, 20 percent had eggs eaten by flying squirrels. 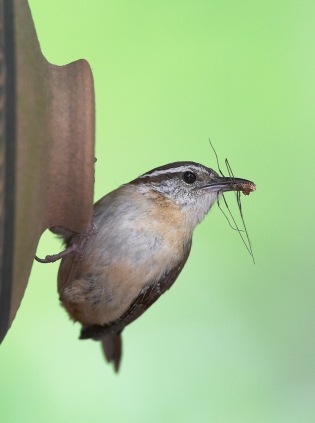 I guess more study is needed to know if the plastic is as effective. I can’t quite tell from this photo whether that is real or faux snake skin in this nest. I am hoping this nest makes it, as it is always fun to see the wren family moving about the yard.