There is no story that can’t be improved by adding zombies.

Walking down the driveway this morning I noticed something on a twig that was propped up against a tree trunk. When I leaned in for a closer look, I said to myself, “you gotta be kidding me, another one?”

It looked like another fungus-stricken cricket similar to the one I described in yesterday’s post. But, the more I looked, I realized I couldn’t quite tell exactly what was under those fungal stalks. As I was trying to figure this out, I detected something else about two feet away on the stem of a sapling.

Another Carolina Leaf-roller infected by the Zombie Fungus

This time there was no doubt…another cricket infected by the Zombie Fungus. Unlike the one yesterday, this one is obviously a female because of the presence of an ovipositor (sword-like structure for laying eggs) on the rear. I suppose the first thing I saw on the nearby twig is also a fungus-infected cricket, just one that has deteriorated to a greater degree. What’s going on in this yard? A Zombie Apocalypse? A Zombie Cricket Apocalypse? That doesn’t sound right. Since I am unschooled in the world of zombie vocabulary, I went inside and looked up what you call a group of them. Who knew there were so many resources on the internet for such things? One reference laid it out in great detail. If only a small area, like a building, or a graveyard, has a group of zombies, it is called an infestation. If a few acres are involved, it is a horde. If an entire community has them, it is called a plague. If an entire country or continent has zombies, it would be called a pandemic. And, if the entire world is overrun with zombies, then it is a Zombie Apocalypse. So, what do you call a group of crickets (a stretch of rainy days does strange things to me apparently)? The answer – an orchestra. That means the technical term for what is happening in the yard is an orchestra infestation. That doesn’t sound quite as bad I suppose.

Of course life is bizarre, the more bizarre it gets, the more interesting it is. The only way to approach it is to make yourself some popcorn and enjoy the show.

I have a program coming up in a couple of weeks on things to look for in nature as winter approaches. So, this past Saturday, I decided to walk around the property and see what might inspire me. My Halloween hike turned out to be very productive and appropriately bizarre. I hadn’t even made it out of the yard when something caught my eye – a shape on the underside of a small Redbud sapling. I moved over for a closer look…whoa, spooky indeed.

A bizarre-looking bug caught my eye (click photos to enlarge)

I have encountered creepy critters like this a few times in the past, so I knew a little something about this phenomenon. My first thought was this was some sort of cricket or grasshopper that had been killed by a parasitic fungus. I reported on these entomopathogenic fungi in an earlier post on Soldier Beetles. The fungus on this cricket has a very different appearance, so I took a few photos and went inside to see what I could find on the internet.

After searching the web and Google images on parasitic fungi on crickets, I think my little corpse is a Carolina Leaf-Roller, Camptonotus carolinensis, a type of wingless cricket. And, if that is the case, then this fungus is probably a species of Cordyceps (or perhaps Ophiocordyceps), a group of fungi that attack various insects. These insect-eating fungi have been collectively called Zombie Fungi, for the way they infect, and, ultimately kill, their hosts. They have received a lot of media attention since they were featured in a clip on ant-killing fungi on David Attenborough’s nature masterpiece, Planet Earth, a few years ago. It is well worth the couple of minutes it takes to be horrified by nature’s strangeness.

Research is uncovering more about how these entomophagous fungi function. The basic pattern is as follows: a passing insect encounters a fungal spore in its wanderings that gets attached to the outside of the insect’s body, where it germinates. The fungus then enters the exoskeleton. It may use enzymes to penetrate the tough outer layer or it may enter, as one research paper indicated, by use of a specialized pressing structure called an appressorium. This organ forms a needle-like peg that presses against the cuticle and punctures it. Once inside, the fungus starts to grow mycelia (the vegetative part of a fungus that is made up of hair-like hyphae). The fungus can then absorb nutrients from its host and grow. Now things start to get really weird…

Within a few days after infection, the host insect begins to behave differently due to chemicals secreted into its brain by the invading fungus. Studies have shown that ants infected by one species of zombie fungus tend to crawl up on vegetation and lock onto a leaf with their mandibles. They soon die and stalk-like structures grow out of the ant to release spores. By altering the behavior of the ant, by making it climb up off the ground and attach its soon-to-be-dead body to the vegetation, the fungus ensures its spores are released in an environment favorable to their dispersal. The same is probably true of my dead cricket. It has been manipulated into a good spore-release position on the underside of a twig a couple of feet above the ground. The cricket appears to be fixed in place by another mechanism seen in body-snatching fungi. Specialized hyphae burst through the legs and and other body parts to anchor the hapless host to the twig. 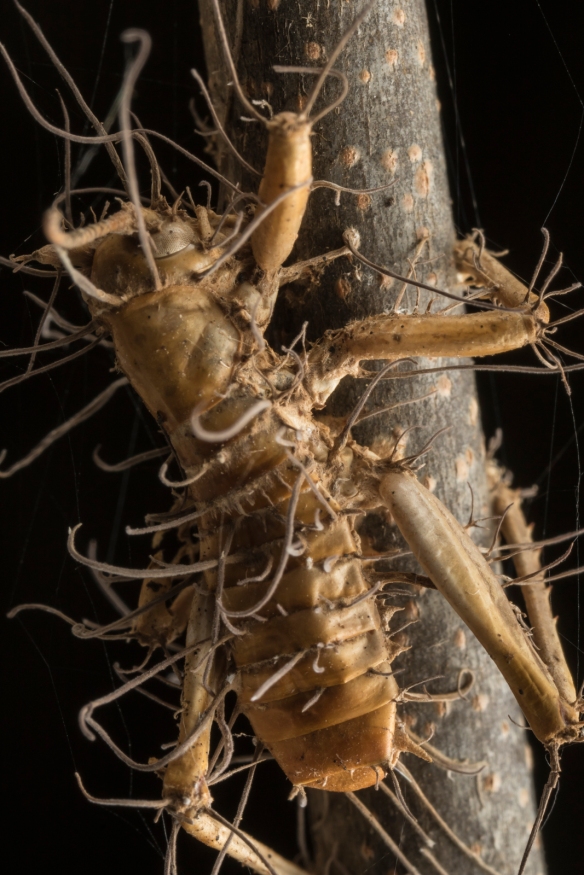 The zombie effect is real

As I read more, it just kept getting stranger. For example, there seems to be a killer fungus in the tropics that attacks the zombie ant fungus, essentially covering it up and preventing it from releasing spores. And, Studies at Penn State, have revealed that one species of ant-killing fungus associated with a species of Carpenter Ant in South Carolina is capable of killing other species of ants, but not manipulating their behavior. The scientists conducted a series of experiments exposing the brains from several different species of ants (including the host for this fungal species) to the fungi. The fungus behaved differently (secreting a host of chemicals that are known to alter brain function) when in association with their usual host ant species, but not when confronted with the brains of the others. One researcher stated “it is impressive that these fungi seem to ‘know’ when they are beside the brain of their regular host and behave accordingly.” My favorite quote from the article about their research was this summary of this seemingly otherworldly behavior – “This is one of the most complex examples of parasites controlling animal behavior because it is a microbe controlling an animal — the one without the brain controls the one with the brain“. Something else that interested me about their latest research is that it is the first time a species of North American ant with its parasitic fungus has been studied (all others have been tropical). They credited an amateur naturalist in South Carolina with bringing attention to this species through her incredible macro-photographs posted on her Flickr site. It shows, once again, the value of citizen science and natural history observations. 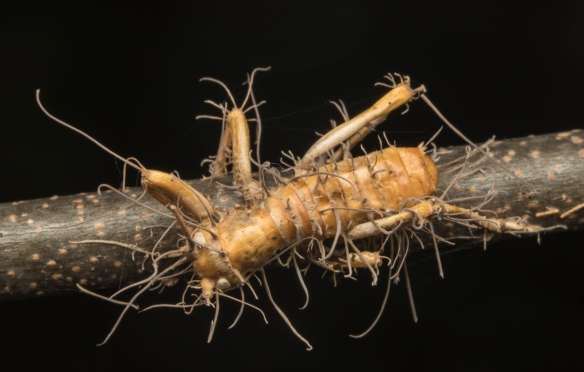 Bizarre is as bizarre does

As if all this seemingly alien biology isn’t strange enough, I also came across some cultural references to this phenomenon. One item mentioned the medicinal value of a Cordyceps fungus from high elevations of the Tibetan Plateau in Asia. C. sinensis has been used for centuries in Chinese medicine for conditions ranging from fatigue to ailments of various organs such as the kidney, heart, and lungs. It is one of the rarest and most expensive forms of Oriental medicine because of its highly specific growth environment and restricted geographical range. The fungus grows from the head of one species of infected caterpillar that burrows into the soil in these alpine environments. I was puzzled as to how it could be collected for medicinal use until I saw some photos online. Unlike my cricket’s thread-like projections, C. sinensis grows to lengths of a few inches and looks more like your little finger in overall size. Wild collected fungi sold in 2008 for as much as $30,000 per pound in places like San Francisco. There are now means of artificially cultivating the fungus and research is underway to verify its value for treating many diseases, including some forms of cancer.

And, lastly, as I was wrapping up my reading, I came across something befitting the day of my discovery. Reading the moniker, “zombie fungus”, on Halloween of all days, started me thinking about the what ifs of this ghastly group. It turns out these fungi have also served as an inspiration for one of the most popular and award-winning video games in recent years. The action-adventure game, The Last of Us, was inspired, in part, by the Planet Earth video clip I mentioned at the beginning of this post. The game’s plot explores the concept of the Cordyceps fungus evolving and infecting humans, and the results of an outbreak of this infection. Wow, a classic case of truth being stranger than (or at least inspiring) fiction.

That’s probably enough bizarre stuff for one Halloween hike. I think I’ll go have some popcorn…