After the incredible experience with the Snowy Owl at Hatteras last week, I waited in line for an hour and a half for the emergency ferry to get off the island. Bright and early the next day, I headed to Lake Mattamuskeet, always an incredible place to experience the first light of a new day. But this morning was going to prove difficult for a sun-over-the-lake image as the fog was as thick as the proverbial pea soup. I drove at a cautious pace on my way down from Columbia since this is prime deer and bear habitat, and I wanted neither to become acquainted with the front of my car. I decided to bypass the usual spot for greeting the morning sun on the causeway that stretches across the lake, and looked, instead, for something close to shore that I might actually be able to see in the fog. 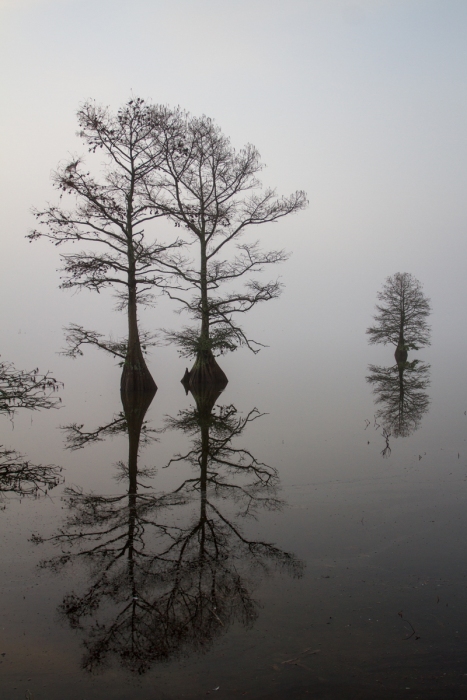 What I found was a surreal scene as the pale light of the rising sun tried in vain to penetrate the gray curtain laying across the lake. A few skeletons of cypress trees in the foreground provided the only depth in the scene. 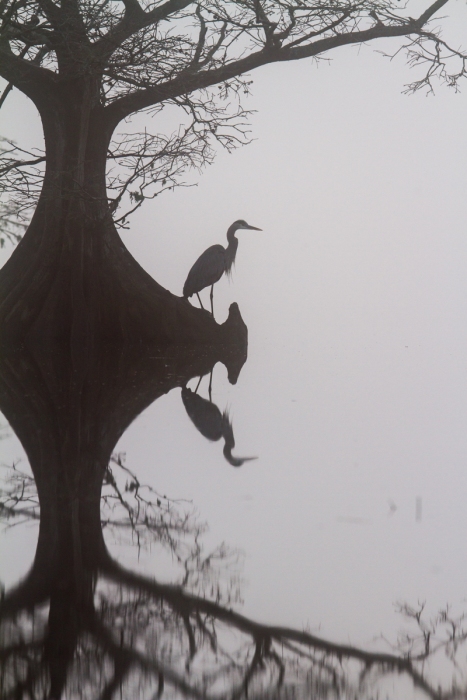 Then, a Great Blue Heron flew out of the mist and landed with a squawk, and became frozen in the gray painting. 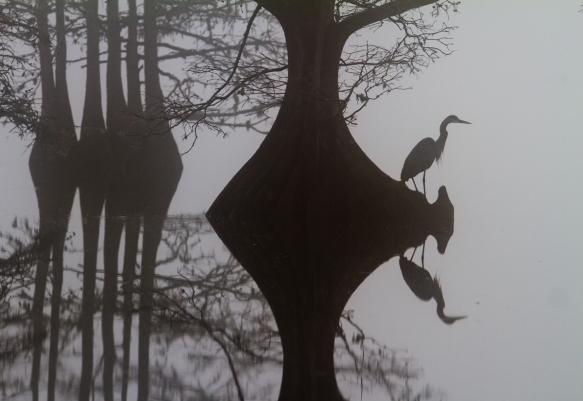 I took several shots but I’m not sure which one I like the best – a tight view of the lone cypress and heron, or a wide view that includes some other tree silhouettes. 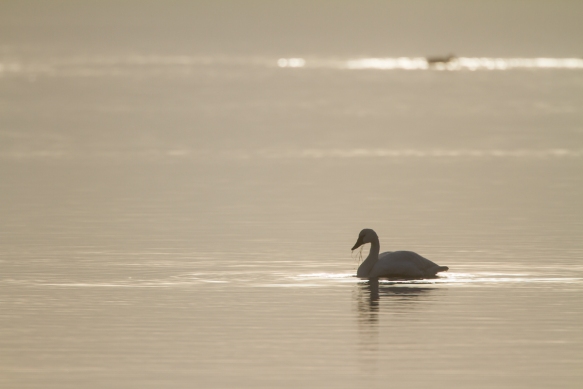 The sun was starting to win the battle as I drove across the lake. A few Tundra Swans fed silently near the road, making glints in the water as they probed the lake bottom for some breakfast of aquatic vegetation. 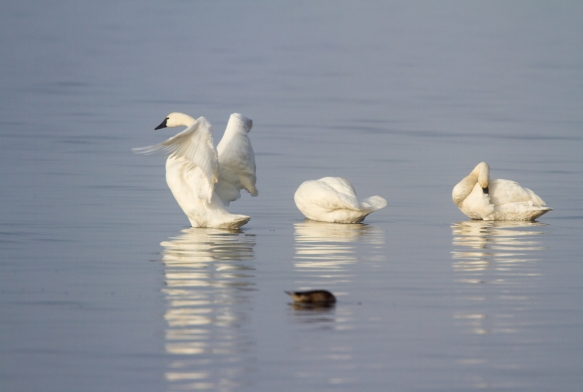 A few minutes later, and the sun claimed victory as it glowed on a group of waterfowl farther down the road. This area is thick with Tundra Swans and Northern Pintails right now, with a variety of other waterfowl in smaller numbers (American Wigeon, Green and Blue-winged Teal, Northern Shovelers, Ruddy Ducks, Buffleheads, American Black Ducks, etc.). I shared some of these excellent views with some of my former co-workers from the Museum, who happened to be leading a group of folks that same morning. It was, indeed, a great day for sharing this incredible place with good people. 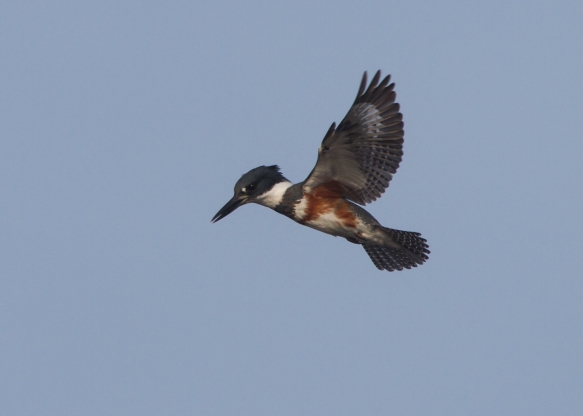 While sitting alone with the swans, I was entertained by a couple of Belted Kingfishers as they hunted. They would swoop in, hover for a what seemed like a minute or two, and then either swoop to a new spot, or, if they spotted something, plunge headfirst into the water. After several failed attempts, I saw one finally catch a small fish and fly off to eat its meal in peace. 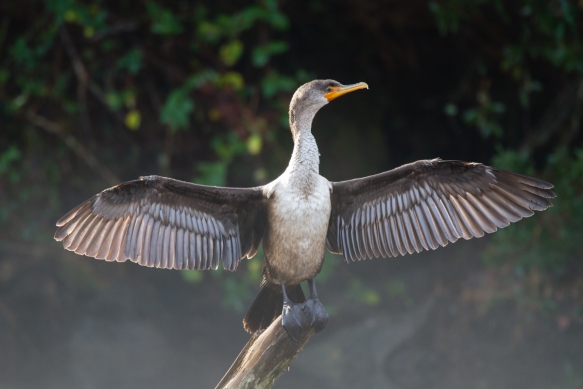 Along the canals on Wildlife Drive is always a good place to find water birds of various sorts. That morning had a crowd of Double-crested Cormorants perched on a fallen tree in the canal. Cormorants are relatively primitive birds, and, unlike most other waterfowl, their feathers are not water repellant. This necessitates their spread-wing poses throughout the day as they must dry their feathers after repeated dives in the water while searching for fish. The light-colored breast and neck indicate this is a first-year bird (adults have dark plumage throughout).

With some remnant patches of fog drifting along the canal, the short video below shows a “mistical” scene and allows you to hear a few of their grunts as they maneuver for position on the branches.

A herd of turtles

The foggy morning was warm enough for turtles to be out in force. For a reason known only to those with shells, one small island of grass in a canal seemed particularly appealing to a group of what appear to be Yellow-bellied Sliders. They had climbed over one another in a jumble, perhaps in hopes of being closer to the emerging sunlight. 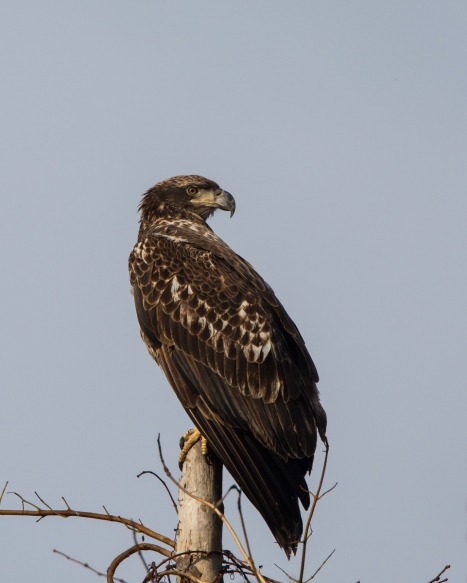 Lake Mattamuskeet is one of the best places in NC to view Bald Eagles, especially in winter, when the large concentrations of waterfowl provide a reliable food source. Bald Eagles are particularly fond of American Coot, which tend to occur in higher numbers on the lake a little later in the winter. This immature (it usually takes 4 or 5 years for a Bald Eagle to acquire its fully white head and tail feathers) was very cooperative as it scanned the marshes from a high perch. 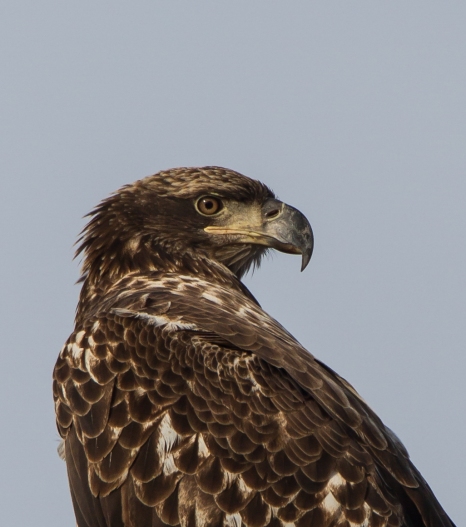 I always marvel at the size of their beak and the intensity seen in their eyes. Based on what I have read online (a nice photographic summary of aging Bald Eagles is at http://www.featheredphotography.com/blog/2013/01/27/a-guide-to-aging-bald-eagles/), I am guessing this is a first year bird, due to the dark iris and fairly dark beak. 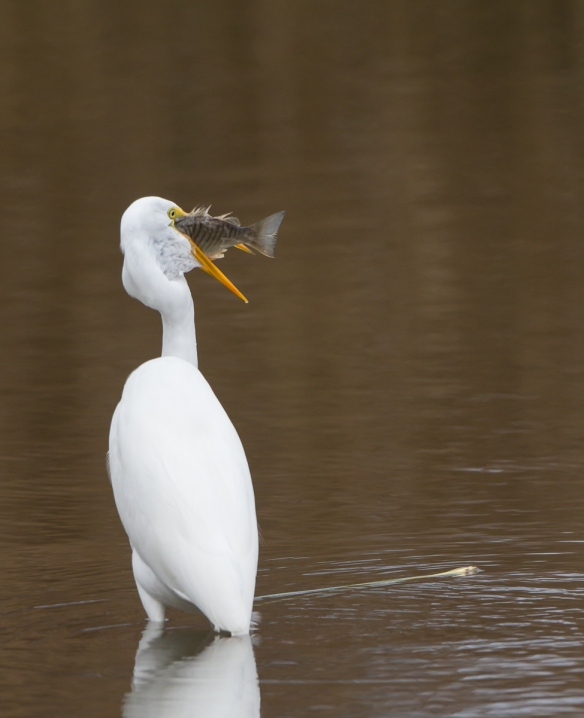 As I drove out Wildlife Drive on my way over to Pocosin Lakes, I saw something I had always wanted to photograph. Great Egrets on this refuge generally eat small fish which are abundant in the shallow waters. But here was one with a beak full of fins! And it apparently did not want to risk losing its meal, as it started to walk away as soon as I slowed down for a look. 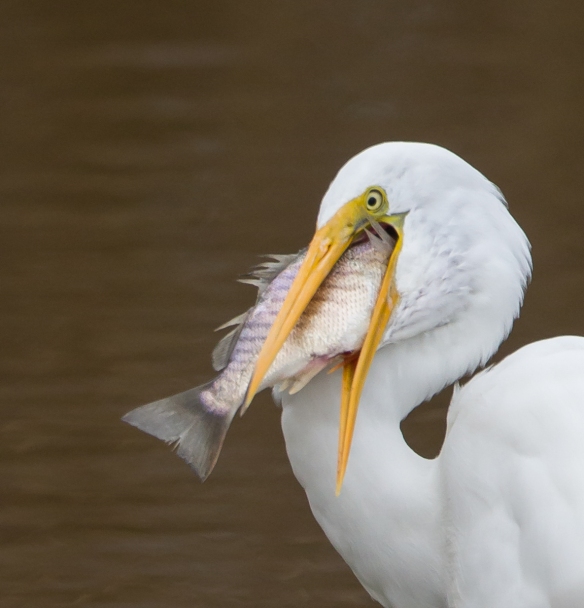 I am not quite sure what species of fish this is, although it resembles a Spot…if you know, please comment on the blog. Luckily, the egret paused long enough for a few quick images before getting behind some brush on the shore of the canal. Although partially hidden, I could see the fish did finally get swallowed, appearing as a large, squirming lump as it passed down the long neck of the bird. Made my PB&J seem easy.

Tomorrow, I’ll post how my day ended when I made my way to Pocosin Lakes for the rest of the afternoon.

NOTE: I am offering weekend trips on the first and second weekend of January and another trip (exact date to be determined) in February. We will visit both Mattamuskeet and Pocosin Lakes National Wildlife Refuges. Contact me at roadsendnaturalist@gmail.com for details if interested.