Question: What is the white stuff in bird poop?

Answer: That is bird poop, too.

This is an update to an image I posted a week or so ago about new beginnings in the yard this spring. I found and photographed an egg of an Eastern Tiger Swallowtail on a Tulip Poplar leaf (their most common host plant in our woods)…

I was surprised how long it took for the egg to hatch, but hatch it did on April 28. It turned dark a day or two before hatching. I went out this morning to check on the larva and it has spun a tiny silk pad on top of the leaf where it stays put much of the day. You can see from the picture that it crawled off an inch or so to feed. 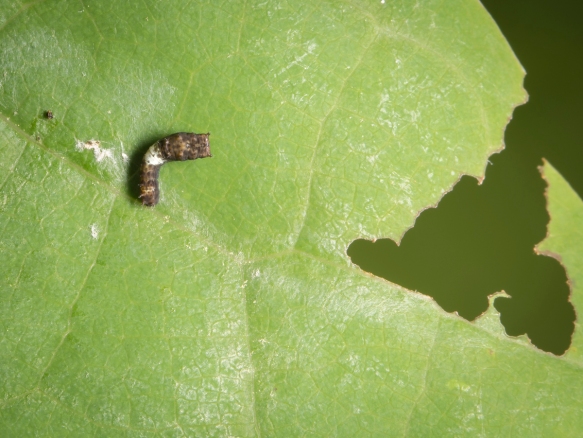 The larva is currently about the size of a pencil point and has the characteristic black and white markings of early instar swallowtail caterpillars. This is believed to be a bird poop mimic coloration. By sitting still most of the day, they really do look like a little bird turd (and what self-respecting bird would want to eat that?).

Over the next couple of weeks, if all goes well, the caterpillar will dine at the Tulip Tree Cafe, molt a few times, and grow up to be a snake mimic larva with small fake eye spots.

Nature is full of deception. And now it is being touted by none other than the New York Times.  A recent article on caterpillar defenses caught my eye. Researchers studied the late stage larvae of the Canadian Swallowtail (Papilio canadensis). The larvae are plump, green caterpillars with distinctive eye spots that are said to make them snake mimics. This type of mimicry is fairly common in the caterpillar world and is thought to provide some protection from avian predators. When I looked at the photos in the article, they looked very similar to something I found in the yard a couple of weeks ago. 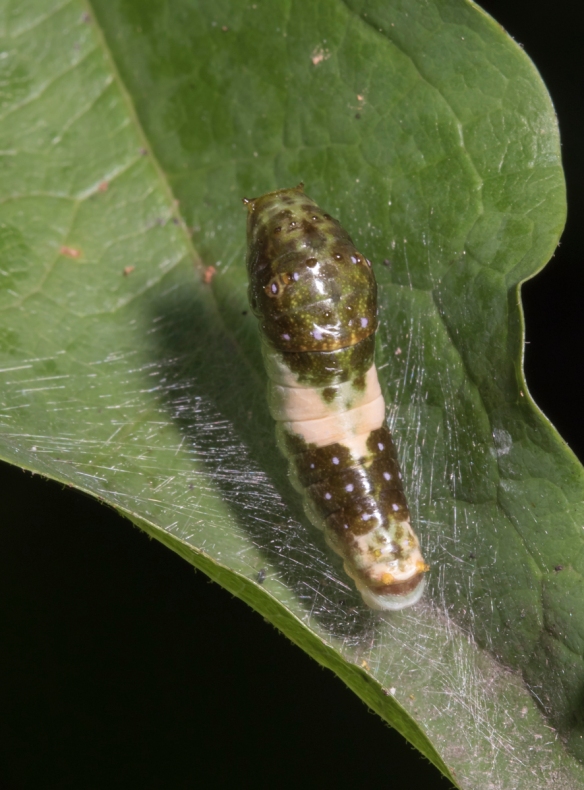 I posted a photo of the third instar larva of an Eastern Tiger Swallowtail (Papilio glaucus) in an earlier post. Like the early instar larvae of many species of swallowtails, it is said to resemble a bird dropping. These so-called bird poop mimics usually have a dark base color and at least one conspicuous white splotch on their body (usually near the center). But, the last two instars of this species look very different.

I checked on the swallowtail caterpillar in my yard a week after that first photo and it looked almost exactly like the snake mimic photo of the Canadian Swallowtail larva. Gone was the bird dropping costume and in its place was a light green body with fairly prominent fake eye spots, and a slightly swollen anterior portion, giving it the appearance of a snake’s head.

The larva rears up in a “snake strike pose” when disturbed

When the caterpillar is disturbed (I blew on it and touched the leaf for the photo above), it arches its body making the eye spots become more visible and enlarging the “snake head” region. In the recent study reported in The New York Times, researchers studied the predator deterrent efficacy of this snake look-alike strategy by creating tasty plain green “pastry caterpillars”. When placed on twigs, birds readily ate them. They then added eye spots and snake-like heads, and the birds tended to avoid them. In fact, adding just eye spots caused about the same rate of avoidance. This caused them to wonder….If real caterpillars don’t gain extra protection from extra deception, then how could their disguise have evolved?

They decided to present their pastry larvae to day-old bird chicks who had never seen a snake, theorizing that birds may have an innate fear of snakes and snake-like objects. Here are the results…When the chicks were offered simple green cylinders, they grabbed them. But when eye spots were added, the chicks became wary. Consistent with earlier research, the scientists found that adding a snakelike head didn’t make the chicks any more fearful. Over the next two days, the scientists presented the chicks with pastry caterpillars five more times. By the end, the chicks had learned that cylinders with eye spots were, in fact, tasty snacks. That was not the case when the chicks were presented with pastry caterpillars with both eye spots and snakelike heads. Even at the end of the study, the chicks were still fairly wary of the more realistic mimics. They concluded that birds have evolved a fear of snakes and that just a few characteristics, like eye spots, can make them wary. But, birds and other animals, can learn to distinguish between similar-looking objects, which may have driven caterpillars to evolve more elaborate disguises in order to keep fooling the birds.

After more provocation, the caterpillar extrudes its osmeterium, which happens to resemble a snake’s tongue

And, if you are going to have a snake’s head, you may as well have a snake’s tongue. Turns out, all members of the family Papilionidae have a special glandular organ, called the osmeterium, that can be extruded from just behind their head capsule when they are threatened. The forked shape resembles the forked tongue of a snake, further reinforcing this disguise to any would-be bird doubters. The osmeterium also produces secretions with a distinctive and disagreeable odor. These secretions have been shown to repel many invertebrate predators such as ants and mantids, but are not believed as effective against most vertebrate predators.

So, it seems this group of caterpillars are quite adept at the art of deception. From bird poop to strike poses, they offer an array of distasteful, or possibly even dangerous-looking, meal options for foraging birds. I am always fascinated by this long, slow dance of predator and prey and how it plays out in terms of behavior and appearance.