Nature taking its course – hunter and prey, the endless circle of life and death.

Melissa found some cool caterpillars on a Viburnum this weekend while we were walking in a city park in Richmond.

I walked over to take a look and saw a beautiful hummingbird clearwing larva, Hemaris thysbe, in the classic defensive pose of most sphinx moth caterpillars – front of body reared up, head tucked in, body aligned along the twig or mid-vein of a leaf. Suddenly, a huge European hornet, Vespa crabro, appeared and went straight for another caterpillar on the shrub, another hummingbird clearwing. 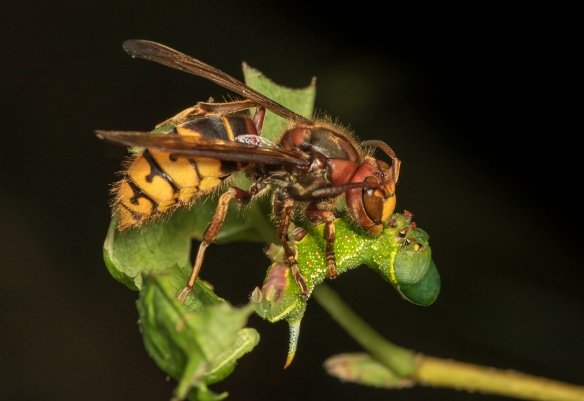 I managed two quick pictures, and the hornet flew off, carrying its prize back to its nest, where the defeated caterpillar was sure to be chewed up and fed to some hungry wasp larvae. We just stood there, amazed at what we had witnessed. When I looked at the image the next day, I noticed there was another, smaller caterpillar on the same leaf (look just to the left of the clearwing’s “horn” and you can see another small, green caterpillar).

European hornets first appeared in the United States in the mid-1800’s and have since spread throughout most of the East. They look like a very large (up to 1.5 inches) yellow jacket, but are more brownish yellow in overall appearance. We didn’t have time to stick around, but I would not be surprised if that same hornet didn’t come back and search that shrub again, perhaps finding one or more other victims to carry back to the nest. Amazing how a scene in nature can change in an instant.