A river is the most human and companionable of all inanimate things. It has a life, a character, a voice of its own, and is as full of good fellowship as a sugar maple is of sap. It can talk in various tones, loud or low, and of many subjects grave and gay…For real company and friendship, there is nothing outside of the animal kingdom that is comparable to a river.

Scene along the lower Roanoke River (click photos to enlarge)

After spending some time camping and hiking in the mountains, it seemed appropriate to have a totally different type of experience by paddling a few days on one of my favorite rivers, the Roanoke. The Roanoke is a mighty river, meandering over 400 miles from the mountains of southwest Virginia to Albemarle Sound in North Carolina. In places, the flood plain is immense and provides habitat for countless animals and plants, and solace for any who paddle though it. The Nature Conservancy has helped protect over 90,000 acres along the Roanoke and calls this area the largest and least disturbed bottomland hardwood forest ecosystem on the East Coast.

Tent on the camping platform at Three Sisters

One of the things that makes this river so special for paddlers is its series of camping platforms. Roanoke River Partners coordinates a reservation system on over 20 camping platforms along the lower Roanoke and its tributaries. On this trip, we were going to paddle about 28 miles over three days, staying at two platforms – Three Sisters on Broad Creek on the Roanoke, and Otter One, on a different Broad Creek off the Cashie River.

A trip like this would normally require a couple of cars, one at the starting point and one at the take out. But, we decided to opt for a local outfitter, Roanoke Outdoor Adventures, run by Captain Heber Coltrain. Heber is a local guide that rents canoes and kayaks, can help you plan a trip through the area, and provide shuttle service. He is knowledgeable about the region and its history and I can recommend his services to anyone planning a trip in this region. 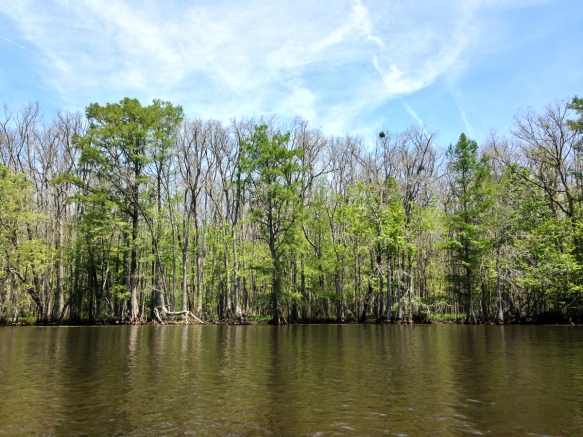 Putting in at the NC Wildlife boat ramp near Jamesville, one of the first things you notice is a lack of leaves on many of the trees along the shoreline. At first glance, it looks as though the Tupelo Gum just haven’t leafed out yet this spring. A closer look shows they have, but the leaves have all been consumed, almost every leaf gone!

The culprit? A huge outbreak of Forest Tent Caterpillars Malacosoma disstria. Unlike the more familiar Easter Tent Caterpillars, these munchers do not build the communal silk shelter we commonly see in the forks of certain tree branches in early spring. Instead, they create a silk pad on the branches or trunk of a tree and congregate on it when at rest or molting. Early stages are almost all black with conspicuous hairs. As they mature, they acquire blue sides and footprint-shaped white marks on a dark background along their dorsal surface. Their primary host along the Roanoke seems to be Tupelo Gum, although we saw other species, such as Sweet Gum, that had been stripped. These outbreaks can occur over many years (this is at least the second year for this area) and must have a huge impact on tree growth and survival as well as impacts all along the food chain. Tree flower and nectar production are almost nil and the resulting lack of fruit can impact many mammals and birds. 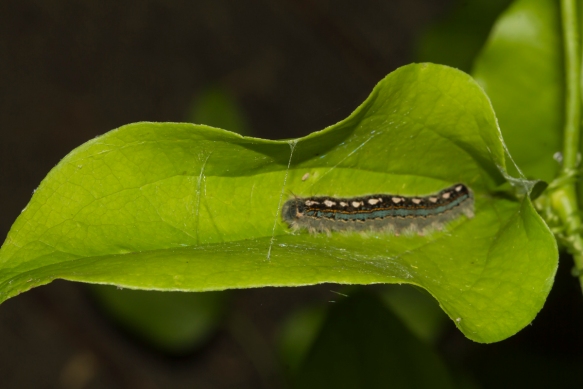 There is one generation per year and we were there as the caterpillars were starting to pupate. They fold a leaf by stringing silk across the edges. The silk strands contract as they dry, pulling the leaf sides together. 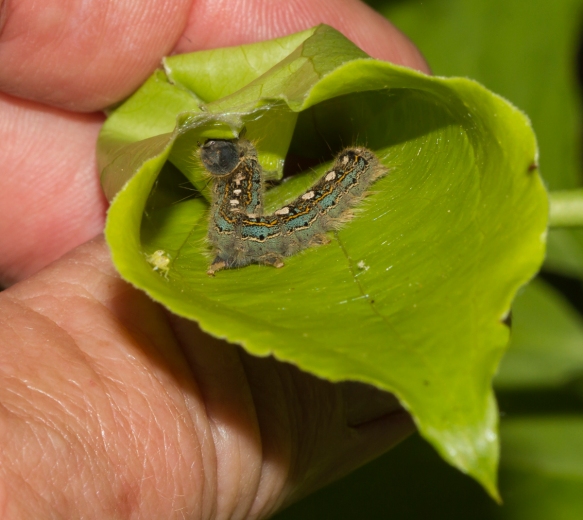 One night’s work by a caterpillar

Overnight, we saw one leaf shelter almost completed in a Smilax vine along the platform. Once the shelter is complete, the caterpillar pupates inside. Adult moths emerge in a couple of weeks and lay eggs in the tree canopy. The eggs hatch next spring as the tree leaves begin to unfurl. There are some species that probably benefit from this seemingly endless abundance of larval lunch meat – most notably various parasites and predators. Yellow-billed Cuckoos are caterpillar specialists, and probably have good years during the outbreaks, and we saw and heard plenty. We also saw several of the ubiquitous swamp canaries, the Prothonotary Warblers, beating the two-inch larvae on tree limbs before gulping them down.

As we unloaded our gear the first afternoon, a bright yellow male serenaded us in his attempt to lure a lady to a nest cavity he was actively preparing.

As he sang, he gathered dry moss from a nearby log. With a beak full of moss, he flew up to a hollow snag, and stuffed the moss into the future bedroom and nursery. In between, he frequently battled another male from across the creek, defending what he hoped would be an attractive spot for a future mate. His is a busy life in the swamp.

Ours was a relaxed life. We swam frequently to cool off, and enjoyed the peace and quiet as we paddled toward our take-out miles away. We crossed through to the Cashie River at one point and paddled thorough part of the vast Roanoke River National Wildlife Refuge. All along our journey were sights and sounds that make me want to return to what was originally called the River of Death, for its frequent huge floods. But, to me, the vast wilderness along this stretch of river, and the large acreage under protection by various public land agencies and conservation groups, makes this a River of Life. Time spent paddling on the Roanoke is truly a retreat from a bustling modern world, and a means to glimpse the beauty and mystery of the many secrets of a swamp. 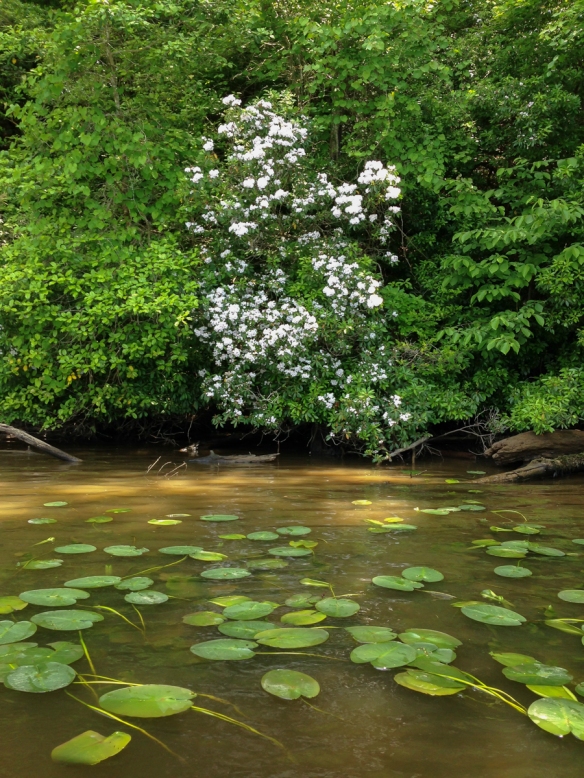 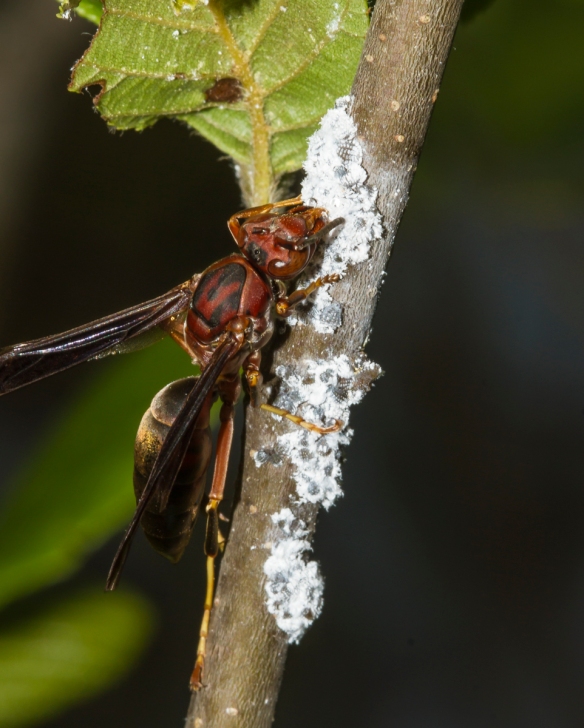 View of the swamp from one of the camping platforms 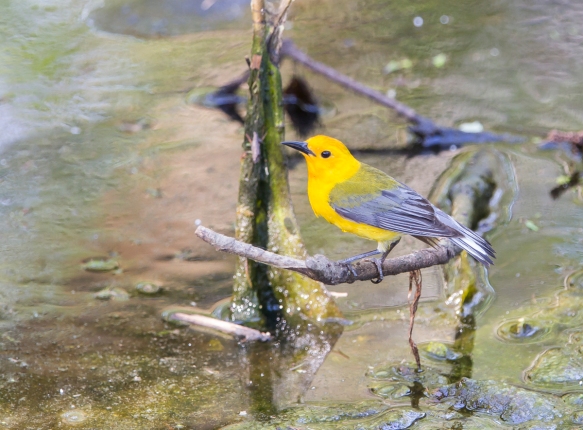 Male Prothonotary Warbler in threat display to another male 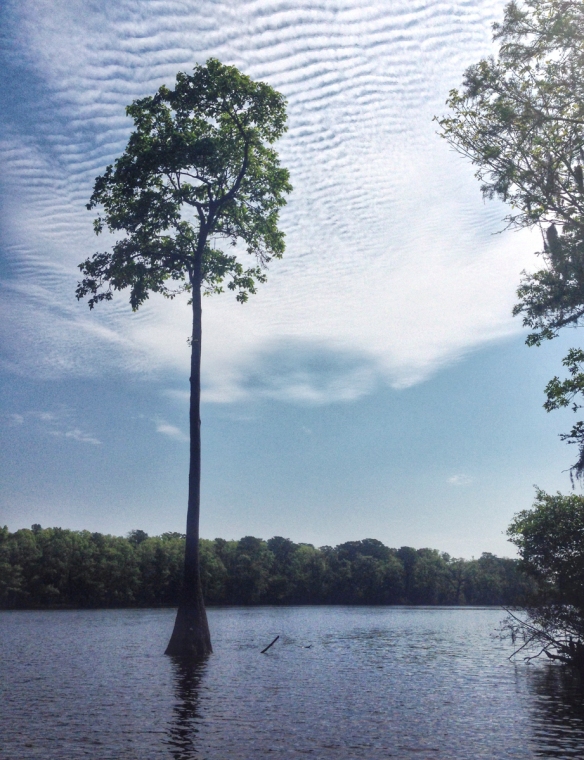