The abundance of insects feeding on pollen and nectar in the goldenrod patch out on the power line has naturally attracted an array of predators.

One of the more formidable-looking of these is the Wheel Bug, Arilus cristatus, our largest member of the so-called Assassin Bug group. Wheel Bugs are named for the unusual gear-like projection on the dorsal surface of the thorax of the adult insects. They are efficient predators of many types of insects including caterpillars, beetles, and bees. Wheel Bugs move slowly through vegetation like goldenrod searching for prey which they grab with their long front legs and then pierce with their stout beak. Their saliva contains a toxin that immobilizes and kills its victims within a minute or less. They then drain the body fluids from the victim. That same beak can inflict a painful bite on a human if you accidentally grab a Wheel Bug, but, left to their own, they will not bother us. In fact, Wheel Bugs are considered beneficial garden insects as they prey on a number of bugs we consider pests. 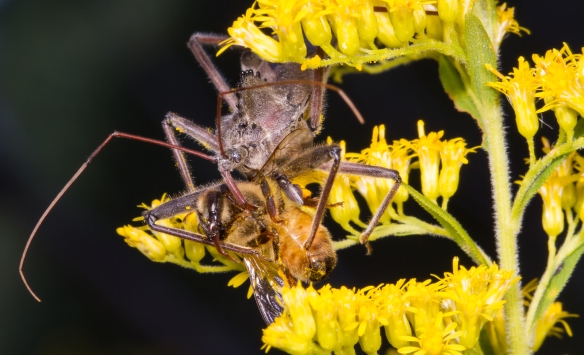 I encountered a couple of these impressive insects while walking through the goldenrod last week. One was hunting on some flowers, the other had successfully captured a Honeybee. I grabbed a few quick photos and moved on. When I looked at the images later I noticed something I had missed in the field.

There was a tiny fly on the bee near the point where the Wheel Bug was feeding. I recognized it as one of an interesting group of flies known as Freeloader Flies. These tiny marauders are kleptoparasites and steal a meal from the jaws of predators such as Assassin Bugs and various spiders. I had seen them once before in the garden when I photographed a Black and Yellow Argiope Spider feeding on a Stink Bug. 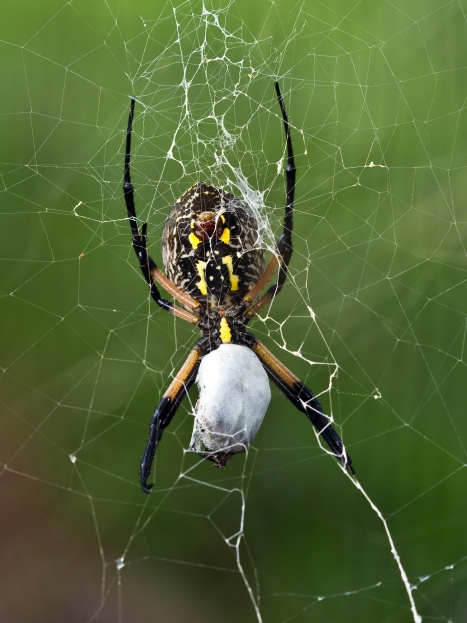 Black and Yellow Argiope with prey

On that day, I once again did not see the tiny flies until I had taken a few images. At that time I had no idea what these miniature thieves were and was not even sure what they were doing other than living dangerously. A web search helped me discover the amazing world of kleptoparasitic flies. 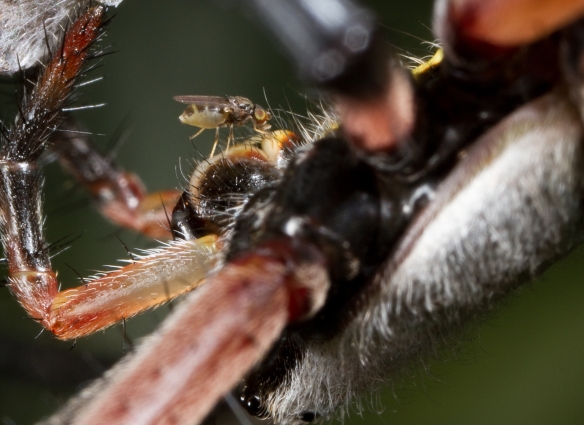 Other names for this interesting group of insects include Jackal Flies and Filth Flies (their larvae feed on decaying organic matter and some species may develop in manure). They apparently are attracted to their meal by chemical odors released by the victims. And it is unclear whether they are merely licking spilled fluids from the victim or whether they may actually penetrate the cuticle of the prey and ingest tissues that the predator has liquified by its injections into the dead prey. The adults of some species of Freeloader Flies have been observed to follow a particular predator in order to partake of its meals. I guess in this case, it is a different sort of meals on wheels:)