What is the earliest sign of spring? The motion of worms and insects? The flow of sap in trees and the swelling of buds? Or are there earlier signs in the water? – the tortoises, frogs…

I think the sounds of the coming spring are amongst the first things I notice. The bird songs, the whir of insect wings, the busy rustling of leaves as squirrels begin making their spring nests. Even the breeze sounds different on a warm, late winter day. But one of the surest signs of the warmth to come are the calls of our early amphibians. Here in the forests of the Piedmont of North Carolina, that role is usually handled by Spring Peepers and Upland Chorus Frogs. I started hearing the chorus frogs a few weeks ago, before the last snow and deep freeze. They took a break while their world turned white, but now they are back on duty, proclaiming a change is in the air. I have spent some time over the past several years trying to photograph various species of frogs and toads as they fill the air with their distinctive mating calls. I have had some good success, but one species has managed to elude me – the Upland Chorus Frog, Pseudacris feriarum. I find it both difficult to approach and difficult to observe when calling. They tend to call from shallow water in vegetated pools, often hiding amongst the vegetation as they sing. At my approach, they invariably fall silent, requiring a quiet sit and wait strategy on my part before they call again, if at all. So, I was determined to try again this week after hearing a fair number of them calling in several woodland pools while on my walk this past Sunday. Using binoculars, I watched a few calling at a distance of 30 or more feet in one large pool. I also found several of their small egg clusters attached to some twigs and grasses in the water. 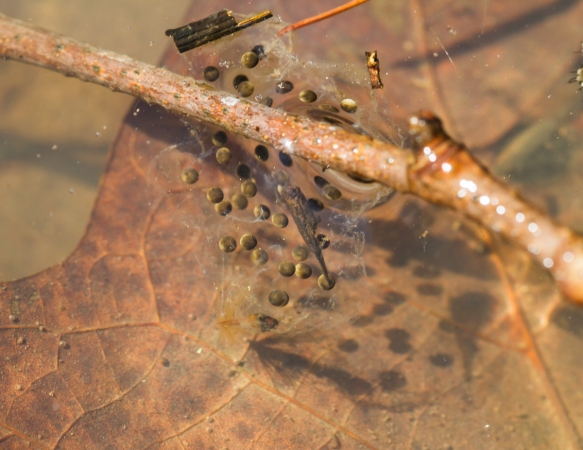 I even saw a pair in amplexus, that amphibian embrace where the male clasps the female from above and fertilizes the eggs externally as she releases them. But, the calling frogs were either too hidden in thick vegetation or too far out in the pool for a good photograph. Walking down through the floodplain I soon heard another loud chorus coming from behind a ridge line that angled toward the stream. As I climbed over the top for a look, I saw a small pool that contained a dozen or more calling frogs. 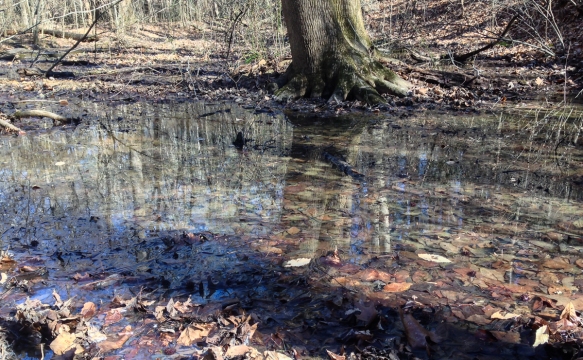 I sat and watched and decided this pool had potential – there was a large tree on one edge that wold provide a bit of cover. The pool was small and the sun would be coming over my shoulder late in the day, so the chances for good photographs seemed likely. Even though the frogs had started calling again shortly after I initially walked up, I was a bit concerned that when sitting against the tree trunk, I might be too close, and that might really spook them. So, the next afternoon I brought my Kwik Camo blind (http://www.outdoorphotogear.com/store/kwik-camo-photography-blind.html). I thought it would allow me to better blend in, so the frogs might start calling again even after I brazenly walked into their concert hall. The blind fits nicely in a belt pouch and is lightweight, so it is easy to strap on and carry for long hikes. Plus, it drapes over my camera, tripod, and my human form, and turns me into an amorphous bush that hopefully looks less threatening than a person armed with photography gear.

As suspected, my approach and settling in quickly silenced the almost deafening chorus, so I got situated under the blind, leaned against the tree trunk, and waited. And then waited some more. About thirty minutes went by without a sound except for leaves blowing in the wind. And I could still only see one frog in the pool, and even that one was low in the water and partially hidden by a stick. I decided to try to coax a reaction by using my phone to search the web and play a recorded call. I used the Amphibians and Reptiles of North Carolina web site created by Davidson College at http://www.herpsofnc.org/. I played the call twice. No response. I looked through my viewfinder at the one visible frog and played the call again. This time, that frog raised up so that the top half of its body was out of the water. I suppose he was trying to figure out where this caller was hiding. But he did not answer. 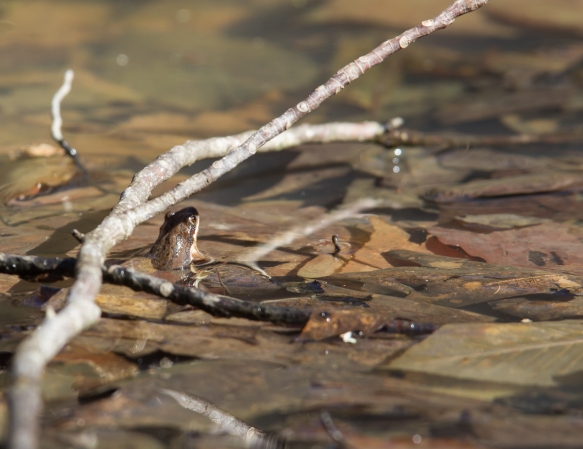 So, I waited some more. Another 15 minutes went by and I was beginning to wonder if I had simply tried to get too close and they were having nothing of it. Then a sound – a partial call. The call of the Upland Chorus Frog sounds something like the noise made by running your fingers over the teeth of a comb – a regularly repeated “crrreek”. This was just one crrreek. But that was enough to stimulate another, then another, and soon the pool sounded like a bunch of busy fingers in a comb factory. Ten or more heads suddenly appeared from the pool and started calling, with the tell-tale enlargement of their vocal pouch keeping time with their crrreeks. The first few callers were partially hidden, either barely out of the water or using some nearby object as cover. 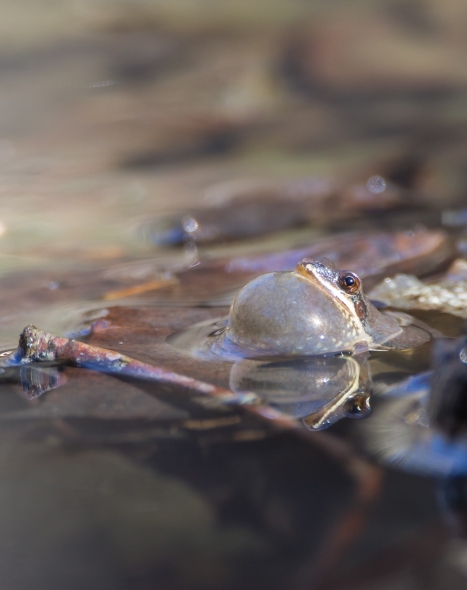 Upland Chorus Frog calling while barely out of the water

Upland Chorus Frog calling with a leaf shelter behind it

But, in less than a minute, it was a frog calling cacophony. 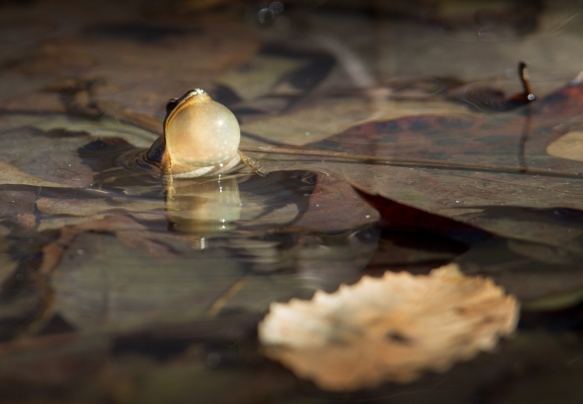 Here is a short video so that you can share in the amazing sights and sounds of this anuran symphony.