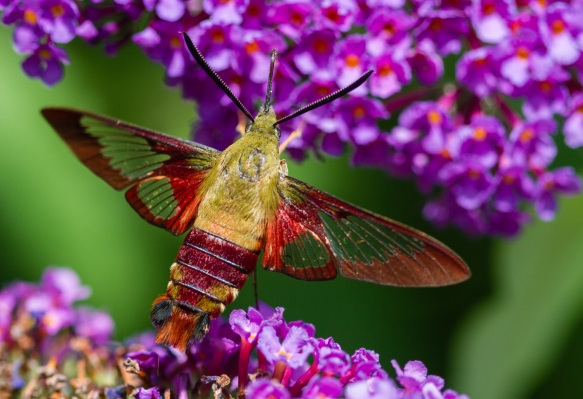 During my career at the NC Museum of Natural Sciences I once was forwarded a call from someone that was curious about something they had seen in their yard. She wanted to know what species of tiny hummingbirds were visiting her flowers. After a brief discussion, we came to the conclusion she was seeing one of a group of day-flying moths collectively known as Clearwing Moths, and based on her description of the colors, most likely the aptly named Hummingbird Clearwing. 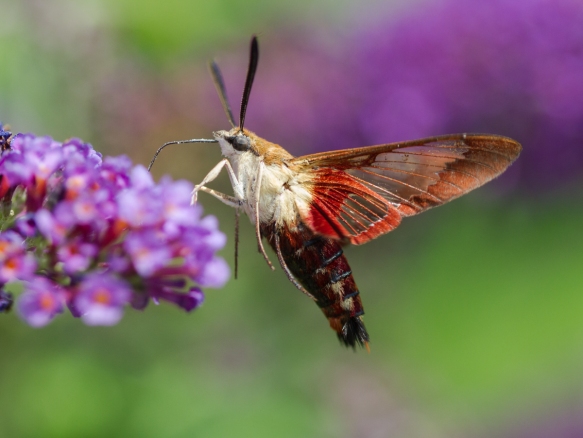 This common eastern species, Hemaris thysbe, has coloration and foraging behavior reminiscent of a Ruby-throated Hummingbird, but is much smaller. A Hummingbird Clearwing Moth has a wingspan of about 1.5 – 2 inches, whereas the bird, the Ruby-throated Hummingbird, has a wingspan of 4.5 inches. Yet it is easy to see how people could mistake these diminutive rapid fliers for the bird. They hover and flit from flower to flower sipping nectar with their long proboscis. Their wings have reddish borders and they often have a greenish hue to the “hairs” on their stout bodies. These photographs of the adult moths were taken last week while visiting my parent’s in southwest Virginia. They have several Butterfly Bushes (Buddleia sp.) which are magnets for these beautiful moths.

One thing you notice when you watch one of these moths is the blur of their wings as they hover and feed. Try as I might, I could only occasionally get part of both wings in focus even at high shutter speeds. No wonder, as it is estimated they beat their wings 30-35 times per second (compare that to a Ruby-throated Hummingbird with an average of 50-60 beats per second). One thing the rapid burst of photos did reveal is the pattern of movement in the wings – the figure-8 motion (the photo above shows the start of the backward sweep of the figure 8), which provides lift in both directions.

I also noticed several individuals of the similar-looking Snowberry Clearwing (Hemaris diffinis) feeding on the Butterfly Bushes. They closely mimic bumblebees in coloration and are often called Bumblebee Moths. In one online discussion forum I even saw someone refer to these as looking half hummingbird, half bumblebee – a bumblebird! The main differences between them and the Hummingbird Clearwing is that this species tends to be slightly smaller and has a blackish abdomen with a yellow band (sometimes not complete) near the tip. 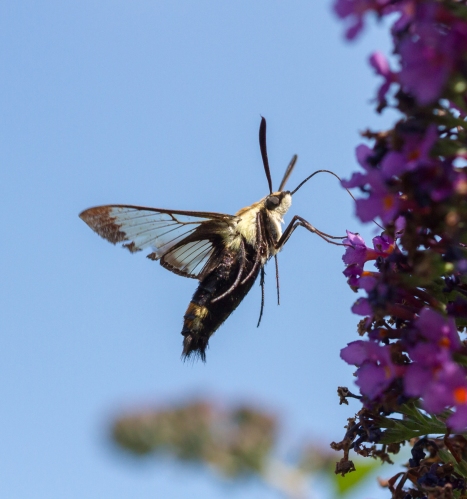 Both species have a long proboscis they insert into flowers to obtain nectar. They often place their front pair of legs on the flower as they hover and feed. 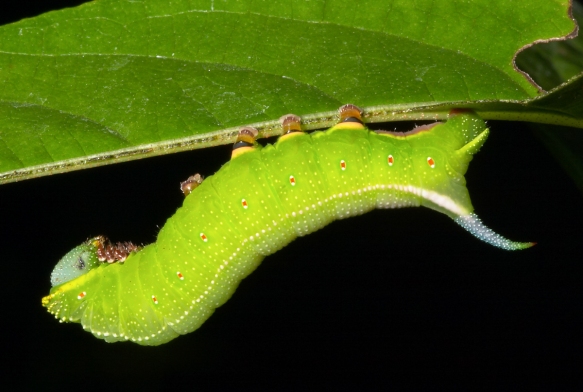 Both Hummingbird and Snowberry Clearwings are members of the hawk moth or sphinx moth family, Sphingidae. They are among the few strictly diurnal (day-flying) members of that family and are found throughout most of the eastern United States and Canada. Their caterpillars are similar to many other sphinx moth larvae in that they have a distinctive curved horn on their posterior end (caterpillars of this family are often called hornworms). The Hummingbird Clearwing’s horn is often bluish and they have a row of orange and white spots along each side surrounding the breathing pores (spiracles). 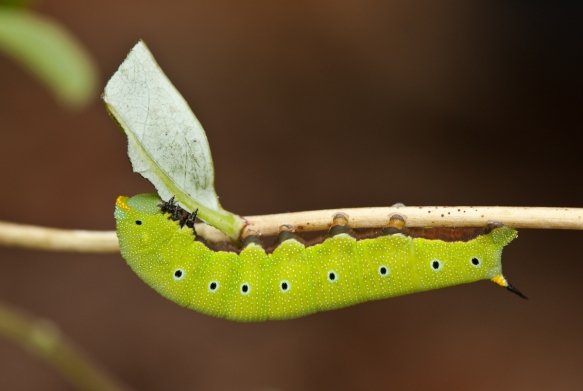 Snowberry Clearwing larvae have blackened dots along their spiracles and a horn that is yellow at the base with a black tip. Both species use various species of Haw (Viburnum sp.) and Honeysuckle (Lonicera sp.) as host plants. I always look for them on Arrowwood Viburnum and Coral Honeysuckle in my area. 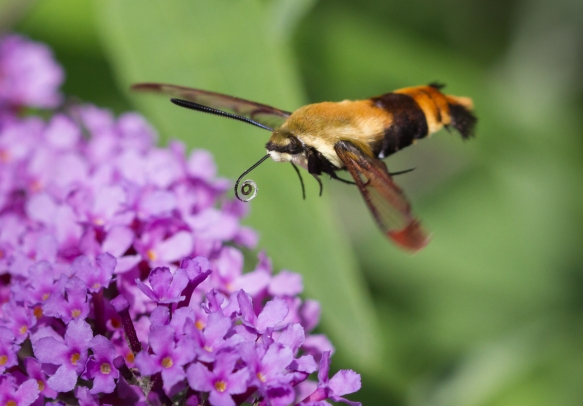 Snowberry Clearwing cruising in toward a meal showing curled proboscis

If you have either of these host plants in your garden or woods, be on the lookout for the adults as they cruise and hover at your flowers in search of nectar. I see them at a wide variety of plants from non-natives like Butterfly Bush to native beauties such as Bee Balm and Phlox. Every time I see one I can’t help but pause and enjoy…and sometimes I even stalk them for an hour or more trying to get just the right photo, but I always want a better one…