Some of these resemblances are perfectly staggering – to me they are a source of constant wonder and thrilling delight.

In one of my nightly checks of the visitors at my screens, a small wasp-like creature caught my eye. But a closer look revealed some interesting details.

The patterns and colors looked wasp-like, but the wings, lack of a constricted waist, feathery edges to the back of the wings, and the odd tip of the abdomen certainly did not. I decided it must be some sort of moth that was a mimic of a stinging insect. This type of mimicry, known as Batesian Mimicry, is named after English naturalist, Henry Walter Bates. It is quite common in various insect groups with various types of flies, moths, and some beetles being the leaders in the field around here of wasp and bee look-a-likes.

Many predators that attack bees or wasps suffer painful stings. This is why many have learned to avoid insects with clear wings and yellow and black bands around their bodies. By mimicking stinging insects, the clearwing moths are able to avoid many predators and thus fly even during daylight hours. But, they are also attracted to lights, as was my visitor.

Female moths lay their eggs in wounds on trees. Most of the larvae of this family of clearwings are borers in the limbs, trunks, bark, or roots of trees, shrubs, herbs and vines. The Dogwood Borer Moth’s larvae tunnel beneath the bark of a wide variety of deciduous trees such as beech, hickory, elm, dogwood, apple, and pecan. The galleries made by feeding larvae can cause a lot of damage to the host tree, plus it may give access to other potentially harmful species such as certain fungi. 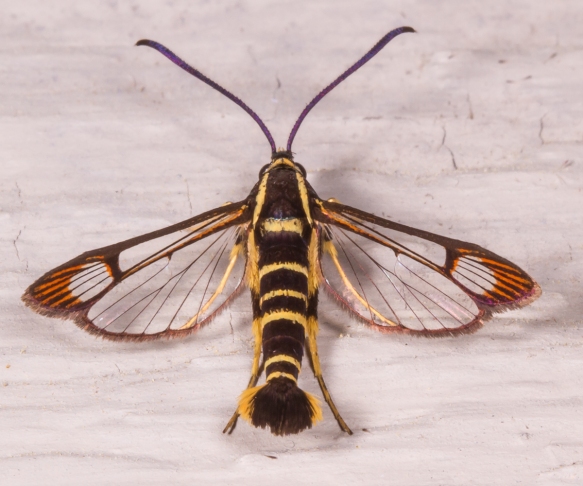 One reference stated that this group of moths take their deception one step further in that some species have legs with conspicuous tufts of hairs that are tipped with yellow scales. These resemble the pollen baskets on the hind legs of honeybees. He also commented on not knowing the deception value of the prominent tufts of feathery scales at the tip of the abdomen. I was unable to find anything that gave a clear function for these so-called anal tufts, although I wonder if it has something to do with pheromone distribution since they tend to be slightly different shapes in male and females. But, in spite of the tufts, the overall impression of this beautiful mimic is one of leave me alone or else, so, mission accomplished.