It’s summer and time for wandering…

After I retired (you remember back when I was retired) I loved the fact that I could go to some of my favorite places on a week day when fewer people would be out and about in the wild places I love. I certainly didn’t want to go on a holiday weekend when even more people created crowded campgrounds and busy highways en route to my favorite destinations. Well, that was then and this is now, so off we went last weekend on a camping excursion. It was prompted, in part, by a visit from Melissa’s cousin, Kevin, from New York. He had not traveled much in these parts so she had given him tips on where to camp and hike in the mountains on the first part of his visit and now we were going to share a couple of our favorite things with him down east – paddling in a swamp and looking for bears.

The first day we drove to Pettigrew State Park where we had reserved a site, set up camp, and then headed to the nearby boat launch on the Scuppernong River just outside Creswell. We had debated whether to try the entire 12 miles to Columbia (something we both have always wanted to do) but we decided to go ahead, despite the threat of thunderstorms.

Upper reaches of the Scuppernong River (click photos to enlarge)

We put in about 1:30 p.m. and headed toward Columbia (we shuttled one car down there at the take out point). Melissa and I have paddled portions of this river several times and have seen a bear each time, so we had high hopes. No sightings this trip, but we think we heard a couple splashing through the swamp as we paddled. We also saw many pileated woodpeckers, wood ducks, a barred owl, a bald eagle, and had a constant escort of dragonflies. 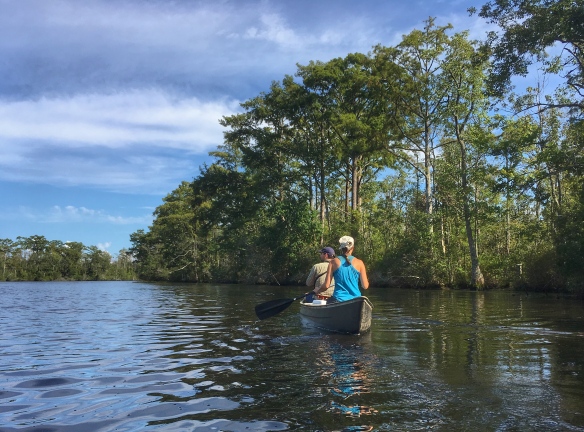 Paddling the tranquil Scuppernong. We saw lots of pileated woodpeckers and heard a couple of bears splashing in the swamp. 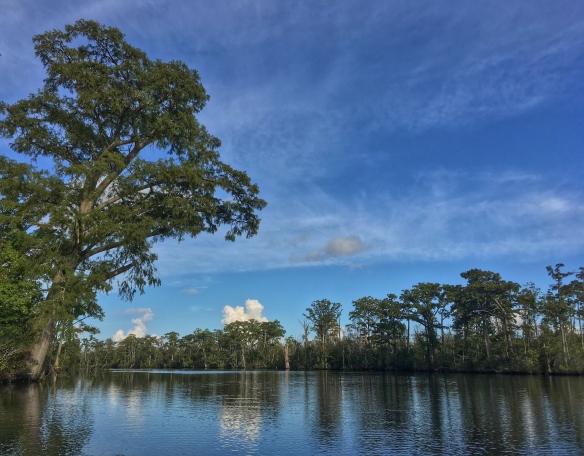 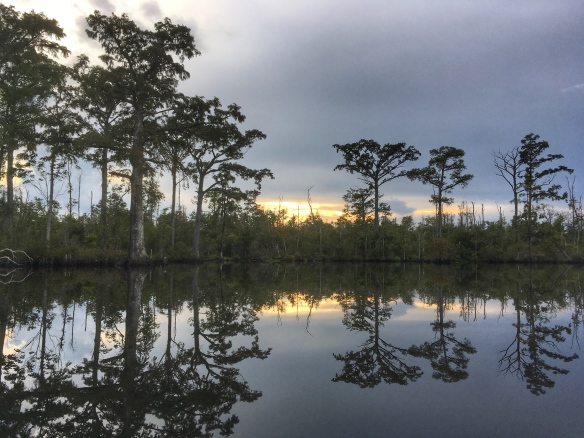 A tranquil ending to a beautiful day on the river

We managed to dodge the thunderstorms and ended the day with a slick-as-glass water surface at sunset.  After a delicious dinner in Columbia we headed back to camp where another storm stopped just short of the campground. The next morning we headed over to the Pungo Unit hoping to show Kevin a few bears and other critters in our favorite area of the state.

Our first wildlife of the day – a young Eastern box turtle

We started kind of slow but did see 5 bears by mid-day. My favorite was one sacked out in a tree right next to the road.

This is one sleepy bear

We took a break from Pungo and drove over to Mattamuskeet National Wildlife Refuge. After observing some waders (including a nice little blue heron and a tri-colored heron), a tour of the visitor center, and a short hike along one of the boardwalks, we headed back to Pungo. Kevin was driving to Richmond that evening so we wanted to try to find as many bears as possible and maybe have a few opportunities for photos before he headed out. Pungo did not disappoint…

We saw a couple more as we drove the refuge roads and then decided to head to one of my favorite places, “Bear Road”. It wasn’t long before we saw the first of 14 bears! The sow above had two cubs of the year hanging out with her (only one is visible in the pic above), and we saw several other individuals and another sow with cubs. But one bear provided the highlight of the day…

The moment when you realize – wait, what are those things?

A young, beautiful bear (probably a 2 or 3-year old) came out of the woods and headed down the road towards its evening meal of corn. We were sitting in the road near the corn field and the bear strolled along until, suddenly, it realized something was amiss. It did what we all have probably done at one time or another…trying to decide which course of action is the best…go back, continue on to where I was headed, but what about…then a hesitation, a look back and forth, and finally, what the heck, I’m going. So, the bear scurried into the canal and over into the corn and disappeared. 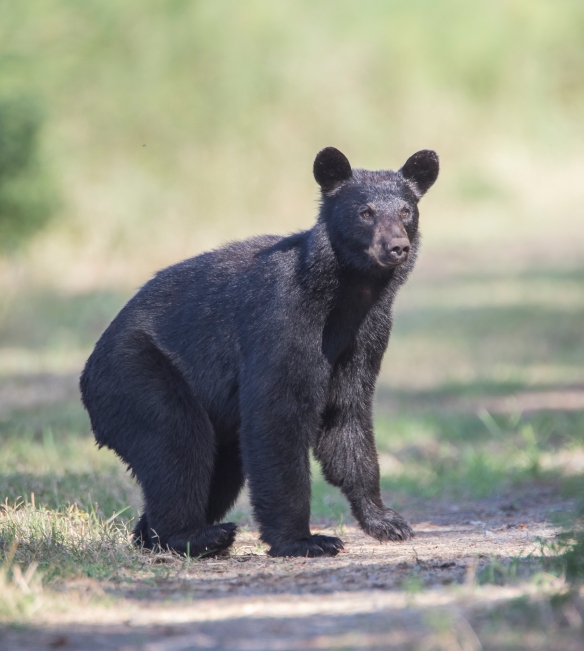 But the corn is just over there…

We ended the day with 25 bears, including a few with cubs of the year (always fun to observe), a couple of bears standing up to check their surroundings, and a bear in a tree. It turns out, if you pick your destination carefully, you can still go somewhere even on a holiday, and not experience the hassle of crowds (unless you count the bears). A great outing on a hot holiday weekend. Can’t wait for our next visit.