Skip to primary content
Skip to secondary content
Could a greater miracle take place than for us to look through each other’s eyes for an instant?
~Henry David Thoreau
On any woodland walk in the warm months, you will run into a variety of spider silk across your path. And so it was recently on a walk in our woods. It was mostly webs of small orb web weavers strung across the trail, but at one point I found myself staring at a spider dangling at eye level. I reached for it and realized the spider was no longer there, just its last set of clothes – a shed exoskeleton.

I am always fascinated by the remains of insect and spider sheds. The lighter-than-air remains cause them to dance in the slightest breeze, but the detail of their former inhabitants are so revealing and beautiful. In spiders, they have a pop-top shedding style so the cephalothorax is removed like a can lid so the “new” spider can pull itself out of the tangle of old leggings.

When I touched it for a closer look, the shed dropped to the ground and landed on a mossy rock. It looked as if the spider was ready to run off again, but with its head oddly trailing behind.

As we approached the house, I checked the small pawpaw patch out back and noticed something disappear under the broad leaves of a small sapling. I eased my hand under the leaf and a spider popped back out on the upper surface.

And what a spider it was! I have photographed the female of this species, a magnolia green jumper, but had never seen a male. They are characterized by the two huge eyes in front and their insanely long chelicerae. 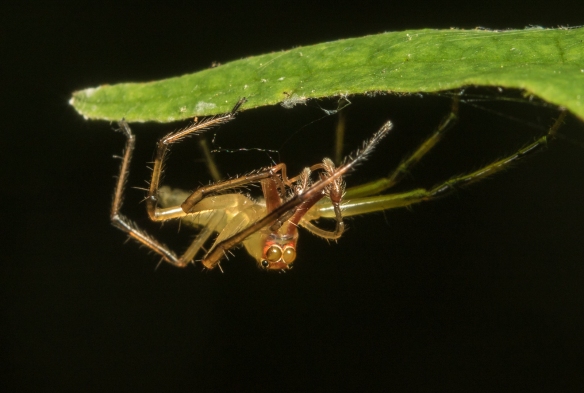 The magnolia green jumper under the leaf

This little guy was quite active and bold. I had to coax it out from under a leaf at first, but then it tended to move toward the camera and even jumped on the lens a few times. I would then ease it back onto a leaf and start the photography dance all over again.

There are four rows of two eyes each, with the two in front being very large

Both sexes have a raised “eye mound” with 8 eyes surrounded by orange. These spiders can scan the area in front of them by moving the rear of their lens (the actual “eyeball” is fixed since it is built into the carapace). Because the rear of the lens is the darkest part of the eye and it moves around, you can often see a jumping spider’s eye changing color as in the photos below. When it is darkest, the spider is looking straight at you, because then you are looking down into its retina.

The retina sweeping side to side in the eye

This series of photos also shows the chelicerae (jaws) – the brownish orange appendages coming out beneath the eyes. Coming down on either side of those are the pedipalps (or palps).

One eye dark, one lighter

Pedipalps resemble small legs, but, in males, they serve a reproductive function.

Here’s looking at you…

The tips of male pedipalps are modified with small swellings (that look like small boxing gloves) that contain a complex copulatory organ. Males deposit sperm from under their abdomen into a small sperm web and the then suck it up into the palpal organ. When he finds a receptive female, he inserts the palpal organ into a slit on her abdomen and squeezes out the sperm. I suppose it is safer that way considering she might want to make a meal of him. Probably another reason to have a lot of eyes if you are a spider.

Black Swallowtail egg on parsley on day 1 (click to enlarge)

Since I have what might be considered by some an abnormal fascination with caterpillars, I decided to keep track of the development of the Black Swallowtail eggs from the garden. The photo above is what a typical egg looks like shortly after it is laid.

Black Swallowtail egg just prior to hatching (click to enlarge)

Yesterday I was watering the garden and found an egg that was darker, indicating it might be close to hatching. I brought it in and took a closer look. You can see the larva inside if you look closely. The larva appears to be curled on the lower and right side of the egg with the head capsule near the top. There is also a dent in the egg so I was a bit worried that something had happened to it (or is this typical prior to hatching?).

I started taking photographs every few minutes and checking the egg for changes in between dinner ad catching up on some Daily Show episodes I had missed. Well, as my luck would have it, I looked at one point and the little guy had chewed his way out already….I had missed it. 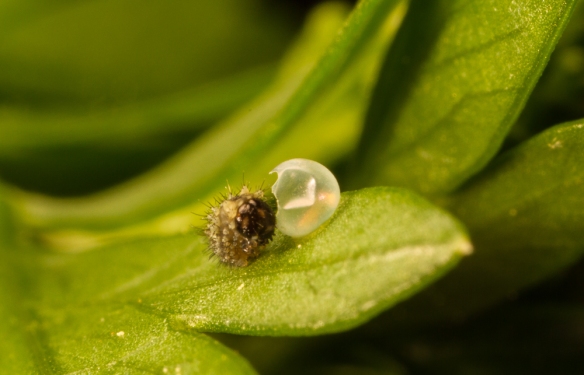 As most species do, the larva began to consume the egg shell. There are no doubt valuable minerals and maybe even symbiotic bacteria associated with it so it makes sense to recycle the shell. The tiny caterpillar was eating very slowly so the shell was not completely consumed for over an hour after it hatched. 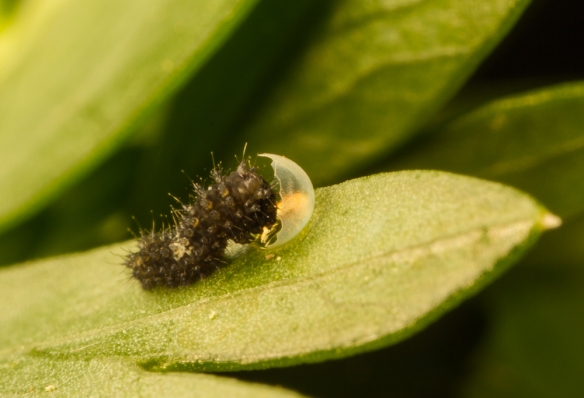 Meanwhile, the caterpillar I had photographed a little over a week ago has undergone its first molt. This one is feeding on rue and it seems the larvae tend to grow more slowly on that host plant than on fennel, parsley or carrots. Most caterpillars molt their skin five times from hatching to becoming a pupa. When ready, they typically spin a silken pad and attach themselves with their prolegs and become still for a day or two as changes take place for the molt. They then crawl out of their old skin and rest for an hour or two while their new skin hardens. Just like with the egg shell, they often eat their old skin for the nutrients. In the photo below you can see the shriveled first instar skin (excuvia) and detached head capsule lying alongside the newly molted and much larger second instar larva.