I think the most important quality in a birdwatcher is a willingness to stand quietly and see what comes. Our everyday lives obscure a truth about existence – that at the heart of everything there lies a stillness and a light.

After a rainy first day at Pungo, I headed to the coast, hoping for better weather the next day. On my way to Pea Island, I stopped at Bodie Island lighthouse early the next morning under gray skies and a steady breeze.

Over the years, I have had good luck birding here, especially on the large marshy ponds out past the lighthouse. But this day yielded almost no birds out there, at least none close enough to see. But the heavy rains the day before had left large pools of standing water in every low spot on the grounds, including a very large pool out by the parking lot. I pulled the car alongside just off the road enough to allow others to pass, and I sat for well over an hour, observing and photographing the birds feeding and bathing in the pool.

— The ibis continually probed the soft ground as they walked along, probably picking up worms.

— Some birds came to the pool to bathe.

My favorite subject at the pool was a group of Greater Yellowlegs feeding in the shallow water. They did not call so the best way to identify them as Greater Yellowlegs instead of their smaller cousin, the Lesser Yellowlegs, was their stockiness and the bill length relative to their head depth. In greaters, the rather stout bill is 1.5+ times the depth of the head. In lessers, it is just a little larger than the depth of the head, plus the bill is noticeably thinner its entire length. They were masters at catching earthworms that had no doubt come to the surface of the soil due to the flooded conditions.

The birds seemed totally unconcerned by my presence (and by a couple of other bird watchers out of their vehicles), but did fly off in a panic when two Bald Eagles came flying through, one chasing the other. They moved through so fast I missed my chance at a photo, but, after that, the only birds that came back were a few gulls and some grackles. But, a good start to my day on the coast. More about the other critters I saw in the next post.

The story of bird migration is the story of promise – a promise to return.

A week ago, we had a snow storm that crippled much of the south. Today, the temperatures soared into the 70’s. Less than two weeks ago, I stood in awe as thousands of Snow Geese swirled overhead and then landed amongst thousands of Tundra Swans feeding in a field at Pocosin Lakes National Wildlife Refuge. Two days ago, I could only find 8 Snow Geese amidst a flock of a few hundred swans. And even more telling was the view from the observation platform when we arrived. 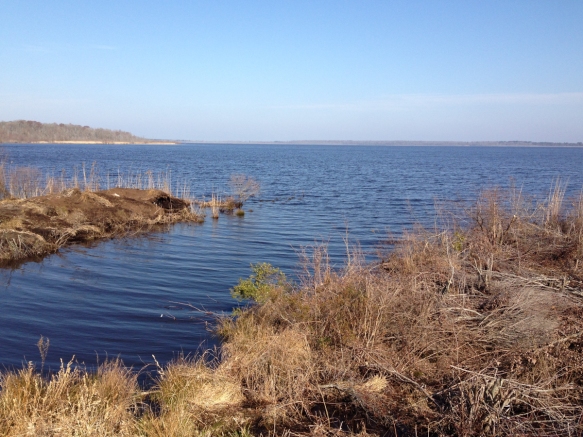 Pungo Lake after the birds have gone (click to enlarge photos)

Where thousands of white specks had dotted the lake only a couple of weeks ago, there was now not a single one. No duck, goose, or swan could be seen anywhere on the lake. We altered our plans to hike and drove through the refuge looking for birds. A few swans flew overhead, but we only saw two eagles – on my last visit there had been over twenty. The eagles follow the flocks of large birds when they are on the refuge…no eagles, no flocks.

We drove to Mattamuskeet to see if that refuge was more to their liking. Crossing the lake, we could see a few Canada Geese, but no swans. But the impoundment along Wildlife Drive was full of ducks, more than I had seen in there all winter. 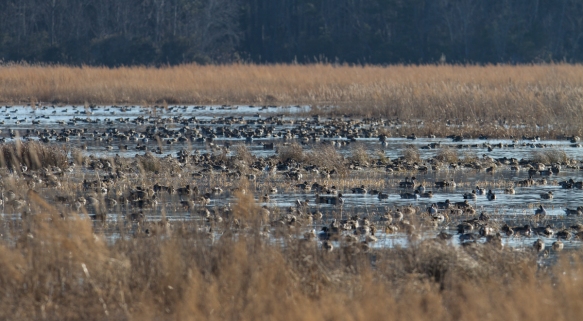 Large flock of ducks in impoundment at Mattamuskeet

Most were Northern Pintails, although there were also large numbers of American Wigeon, Northern Shovelers and Blue-winged Teal. A few Tundra Swans were mixed in, but it appears as though most have headed out from here as well. 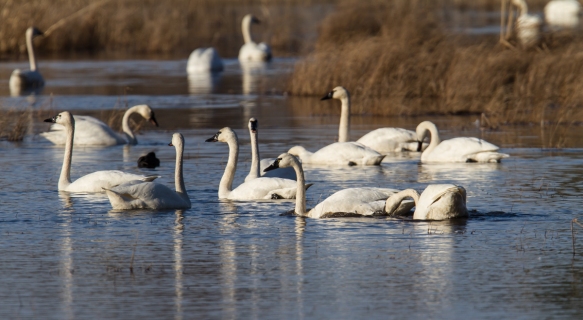 A few remaining swans at Mattamuskeet

Most were actively feeding, probing the soft mud and shallow waters with their long bills, looking for small fish, or crayfish, worms, and other invertebrates. 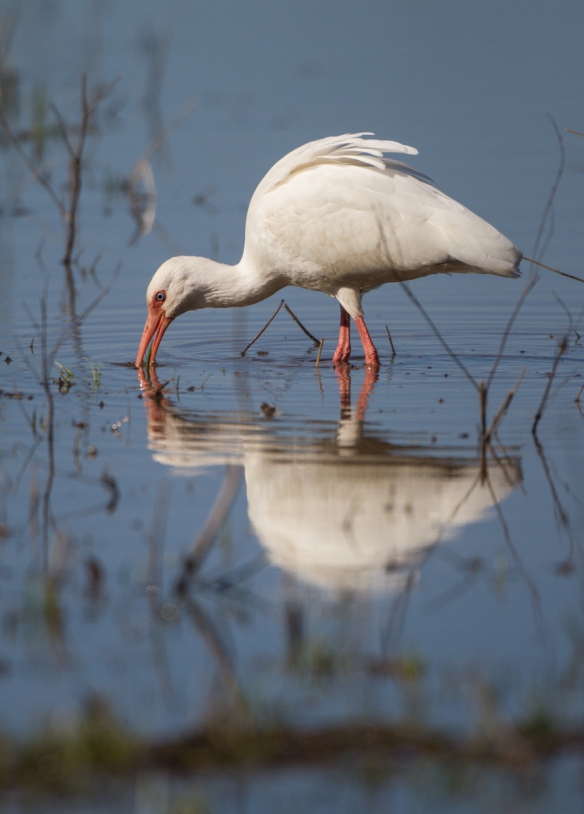 A few were off by themselves and were busy bathing and preening. 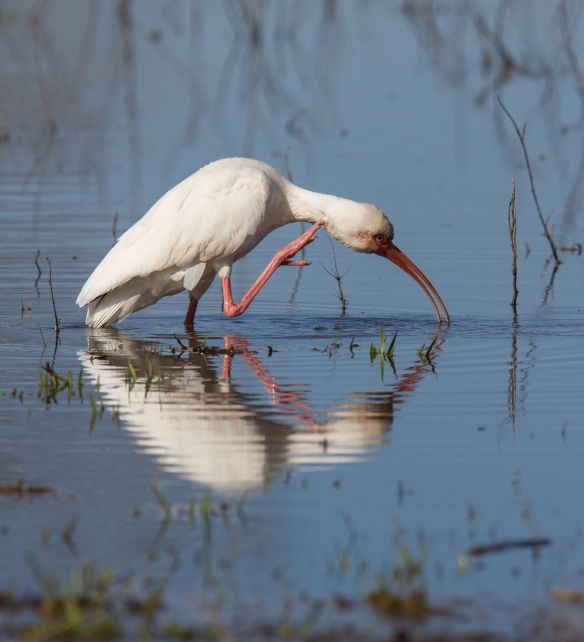 After preening, a White Ibis flies off to feed

Driving back to Pungo on the way home, we saw a few flocks of swans returning to the lake for the night, but no Snow Geese. Looking back at my notes from the past few months, I found that I had seen the first of the Snow Geese back on November 23. That was a lone bird mixed in with a flock of Tundra Swans, who had started arriving a few weeks earlier. Thousands more arrived soon after, providing myself, and many other visitors, with incredible sights and sounds all winter. Now, in mid-February, most were gone. They are returning to their nesting grounds in northern Canada and Alaska, a few thousand miles from here.

Another amazing season of wildlife spectacles at Pungo and Mattamuskeet has drawn to a close. And a new season begins. This morning I heard a loud dawn chorus of birds in the woods outside my house. Last night, the calls of Upland Chorus Frogs filled the night air. It is one of the things I love most about this region, the progression of the seasons and the accompanying ebb and flow of life. I’m sure I will find something to keep me occupied until next winter when the first Snow Goose wings its way south and lands at Pungo Lake. Just as the waterfowl are flying north, our spring is moving north and will be here soon, bringing a new burst of life to my woods. Be sure to make some time to get outside in the next few weeks and enjoy its return. 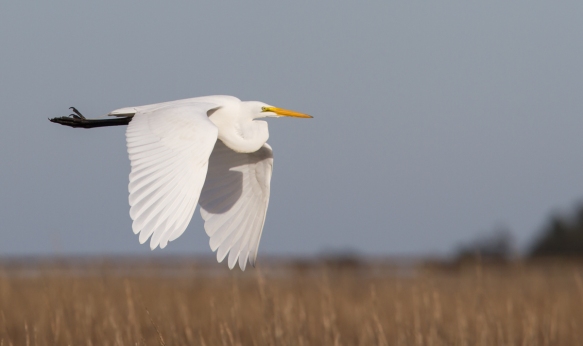 A Great Egret flies by on the marsh side of Huntington Beach State Park, SC (click photos to enlarge)

My first stop on my trip south was to one of my favorite photography destinations, Huntington Beach State Park in South Carolina. There always seems to be something to photograph there, especially along the causeway that separates the salt marsh from the freshwater pond. Two great habitats adjacent to one another provide plenty of opportunities for seeing all sorts of interesting critters. This is especially true if you time your trip to coincide with low tide on the marsh side occurring close to sunrise or sunset. Such was the case last week when I stopped in for the afternoon on my way south – the tide was falling and skies were partly cloudy. But, by Huntington Beach standards, things were pretty slow on this cold day. 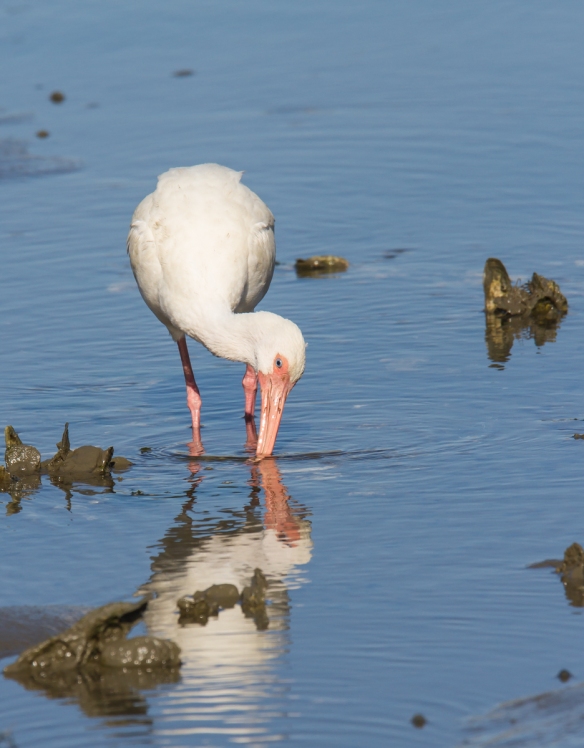 White Ibis probing for prey in an oyster bed

There were plenty of ducks on the pond side, but very little activity on the marsh side of the causeway (which is where the good light is in the afternoon). Finally, a couple of White Ibis landed and started feeding in a tidal channel amongst the exposed oysters. They probed and swung their head from side to side. Periodically, they would open their long bill, and with a snap of their head, gulp down some unseen prey.

White Ibis with what looks like a Grass Shrimp

When I examined the images later i saw what looked like small, clear shrimp as their primary taste treat, most likely a common species known as Grass Shrimp. 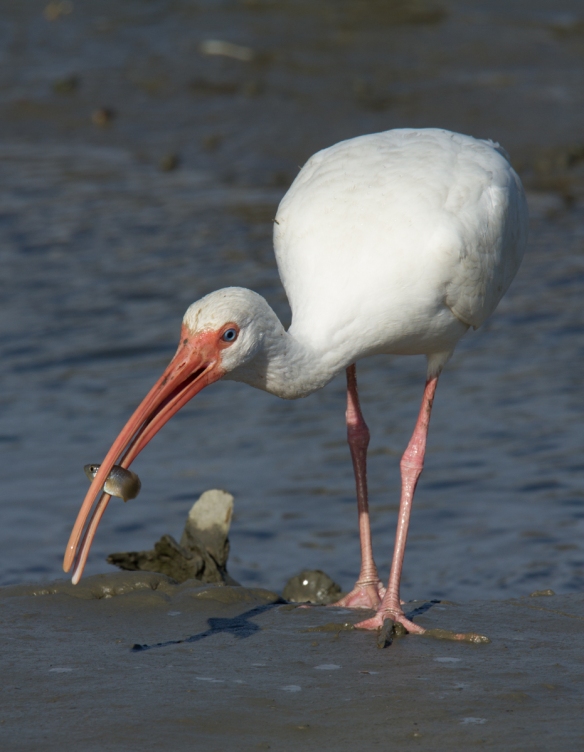 White Ibis captures a small fish, most likely a killifish

Every now and then an ibis would land a bigger meal, usually a small fish resembling a killifish of some sort.

Another wader joined the ranks of the ibis and began searching the retreating water for its dinner. Although I was hoping for a big fish capture (it missed on this strike), the Great Blue Heron seemed content to snack on the Grass Shrimp as well. 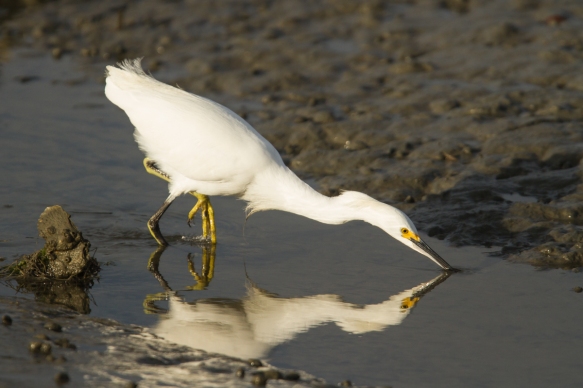 The last wader to join the hunting party was a gorgeous Snowy Egret. 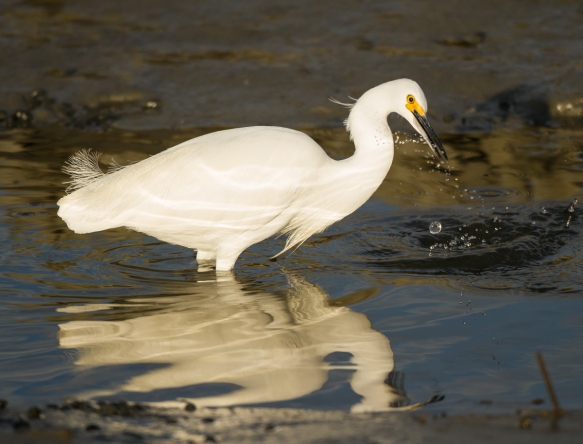 Snowy’s tend to be a little animated in their hunting style, with quick steps, jabs, and then, unlike the upward head snap of the ibis, a sideways head jerk followed by a gulping bill gape. 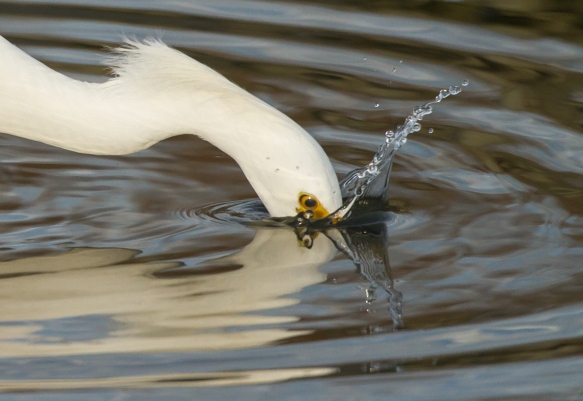 Suddenly, the Snowy Egret ran and plunged its stiletto bill deeper into the channel and emerged with a most unusual-looking prey. 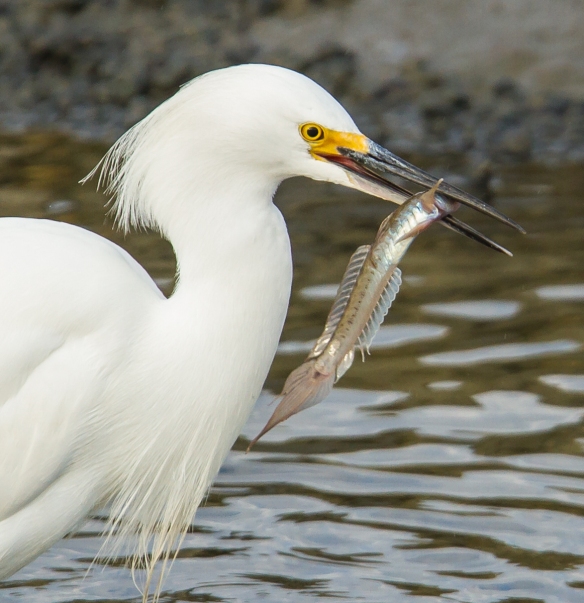 After carrying the fish around for a minute or two, the egret finally managed to gulp it down. 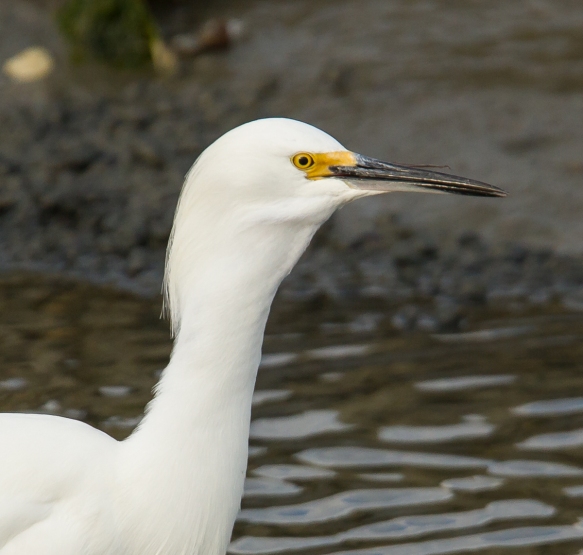 That seemed to satisfy the Snowy Egret and it flew off down into the main marsh. 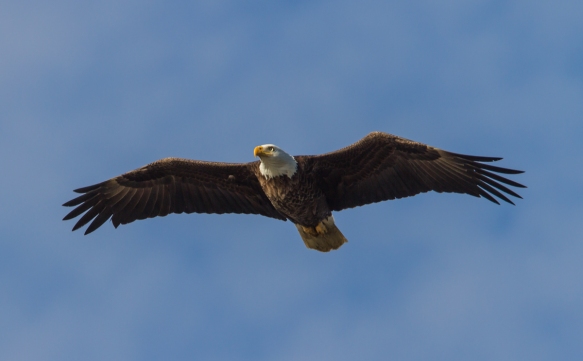 Bald Eagle cruises over the marsh hunting for any easy prey

Right after that, one of the local Bald Eagles cruised overhead, scanning for any easy meal it could catch, or steal from another of the hunters found at Huntington Beach. I was getting hungry myself, and as a cloud bank started to move in, I headed south to Savannah for the next leg of the trip.