I glanced out the back of the screen porch the other day and saw a butterfly behaving as if it were going to lay eggs – that typical fluttery flight around a plant that indicates she is searching for just the right spot to lay an egg. 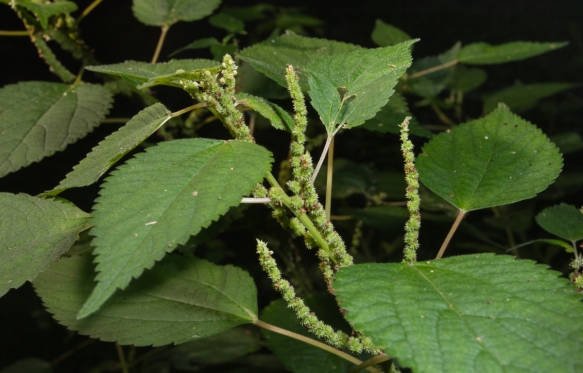 The butterfly was one of the anglewings – either a Question Mark or an Eastern Comma, and the plants were some False Nettles (one of the anglewings’ host plants) mixed in with some ferns and other moisture-loving plants in a shady, wet drainage area out back. I have been seeing Eastern Commas feeding on the figs in the garden but this one would not slow down long enough for me to see any details on the wings to make a clear identification. I went inside and grabbed the camera with the 300mm and an extension tube and fired off several shots as the butterfly flitted about quickly laying an egg here and there on the undersides of leaves.

I often use the camera to help me identify species that are moving too quickly for a good view. Once you look at images on the computer, you can often see identifying characteristics more clearly. Such was the case in one photo this time – I could just make out the distinct marking on the underside of the wing that identified the egg-layer as a Question Mark, Polygonia interrogationis. 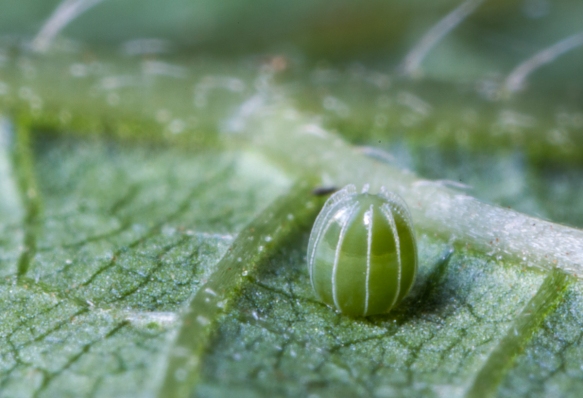 I went back outside and started turning over leaves looking for eggs and finally found one  – a very small greenish egg sculpted with vertical ridges. The eggs of Question Marks and Eastern Commas are identical so seeing the egg-layer is important for identification. In reading about these two closely related species, I found an interesting note about their eggs – females often lay eggs in short stacks, one egg on top of the other, in stacks of a few up to 8 or 9 eggs. Naturally, I went back out to see if I could find any. 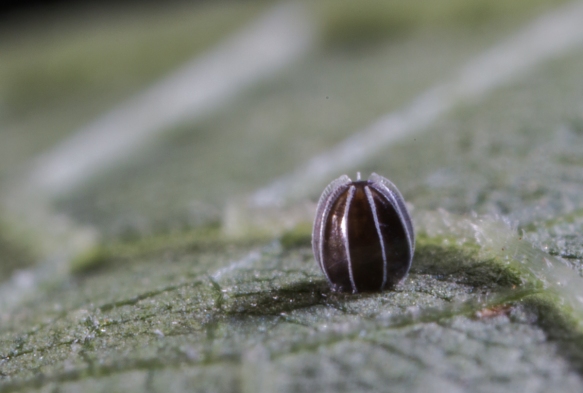 Dark egg of an anglewing

My first find was a single darker-colored egg on the same plant. I assume it is an egg that was laid earlier and may be getting ready to hatch as I have seen other species’ eggs darken prior to hatching. I suppose the other possibility is that the egg has been parastized by something. I’ll have to wait and see.

After searching the False Nettles for eggs and only finding singles, I went up to the garden to check another host plant that I know is growing up there – a Winged Elm sapling. Question Marks and Commas have three common host plants in our area – False Nettle, Stinging Nettle, and elms. The first leaf I looked under had a short stack of two dark eggs. There were lots of eggs on this tiny sapling, perhaps due to the abundance of decaying figs in the adjacent trees that attracted the butterflies to the area.

It wasn’t until I had set up to photograph the stack of two eggs that I noticed a cluster of eggs on a curled leaf at the tip of the branch, including a stack of three eggs. It looks so strange and even though I searched the internet  and all of my reference books, I came up with no clear explanation as to why these species stack their eggs. Some butterflies, such as the Pipevine Swallowtail, have larvae that contain toxins and lay their brightly-colored (warning colors like orange or red) eggs in clusters. Their distasteful caterpillars usually feed in groups which may afford them more protection from predators. I also found a  reference to a species in England whose stacks of eggs are said to resemble the flower parts of the host pant, thus camouflaging the eggs to a certain degree. None of these explanations seems to quite fit in this case, so the reason for egg stacking remains a mystery to me.