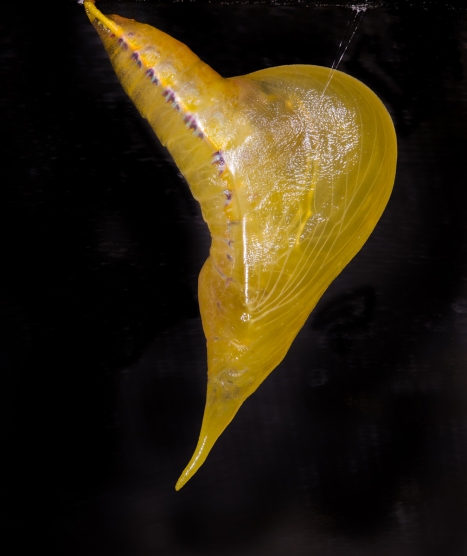 I blogged last week about the Cloudless Sulphur butterflies I have been seeing down east and in my Piedmont garden lately. I included the photo above of a fresh chrysalis. I have only seen one other chrysalis of this species and it was much more colorful, but the field guides said their color can be quite variable so I didn’t give it much thought. The caterpillar had been placed in a mesh cage just before pupating as it had stopped feeding and was crawling off the cut plant I had brought it in on, sure signs that it was getting ready to transform. And, as they often do, the caterpillar had again crawled off the plant material I had provided in the cage and pupated under the edge of the lid of the container, making for a less than ideal photo backdrop, and requiring me to pin some black felt behind it for the photographs. 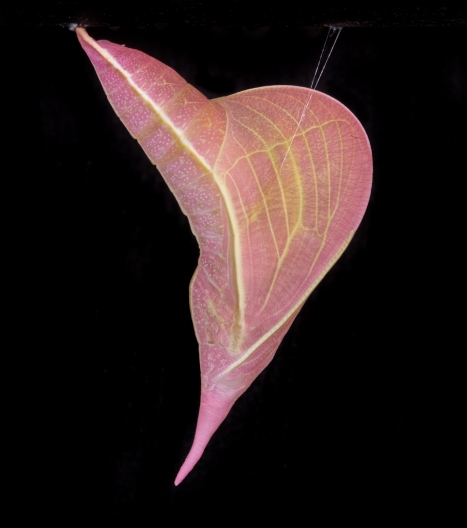 I checked on it again a couple of days later and was amazed at the color change, much more like the one I had found a few years ago in a patch of host plants down east. The colors are beautiful – a faint pink, tinged with yellow highlights, and the whole thing being a odd obliquely stretched form suspended by a silken girdle. The color change should not have surprised me as I have seen several species which undergo a shape and color change in the chrysalis within a short time after they form. There is usually some adaptive advantage for even unusual forms and colors in nature but I was initially at a loss as to how this odd combination might serve the pupa.

So, I went back out to the power line this morning and looked at the plants. The explanation may lie in the fading blossoms. As the bright yellow flowers fade, they droop, and when viewed from the side have a shape similar to the chrysalis. 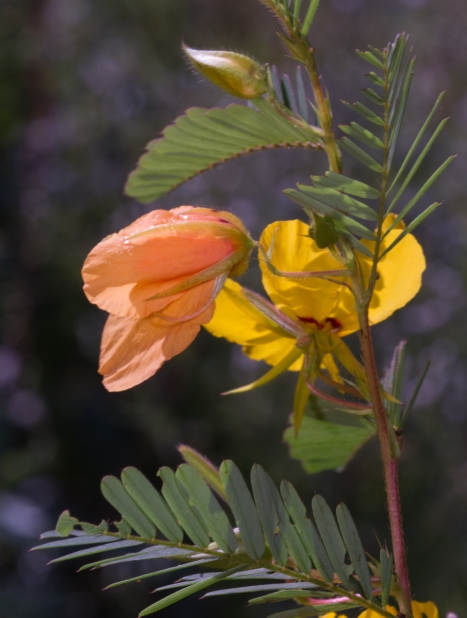 Partridge Pea flower as it fades

They also start changing color to an orange-yellow, and then, gradually, to a somewhat pinkish-yellow hue. The lines on the chrysalis may mimic the sepals and folds in the fading flower petals as well. I also noticed a few pinkish leaves of other nearby plants as they begin to turn color for the onset of autumn. Online, I found images of a chrysalis from this species that was light green and the lines resembled the veins of a leaf. Perhaps this species can have a chrysalis that is variable depending on the surrounding plants. Whatever the case, it is certainly one of the more unusual and beautiful chrysalises I have found.