The feeling of respect for all species will help us recognize the noblest nature in ourselves.

I visited the nearby woodland pool yesterday to check on the Spotted Salamander egg masses I photographed a couple of weeks ago. After a couple of dips with the net, I was astonished at how large the abundant Marbled Salamander larvae have grown and wondered if any of the Spotted larvae will survive. A couple of more dips revealed a creature that requires a bit of studying before most folks could appreciate it – yet another efficient predator of the pool, a Giant Water Bug.

Belonging to the insect order, Hemiptera, these are medium to large aquatic bugs that live in quiet pools and ponds. This particular species is one of the smaller ones, perhaps an inch long. They all have piercing-sucking mouth parts, seen in the photo above as a backward curving beak coming out from under the “nose” of the bug. They breathe by positioning themselves at the surface of the water and poking their breathing tubes (located on the rear of the abdomen) into the air. They pull in an air bubble and hold it under the wings as the dive and breathe.

Giant Water Bugs are voracious predators on all things pond-dwelling (I placed one in a bucket and when I got it out it had grabbed and was feeding on a small tadpole). They  can inflict a bite if handled carelessly (hence one of the common names, Toe-Biter). When they grab prey, they inject it with paralyzing fluids and digestive enzymes. Their front legs are modified as raptorial legs for grabbing their victims (much like a Praying Mantis) and the last two pair are adapted for swimming.

Giant Water Bug – male with eggs on back

One of the more unusual aspects of their ecology is that in some species, female Giant Water Bugs cement their eggs to the back of a male. The male carries the eggs until they hatch ( a couple of weeks), presumably protecting them from predators, and aerating them by fanning them with his hind legs underwater. 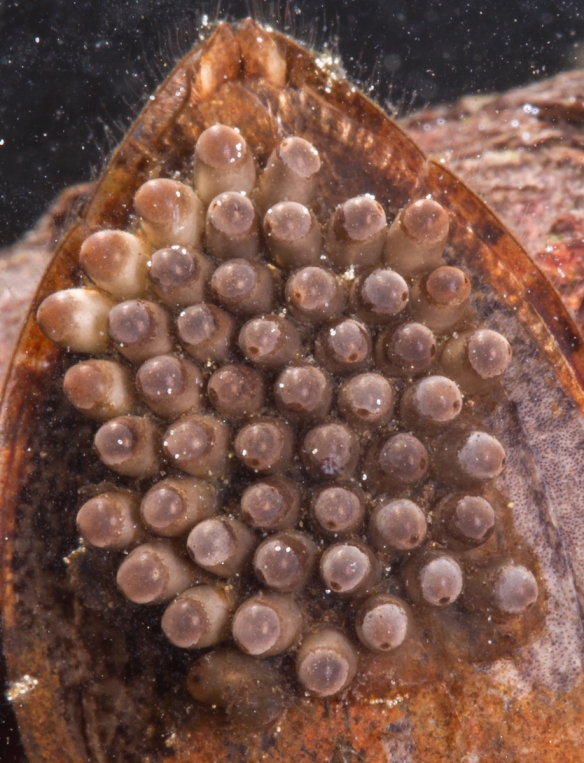 Close up of eggs

A former co-worker at the museum, Chris Goforth, did extensive research on this group of organisms for her dissertation, and recorded many of their fascinating behaviors in a series of blog posts ( a sample can be found here – http://thedragonflywoman.com/?s=giant+water+bug+fun+facts).

I hope you all have a Happy Earth Week. Be sure to get outside and look for these or some of the other amazing creatures we share the planet with that may be living in s woodland near you.