How completely the life of a bird revolves about its nest, its home! In the case of the wood thrush, its life and joy seem to mount higher and higher as the nest prospers.

On a walk in the woods last week, I spotted a small bird that I didn’t recognize. It was brownish in color and perched on a log. When I got the binoculars on it, I recognized that big-eyed, spiky-feathered look of a young bird…a fledgling of some sort. My first thought was Ovenbird, and within a couple of seconds, an adult Ovenbird flew in, confirming it. Turns out there were at least two young, and they both flew off with the adult soon after. Earlier this spring, I had heard a male Ovenbird singing frequently in this same area, so it seems a pair had built a nest and successfully fledged some young. I smiled, as it is never easy for birds to successfully rear young with so many things that can go wrong. What had started us on this path through the trees was seeing a Wood Thrush flying by with a beak full of worms. No doubt headed to a nest to feed some hungry babies. The Ovenbirds had distracted us, but we continued on in the direction where we had lost sight of the Wood Thrush. 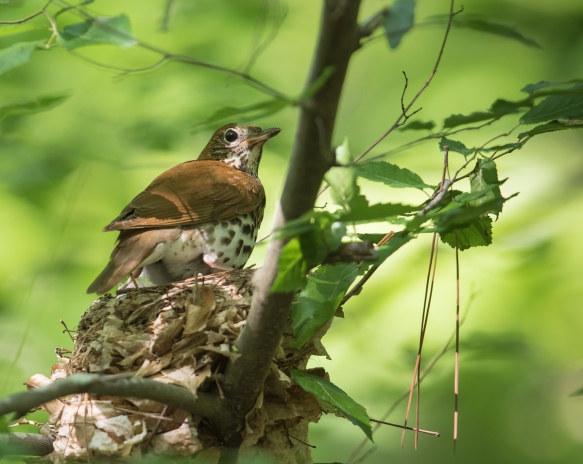 Suddenly, there it was, less than twenty feet away, a Wood Thrush nest with an adult bird sitting on the edge. We gave it a wide berth as we walked out to the nearby gravel road and the adult stayed with the nest, watching us. The nest was about 7 feet off the ground in a fork of a small Ironwood (Hornbeam) tree. I was surprised at how visible it was – good for photography, but bad for protection from predators. 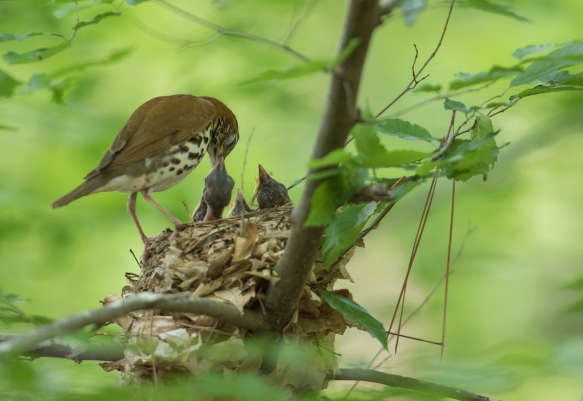 Over the next two days, I sat in a camouflage blind and observed the comings and goings of the two parents as they brought beak-fulls of food (mainly earthworms) to the four nestlings. 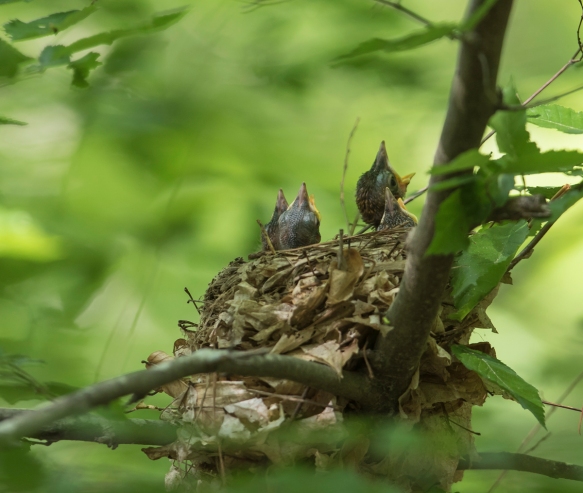 Based on what I could see of the young through my telephoto lens, I am guessing they were three or four days old.

Although I could not tell the difference between the sexes of the adults by their feather pattern, I could differentiate them by their behavior. The female would often fluff out her belly feathers and sit on the nestlings as if brooding. The male never did this, and frequently left the nest well before the female returned with a beak full of food. To my surprise, on a couple of occasions, he even sang quietly while at the nest, perhaps in response to other males singing loudly nearby.

Most of the time I observed the nest, one of the adults was sitting nearby. This seemed like a good strategy given the number of potential threats in these woods – American Crows, Blue Jays, Black Rat Snakes, Raccoons, Gray Squirrels, feral or neighborhood cats…the list was pretty long. I did see one of the adult Wood Thrush harassing a Blue Jay that approached within about twenty feet of the nest. When it finally left, the Wood Thrush pair stayed off the nest for several minutes and then came back, checked on things, and resumed their feeding. The typical pattern was for one of the birds to be on or next to the nest until the other adult was in view with more food, then it would fly off to forage while the other bird fed the young.

This clip shows an example of the typical feeding sequence. The female is the one initially at the nest. She leaves when she spots the male coming in. He brings in the food and proceeds to stuff morsels into the open beaks before him. Notice the spider that has apparently escaped from the beak in transit and is clinging to the breast of the adult male. Then watch what happens with the spider after the initial feeding sequence.

After doling out the food, the adult bird waits until one of the young birds presents a fecal sac, then it grabs it, and eats it. Only once did I see the adult take the fecal sac and fly off with it as I have seen with many other species. Some references imply that the adult Wood Thrush do this for the first few days of the nestlings life, and then presumably fly off with it to discard it away from the nest. All of this is to keep the nest area clean and to avoid providing clues to predators as to the nest location.

I was gone for three days, and was looking forward to seeing how much the young birds had grown on my return. The next morning when I went out, I could see from the road that something was wrong. 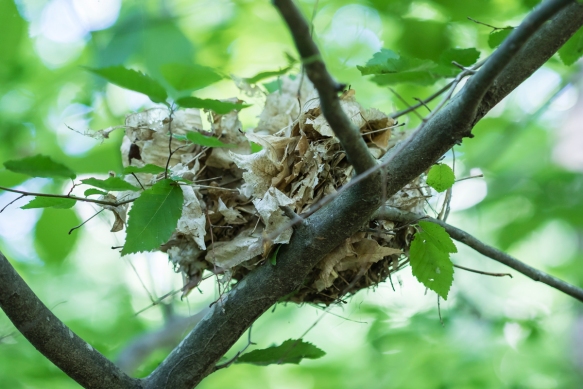 The nest was slightly skewed in position, and there were no tiny heads poking up above the rim. Dang it…something had found the nest. I knew it would be empty, but I checked anyway. Sure enough, the babies were gone. Looking around I didn’t see any feathers or other signs left by the predator. I assume the adult birds escaped harm. The nest was only slightly messed up, one side showing a little disturbance. My best guess is an aerial predator – either American Crows or Blue Jays. Both birds are active in this area every day, both are extremely intelligent and sharp-eyed. I worried that my photography of the nest (from a camouflage blind that I removed after each session) might put it in danger, and now I feel sick about that. But, I will never know.

It turns out, Wood Thrush may be particularly susceptible to nest predation and that is one reason given for their decline in numbers in recent decades. Fragmented forests (tracts that have portions cleared for some purpose) tend to allow more predators (and nest parasites such as Brown-headed Cowbirds), access to forest-dwelling species such as Wood Thrush. And, since Wood Thrush tend to build their nests in fairly visible locations, they often suffer nest predation. I found several studies that showed a nesting success rate for Wood Thrush of between 26-30%. One study, in Great Smoky Mountains National Park, placed small cameras at Wood Thrush nests and documented the variety of dangers over the nesting cycle. It seems there are many more hazards when the nest contains just eggs. Egg predators included White-footed Mice, Blue Jays, American Crows, Gray Squirrels, Eastern Chipmunks, Black Rat Snakes, and Black Bears. Once the eggs hatched, the number of documented predators dwindled to three – American Crows, Black Bears, and an Eastern Screech Owl.

Interestingly, it is not just an issue of modern times. While reading John Burroughs’ essay on Wood Thrush from the late 1800’s, I found this quote…

There is no nest-builder that suffers more from crows and squirrels and other enemies than the wood thrush. It builds as openly and unsuspiciously as if it thought all the world as honest as itself. Its favorite place is the fork of a sapling, eight or ten feet from the ground, where it falls an easy prey to every nest-robber that comes prowling through the woods and groves.

I imagine his world was one of a patchwork of forest and cleared farmland, perhaps similar to the fragmented forests and developments of today. All of this points to the fact that it is a tough world out there for our song birds. This spring, I have seen evidence of successful fledging of Carolina Chickadees, Carolina Wrens, Eastern Bluebirds, Ovenbirds, and Downy Woodpeckers near the house. I have also observed nest failures of this Wood Thrush and a Northern Cardinal nest. There are obviously many hazards that birds face and we should make every effort to minimize those that we can, such as window kills, outdoor cats, the overuse of pesticides, and the destruction of habitat. Planting native plants is certainly a way to encourage birds and provide more food. I have a small amount of grassy lawn and I never saw the Wood Thrush foraging in it (like we see with American Robins searching in lawns). Instead, they were always in the leaf litter in the natural areas of the yard or beyond, flipping leaves in search of prey that included earthworms, caterpillars, a moth, and spiders. A diverse habitat can support a diversity of invertebrates and therefore a diversity of birds and other wildlife – it is as simple as that. I still hear numerous male Wood Thrush singing all around the property. I imagine the pair I observed will attempt a second brood. Nature is persistent, and, if given a chance, will persevere. Let’s all do what we can to give it that chance.

8 thoughts on “The Struggles of Forest Birds”