You may know the true observer, not by the big things he sees, but by the little things; and then not by the things he sees with effort and premeditation, but by his effortless, unpremeditated seeing—the quick, spontaneous action of his mind in the presence of natural objects.

I had the good fortune to do something this past weekend that I have never done – go on a pelagic birding trip off the coast of North Carolina. I went with a group organized by the North Carolina Museum of Natural Sciences that included some museum staff, educators, and some members of the public interested in birds. The trip was aboard the Stormy Petrel II, a 61 foot charter boat run by Brian Patteson of Seabirding. Though I have been to sea several times on a variety of vessels, this is the first time I have gone off the Outer Banks, and the first time with the primary purpose of seeing birds and other marine life.

A beautiful sunrise to start the day (click photos to enlarge)

The day started early with a gorgeous sunrise, which is a good sign if you are heading offshore in winter. It was cold, and I had put on everything I brought with me, just in case.

Birds made their presence known even before we left the dock with a sharp-shinned hawk gliding over us as we listened to our orientation for the charter. I was reminded of the incredible abundance of life on our coast as huge numbers (many thousands) of double-crested cormorants began leaving their evening roosts as we departed the dock.

A beautiful golden light flooded the scene when the sun cleared the low clouds, making everything glow. Brown pelicans were among the first birds to accompany us as we headed through Hatteras Inlet.

First mate, and birder extraordinaire, Kate, throwing out some chum behind the boat

It didn’t take long to realize that the excellent reputation I had heard for the birding (and other) knowledge of Brian and his crew are well deserved. Brian and his first mate, Kate, both have extensive knowledge of the area and its abundant wildlife. They quickly picked out rarities among the hundreds of birds surrounding us and could do so at incredible distances (on a boat that was rocking fairly significantly at times). The John Burroughs quote above is for the museum staff, and some of the birders aboard, but especially for Brian and Kate. It is always a joy to be out in the field with people that are both knowledgeable about the area, and passionate about what they do.

As we got offshore and began to throw chum off the stern, the bird assemblage grew in numbers and diversity. At first it was mainly several species of common gulls, some pelicans, and northern gannets, then some rarities, that are seldom seen from shore, started to accompany us. 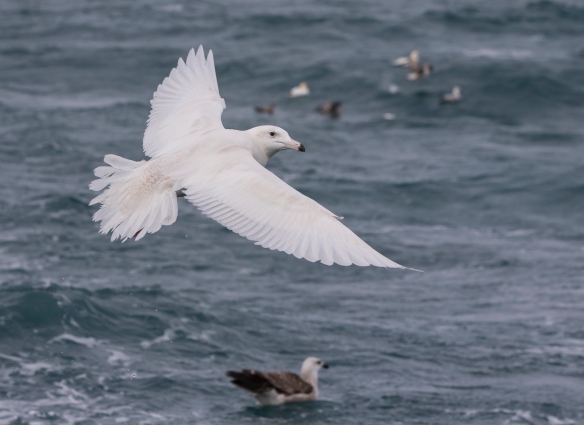 Glaucous gull is a new species for me

One of the first was a new species for me, an incredibly beautiful glaucous gull. This large white gull is an immature bird with some faint mottling and a black-tipped bill.

Northern fulmar rocketing by the boat on outstretched wings

Next was a species I had seen a decade ago when I was lucky enough to spend time in the Arctic aboard a Russian icebreaker on a climate research and education mission. Northern fulmars are somewhat gull-like in appearance. They have thicker necks and can be recognized at great distances because of their flight pattern – rapid, stiff wing beats, or long periods of soaring, often in an undulating pattern above the waves, with stiff wings, and often turning with wings held perpendicular to the ocean. They are fast, efficient fliers, built for taking advantage of the uplift from ocean waves. They can be variable in color, but we mainly observed the lighter color form. 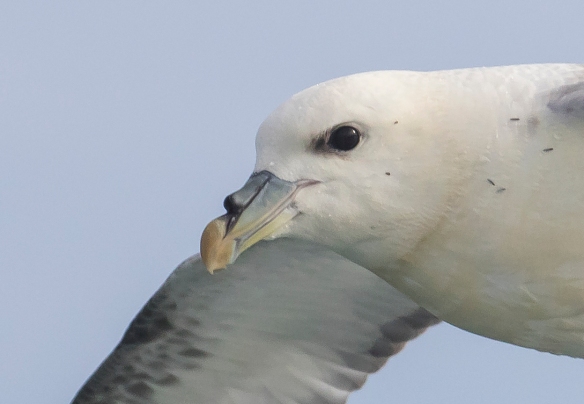 Fulmars are one of the tubenoses, recognized by a hollow ridge on top of their bill

Fulmars belong to a group known as tubenoses along with albatrosses, petrels, and storm-petrels. These pelagic species must drink sea water, and therefore are adapted to rid themselves of excess salt via active salt glands. The tubular structures on top of the bill are thought to help direct the excretions from the salt glands away from the eyes. The tubes also play a role in the well-developed sense of smell that these birds use to find food in their vast ocean habitat. A keen olfactory sense is rare among birds, but tubenoses use both sight and smell to locate food. They are known to fly back and forth into the wind tracing the source of a food smell.

Northern fulmars are a long-lived species

Many pelagic species are long-lived and take years to reach breeding age. Northern fulmars may be one of the champions in this regard. They generally do not breed until they are 8-10 years old, and may live 40 or more years. One reason they may live so long is that both chicks and adults have what seems like a very effective deterrent to predators – they can eject a foul-smelling stomach oil up to several feet. This can be particularly effective against avian predators as the oil can mat the feathers together, causing the death of the predatory birds.

At “the change”, where warm waters (bottom) meet colder waters

Not far offshore we reached what the captain called, “the change”, a zone where two water bodies of different temperatures converge. It was immediately noticeable by a distinct line between water of two colors – a brownish tint to the colder inshore waters of about 50+ degrees F, and the clear, blueish-green waters with temperatures around 70 degrees F. This zone creates a concentration of sea life and sea birds.

A flock of razorbills

In addition to the fulmars, we started seeing scattered small flocks of razorbills streaking just above the waves. Razorbills are in the group known as alcids that also includes Atlantic species such as puffins, murres, and dovekies. This group, also known as the auks, all have short, somewhat stiff wings that they use in pursuit diving for their oceanic prey of small fish and marine invertebrates. They tend to fly low over the water with rapid wing beats.

We did see a few Atlantic puffins, although most at a bit of a distance. A few kept leaping out of the water, flying low for a short distance, and then plunging back into the waves. The abundance of gulls, especially larger predatory species such as great black-backed gulls, was apparently enough to make these small birds very nervous about being exposed on the surface.

At one point a shout went out from the bridge – “black-capped petrel off starboard”. This is a species not often seen this close to shore, so it was a great find on our cruise.

We also saw a couple of shearwaters, another type of tubenose. A manx shearwater made a quick pass and a sooty shearwater stayed with us for several minutes, joining the feeding flock behind the boat. They exhibit what is called dynamic soaring, alternating between arcing above the water and dipping and soaring just above the wave tops (“shearing” off the top of the water). 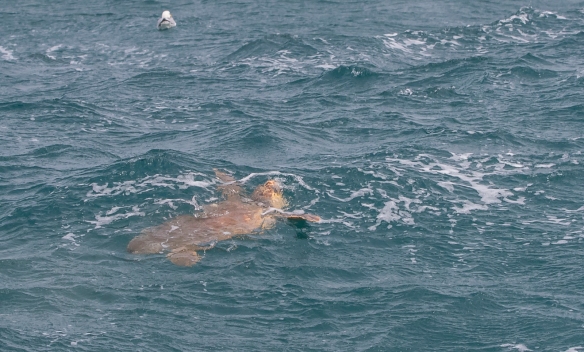 One of several loggerhead sea turtles we saw

The abundance of life in this zone included many species other than birds. We saw several sharks, including a couple of very large hammerheads, plus a number of sea turtles.

Ocean sunfish fin sticking out of the water

A highlight for many was the appearance of a huge ocean sunfish, Mola mola. These bizarre-looking fish are the largest of bony fishes in the sea, reaching up to ten feet in length and 5000 pounds.

Atlantic spotted dolphin next to the boat

While cruising back and forth within sight of the Diamond Shoals Light, we were entertained by a pod of Atlantic spotted dolphins, Stenella frontalis. These beautiful creatures of the Gulf Stream frolicked next to the boat for many minutes, riding the bow wave and occasionally leaping out of the water to the excited shouts of everyone (even those that were experiencing the scourge of rough waters, seasickness). 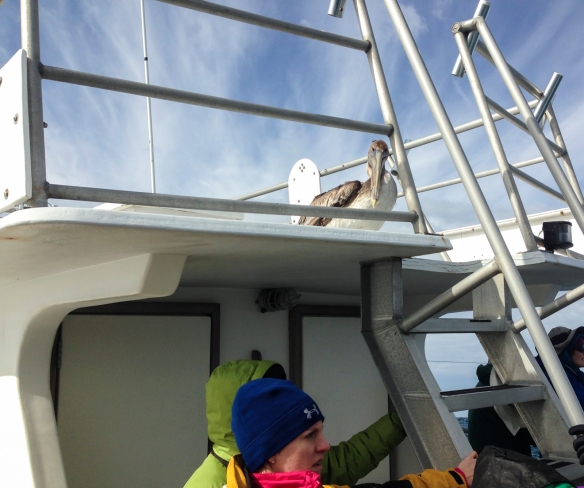 Look who is coming aboard!

We also had a close encounter of the pouched kind…a juvenile brown pelican landed on the top deck of the boat and sat up there for quite some time before flopping down on the head of someone trying to recover from her queasiness on the rocking boat.

This pelican hitched  ride with us for a couple of hours

Kate helped the bird off the boat not once, but twice before it got the message that this cruise was for paying passengers only. It was an incredible adventure for everyone. The museum staff had prepared everyone well for the journey with information on hat to bring and how to best avoid seasickness. They also had given great information on some of the species we might expect to see. I ended up taking more photographs than I ever have in one day, many taken while trying to capture the amazing dives of the elegant northern gannets that accompanied us all day (more on that in the next post). For more information on the trip, including a species list, you can visit Brian’s blog. For a good overview of the importance of this area to marine life, I highly recommend the book, Gulf Stream Chronicles, by the late Dave Lee, an ornithologist at the NC Museum of Natural Sciences. Dave worked for years helping to document the bird life and other marine species found off the Outer Banks and helping reveal how rich this ecosystem is in ocean life. Below are just a few more images from an amazing day in the critically important waters off our coast. 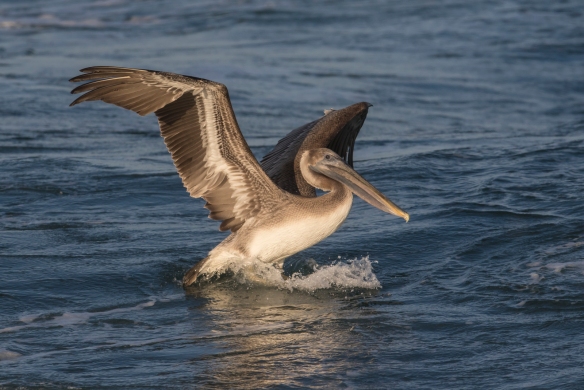 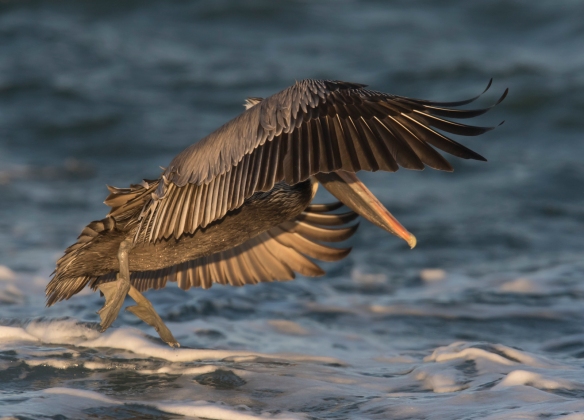 Brown pelican in the golden glow of sunrise 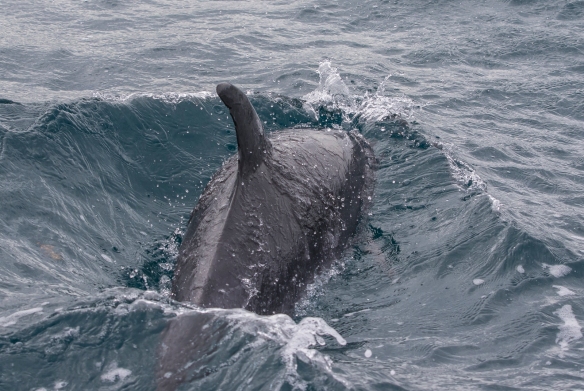 A dolphin surfaces next to the boat

This glaucous gull followed us most of the day

Northern fulmar riding the wind above the waves

Mass of birds feeding on chum behind the boat

Northern gannet (more on this species in my next post)