Life wants you to have gratitude for the gift of living.  Treasure every second.

The season is about over. It is hard to believe I just finished what is probably my last tour for this winter season at Mattamuskeet and Pocosin Lakes. But, if it is to be the last, at least it was a spectacular one. I was with a wonderful couple from Raleigh that were excited to see everything and learn about the incredible diversity of wildlife in the area. And we got great looks at a lot of species, including a couple of rarities.

Ice on reeds at Lake Mattamuskeet (click photos to enlarge)

We moved up our scheduled time one day to Sunday morning, due to the predicted wintry weather moving into the state on Monday. To be honest, it was wintry already, with low temperatures in the  20’s when we arrived at Mattamuskeet National Wildlife Refuge. And that means ice. It also means active birds, so we were in for a treat.

American bittern in its usual spot

As has been the case most of the winter, there were few birds were along the causeway, probably due to the extremely high water making it too deep for effective feeding by most waterfowl. As we turned into the refuge, things picked up. Right away, I spotted the faithful American bittern hunting in its usual spot next to Wildlife Drive.

With the high water, the bittern was a bit more exposed as it fed along the edge of the water. That gave us a chance to really admire this beauty.

I put the scope on it to really be able to see the subtle colors, piercing eye, and greenish-yellow legs of this usually incredibly well-camouflaged marsh inhabitant.

A little farther down the road we spied an unusual-looking mammal, a very light-colored nutria. A few other, darker nutria, had greeted us when we first arrived, looking somewhat stunned in the cold weather (these South American imports don’t seem to do well when ice appears). But this little blonde guy had been feeding on the bank in the sunlight, and seemed now to be waiting for us to move on so he could get back to his lunch break. This is the first nutria I have seen with this coat color.

American coot skating on the marsh

Flocks of American coot dotted the canal banks and patches of open water, while others skated on the skim of ice out in the impoundment. You can really appreciate their lobed toes when you see them up on ice. 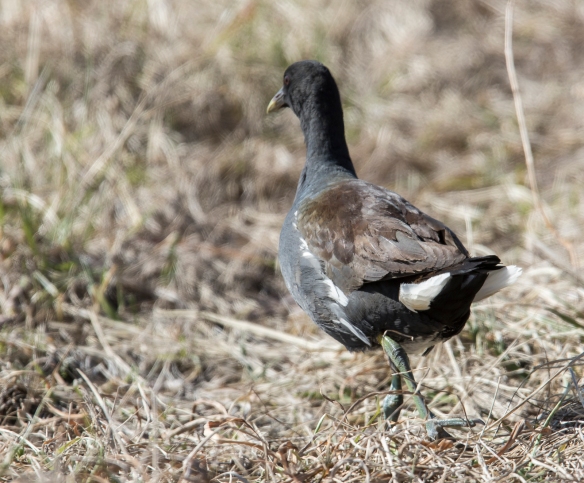 A common gallinule was mixed in with the coot near the observation platform. These relatives of rails look similar to coots (especially this juvenile) but can be distinguished by the white stripe along each side, their habit of flicking their tail, and the lack of lobes on their especially long toes. Known to breed in isolated locations in our state, the common gallinule is fairly rare in winter, and this is the first I have seen at Mattamuskeet this year.

Great egret showing off its plumes 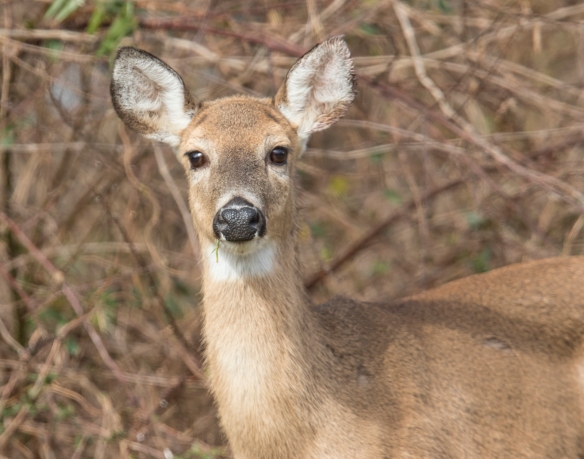 The high water had closed the far end of Wildlife Drive, but we got great views of a showy great egret and several deer before turning back.

Skim of ice in the swamp along New Holland Trail

We stopped for a short hike along New Holland Trail, one of my favorite spots at Mattamuskeet. Extremely high water and a skim of ice gave the swamp a very different look from my last visit a week ago. I love it when there is ice down here…a different world with new artistry everywhere you look.

Tundra swan lounging in the impoundment

Driving along the back side of the impoundment we watched thousands of ducks lift off when an eagle flew overhead. Another American bittern was standing along the edge of the marsh, and swans, coot, and ducks were feeding in the shallows as the sun started to dip toward the horizon. Then my phone chirped that sound it makes when I get a text message. I glanced at it…a local number, but I didn’t know who…it read least bittern on entrance road!! Whoa, I said, let’s go….but there were cars in front of us, stopping to look at swans and ducks…we waited…another text…where are you? Our volunteers told me you were around. Now I knew, it was my friend, Keith, who works at the refuge. One of the volunteers from the office had apparently spotted the bird, told Keith, and then mentioned that I was at the refuge (we spoke at the visitor center earlier in the day). Keith knew I would be interested in this bird because we had talked about it when someone saw one a few weeks ago. So, thankfully, he texted me with this news while he was photographing it on the other side of Wildlife Drive. A least bittern is not something I see very often. In fact, I have only seen two in all my years of wildlife watching. 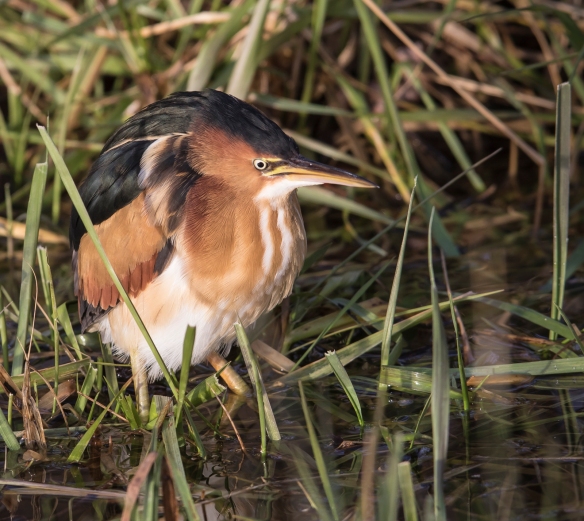 Least bittern stands like a statue along the water’s edge

When we finally got over there, I saw Keith out with his camera. We got out, and there it was, in perfect light, standing right next to the road, motionless, like a piece of yard art. What a beautiful bird! I am guessing this is a male because of the dark head and back.

Like their larger cousins, least bitterns have an intense, piercing gaze

Least bitterns are one of the smallest herons in the world, standing only a little over 12 inches tall when stretched out, much smaller than its bulky cousin, the American bittern. The least bittern is usually more difficult to see, because of its small size and its preference for thick vegetation. These diminutive herons often walk through thick marsh vegetation (like cattails), not by wading, but by grasping the grasses with their long toes and striding through the narrow openings between the upright blades, literally sneaking through the grass above the water. This little guy was not bothering with stilt-walking, but was instead on the ground next to some standing water.

It grabs a small killifish

Keith and I crawled around on the edge of the road trying to get a good angle for some photos, while the bittern stood still. It finally moved its head, then went into classic bittern feeding mode. Within a minute of staring at the water, and slowly stretching out and downward, it struck and grabbed a small fish, gulping it down with a quick snap of its beak. 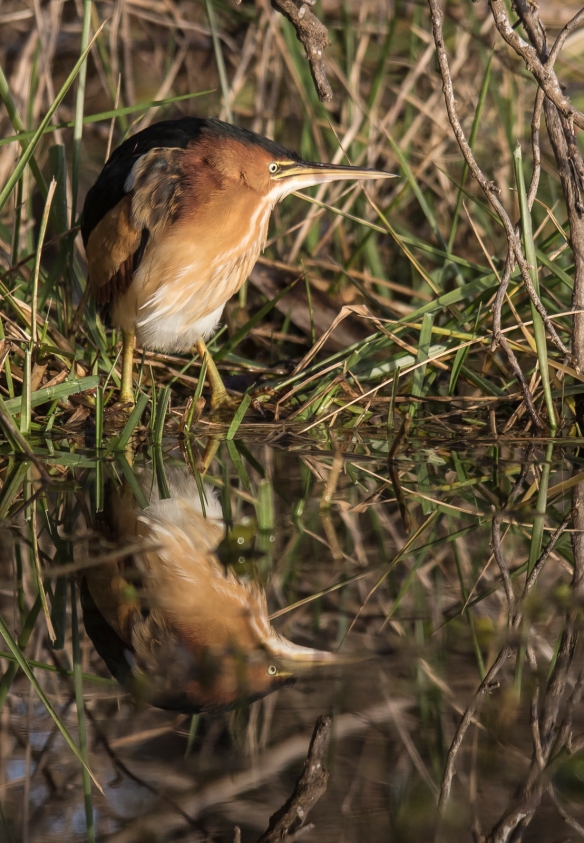 A fine way to wrap up a winter season

I would love it of this bird decides to stick around and nest somewhere in the vicinity. The young bitterns, like many young herons, are fine examples of punk feather-do birds, and I would enjoy a chance to photograph them. Odds are slim though, as they usually hide their nests fairly well in thick marsh vegetation.

The trip ended the next day with icy conditions, muddy roads at Pungo (including a large section closed due to flooding), and relatively few sightings at Pungo (although we did manage some species we did not see at Mattamuskeet –  wild turkeys, a snipe, two cooper’s hawks, a sharp-shinned hawk, and a great horned owl).

It has been another very good winter season. While I am sorry to see the swans and snow geese starting to depart, I have many memories to fall back on. And the shifting season means new life just around the corner…spring wildflowers, calling frogs, migrating warblers, and so much more. I can’t wait…and I will back to the wildlife refuges to see what they offer this spring and summer, so, if you are interested in a trip, just contact me.