Any glimpse into the life of an animal quickens our own and makes it so much the larger and better in every way.

I’ll just say it…I love being around the swans at Pungo. There is something magical about these birds and every winter I find myself drawn to them and wanting to spend time in their elegant presence. While the snow geese tend to provide more of a spectacle with their huge noisy flocks swirling overhead, the swans of Pungo are a constant in winter, providing the musical score for a play I have seen hundreds of times and yet continue to find fascinating.

A flock of swans returning to Pungo Lake at sunset

There are an estimated 100,000 tundra swans in the Eastern population. Most breed in northern Alaska and then migrate 3000 or so miles to spend the winter along the East Coast, with about 70% spending much of their time in North Carolina. And one of the best places to observe them is the area around the Pungo Unit of Pocosin Lakes National Wildlife Refuge.

A swan with landing gear down

The birds start arriving in November and will stay through much of February, roosting at night on large bodies of water like Pungo Lake and Lake Phelps, and flying out to surrounding agricultural fields during the day to feed on waste corn and winter wheat. Adult swans weigh 15-20 lbs and have a wingspan of over 5 ft, so they are easy to spot as they go about their daily routine. For the past several years they have found the managed impoundment along West Lake Road at the Pungo Unit to be to their liking and it has provided a great spot for swan watching. So that is how I spent almost a full day last week, standing next to a dead snag  and observing swans (it helps to try to blend in with your vehicle or something like a tree to reduce your human form and put the birds a bit more at ease – they tend to swim away or take flight if you are out of your car walking around near them). Below are just a few of the hundreds of photos I took of a day in the life of these majestic waterfowl. 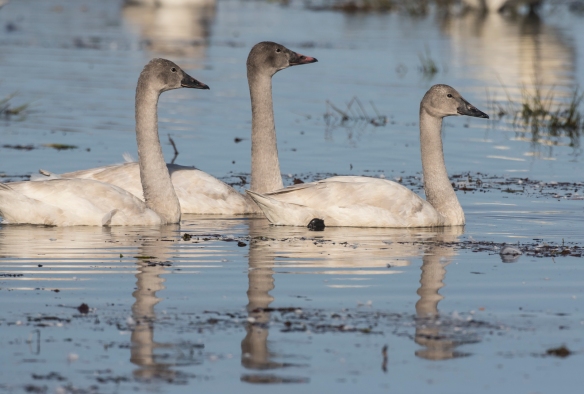 It looks like it was a good year on the breeding grounds as there seem to be more juvenile swans this year. Juveniles follow their parents to the wintering grounds and can be distinguished from the adults by the gray plumage on their head and neck, and patches of pink on their bills. 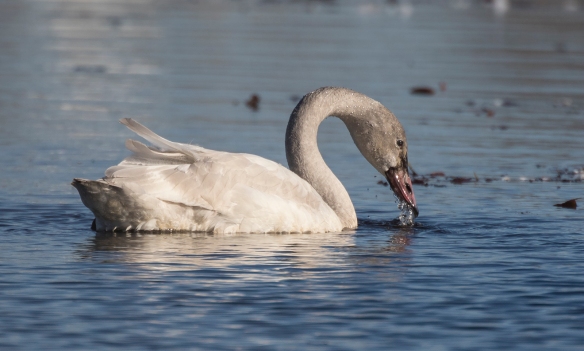 Juvenile swans tend to stick pretty close to their parents on the wintering grounds, but you occasionally see one off by itself, like this one that was picking at some aquatic vegetation. There is so much commotion on the water that I wonder how they all manage to find and stay with each other.

While the swans give the initial impression of being regal and serene compared to the huge flocks of boisterous snow geese, at times they can actually be quite aggressive towards one another. These agnostic interactions often start with adult swans giving a distinctive trumpeting three-syllable call – oo-ou-oo.  This is usually accompanied by a forward-leaning outstretched neck.

A pair moving in to challenge another pair of swans

It can then escalate to a wing-quivering display. 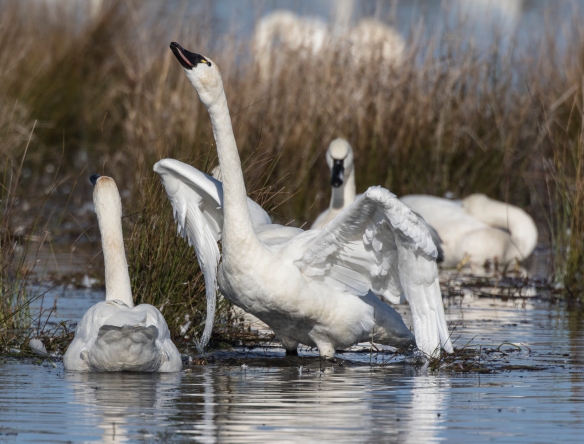 These threatening displays probably help avoid actual physical interactions that could lead to injuries. It seems more often than not, that one of the interacting groups often backs down in the face of these threats.

Fights and bites do occur

But fights do occur…and when they do, it can be quite impressive as the huge birds flail with their wings and bite each other until one group has been vanquished.

Fights involve a lot of wing beating and splashing

Combatants can even become airborne

Most fights are over quickly with no apparent harm done. It’s hard to tell what all the fuss is about…most likely territory or personal space. I often saw a preening swan get chased off of a small clump of underwater vegetation that seemed to provide a platform on which to stand. I guess a place to stand in water world is something of a premium. Studies have shown what you might expect from these aggressive encounters – larger groups tend to dominate in fights; larger swans (most often males) tend to dominate smaller ones; and juveniles almost never win (I rarely saw them even get involved in fights except some nips with other juveniles). 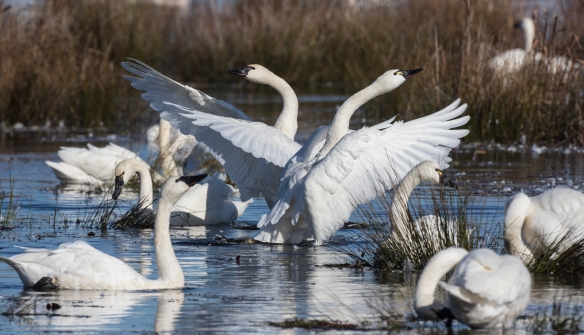 Following an aggressive encounter, group members often engage in another bout of wing-quivering and calling, which is sometimes called the triumph ceremony. This is similar to the display given when family members reunite. After a successful bout, there is often a wing flap by one or more of the group members (usually the victors, but occasionally even by the defeated swans). The wing flap is certainly one of the more striking behaviors these magnificent birds can perform, as they tend to rise up and flap 3 or 4 times, exposing amazing “sculptural details” in their wings.

Swans bathe by dunking their head and body under the surface 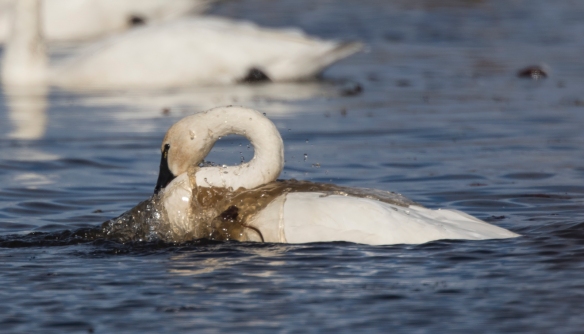 They often preen and do a wing flap after bathing

Swans often also do a wing flap after a nice long bout of preening and bathing.

The start of a wing flap

It begins with a slight raising of their breast, and then a full extension of the body and neck.

The wing extension is dramatic

Every feather on the wings looks extended during a wing flap 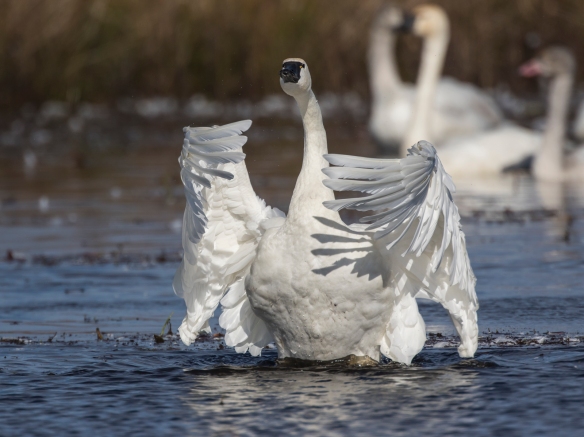 Needless to say, I tend to snap way too many images of swans flapping their wings. Most of my pics have another swan partially obscuring the flapping bird, or the wing-flapper is facing the wrong way. But, I apparently can never get enough of these images as I keep trying every year to get that “perfect” wing flap. 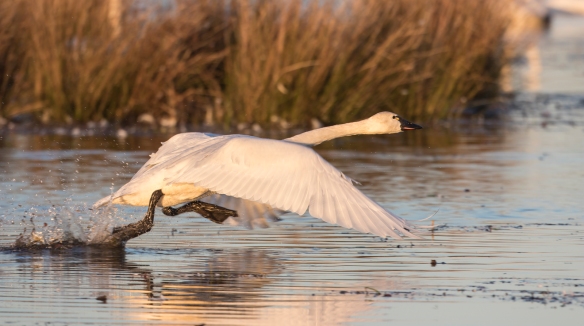 Swan running across the water to get airborne

Another swan sound I love hearing is the slap, slap, slap of their huge feet hitting the water surface as they run and flap to take off. It is tough to get a decent photo of one as they are invariably in a crowd of other birds, but they do usually give you a “heads-up” so you can prepare yourself for the shot. Swans typically will swim a short distance with the direction of the wind, and then turn into the wind before taking off (for greater lift). They also do a series of head-bobs (or quick head-pumps) that intensify and get more frequent right before they raise their wings and start running across the water. Many of the swans I was watching in Marsh A took off less than an hour before sunset, presumably to feed in the fields for a little while before returning to the safety of open water for the night.

Swans, like most birds, preen extensively to help keep their feathers in good shape. If they weren’t squabbling with their neighbors, they were preening or resting during much of the time I spent with the flock.

With so many feathers, it takes a lot of time to keep them looking good

It seems that tundra swans have a lot of feathers to keep up, more than most birds, in fact. The number I keep seeing in various sources is about 25,000 feathers on a swan, compared to 14,000 for a Northern pintail, 7,000 for a bald eagle, and around 3,000 for an American robin. No wonder that preening seems to be the primary thing the swans are doing during the middle of the day. 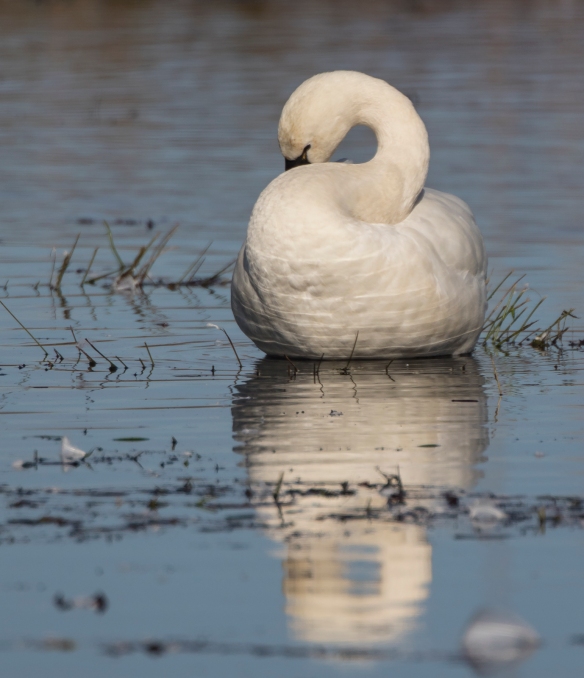 The elegance of a tundra swan

A swan’s long neck, white feathers, and jet black facial markings give it an air of elegance. To watch and listen to tundra swans for a day is a privilege and is a certain way to help you feel connected to the natural world, and realize that there are things in this world more beautiful, wonderful, and important than anything you see on a screen or read in the news. I am always thankful for the opportunity to renew my optimism and recharge my batteries by spending time with these majestic creatures.

Keeping an eye on me

9 thoughts on “Standing with Swans”