There are no seven wonders of the world in the eyes of a child. There are seven million.

We had a wonderful holiday break this past week, spending time with and enjoying both families. The past few days we discussed some of the varied rituals of the holidays – specific foods for the season, making cookies with family, watching certain shows, listening to Christmas music, and Christmas Eve Mass. I guess I have a few rituals myself, although they are quite different from most. 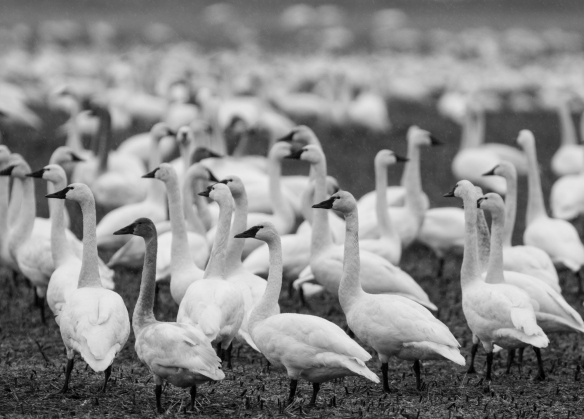 The weather for much of our Christmas Bird Count was cold, gray, and wet (click photos to enlarge)

Yesterday was one of my favorites – the annual Audubon Christmas Bird Count at Pungo. The count has been going on since I started it with my friend, Paris Trail, back in the mid 1980’s, and I have only missed a few in all those years. The count center is based at Pettigrew State Park and the standard 15-mile diameter circle encompasses all of the park (including 16,000+ acre Lake Phelps), acres of the surrounding farmland, and much of the Pungo Unit of Pocosin Lakes National Wildlife Refuge.  The weather turned out to be less than ideal with cloudy skies, various forms of precipitation, and temperatures hovering around 37 degrees most of the day. We drove the refuge roads for much of the morning as we were starting to question the sanity of our 4:30 a.m. departure from a warm bed back home. Though we ended up with fewer species than usual, we did share a few special moments with some of the usual suspects.

Apparently, there was a lot to discuss at the swan holiday gathering

On one of our circuits, we noticed several thousand tundra swans had gathered in the front fields to feed on waste corn and a nearby field of winter wheat sprouts. We pulled up, lowered the windows with rain sprinkling in, and took in the scene. Watching and listening to the swans somehow made it all worthwhile and reminded me of how much I love this place.

A large flock of snow geese landing to feed

Soon, scattered flocks of snow geese began to gather and circle the feeding swans. As the flocks coalesced into a huge swirl of black and white, we discussed the seeming inefficiency of snow goose behavior – circling a field for many minutes, using up precious energy, before finally settling down to feed. All the while, I was glassing the passing flock for the smaller cousins of snow geese, the Ross’s geese.

It is fairly easy to spot a Ross’s goose on the edge of a flock of snow geese in a field – Ross’s geese are about 1/2 to 2/3 the size of all the other white birds and have a stubby bill that lacks the black “lips” of a snow goose. But I like to try to spot them in flight, which can be a bit more challenging. If the the two species are adjacent to one another, you can see the differences (even though Melissa thinks I am making all this up). 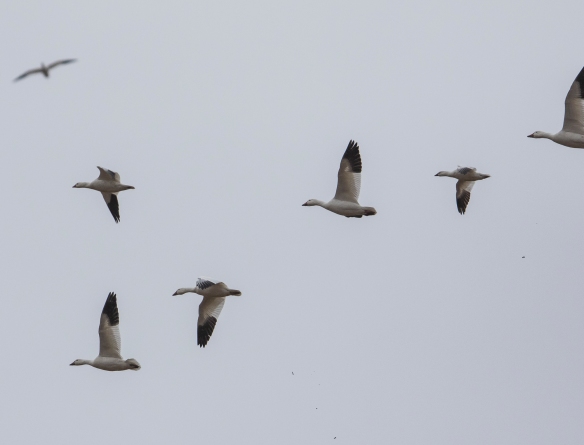 Can you spot the Ross’s geese in this photo?

Check out the photo above. There are two Ross’s geese mixed with 4.5 snow geese – remember, look for the smaller size and a short, stubby bill on the Ross’ geese. We ended the day with 7 Ross’s geese and about 30,000 snow geese (I’m sure there are a many more Ross’s geese on the refuge, but it can be tough to pick them out of the large flocks).

A few other species were quite abundant this year – American robins by the hundreds, mallards, killdeer, and yellow-rumped warblers. These winter warblers are tiny balls of energy and they boldly surrounded us every time we pished along the forest edges.

Searching for American pipits in corn stubble can test your vision (how many do you see?)

I enjoy the challenge of finding certain species on these bird counts – a Ross’s goose hidden in a flock of thousands of snow geese, an elusive fox sparrow (no luck this year), an owl (we did flush a single great horned owl while walking in the woods), and the dirt-colored American pipits hidden in plain sight out in the plowed or cut fields (we found a nice flock in one field).

And there are always surprises. This year, the bald eagles put on quite a show. We started the morning with four in the fields as we entered the refuge. Later, in our one spot to view Pungo Lake, we had ten eagles in view, often taking turns knocking one another off of perches along the lake shore.

Our biggest surprise came with a quick sighting of a red wolf as it dashed across a dirt road and into a corn field, quickly disappearing into the dense stand. It turned out to be a very good day for mammals – white-tailed deer, river otter, nutria, a gray squirrel, and six bears rounded out our observations (along with plenty of huge bear scat as well as scat from bobcat and fox). 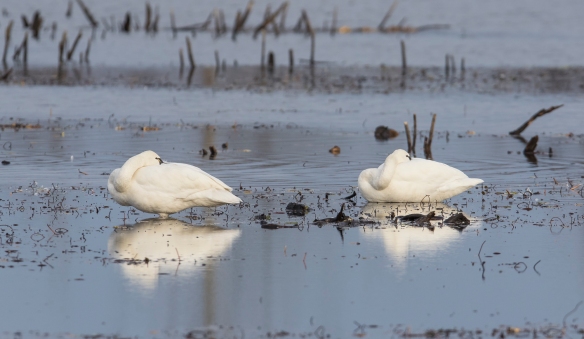 The sun finally made an appearance lat in the afternoon, warming these resting swans

Late in the day, the cold rains stopped, the dense clouds moved out, and the sun broke through, but the steady wind reminded us that this can be a very cold place. Walking on “Bear Road” at the end of the day reminded me of so many trips from my past – a sense of wildness and wide open spaces in this place that continues to provide natural wonders with each visit. The bad weather had driven most other visitors away, so we had the place to ourselves – again, a reminder of the the early years when, if I saw one other car on the refuge, it was a busy day.

The golden glow of an approaching sunset illuminated the woods and caught the feathers of swans returning to the safety of the lake for another night. The only sounds were those of nature – swans calling, the deep drumming of a distant pileated woodpecker, the faint low hoot of a great horned owl.

A fiery end to a chilly day

As we walked back toward our car, the western sky exploded in fire like it so often does here in winter. There are so many reasons I love this place. A big one is that it allows me the time and space to look around and appreciate the many wonders this world has to offer, if only we give it the chance. Help support our public lands – they are medicine for our souls.

There are many wonders in our world, just waiting for us to pause and enjoy

6 thoughts on “Counting Our Blessings”