Things are not always what they seem; the first appearance deceives many…

You may have noticed some long lapses in my blog posts. These past few weeks have been busier than usual, not so much for work, but for personal reasons – a wedding and honeymoon trip to Yellowstone (more on that soon). This post hails back to the couple of days after our wedding and the day before we headed to our favorite place (that “Y” park). One of the joys of living out here in the woods is being able to watch all sorts of wildlife in the yard. Chipmunks are a favorite of mine, so I was distressed when I went out one morning and saw a dead one lying on the walkway to the front door. I immediately blamed the neighbor’s cats (someone down the road has 4 or 5 outdoor cats that have been seen here in the yard a few times). I went over and inspected the victim – no obvious chew marks or injuries, but when I picked it up (I was wearing work gloves) I noticed some fur slid off quite easily, exposing a patch of skin. I told Melissa about it, fuming over the harm to wildlife done by outdoor cats, but speculated that another possibility was that a copperhead had bitten the chipmunk and was waiting for it to die before trailing it to dine.

I tossed the dead chipmunk over in the woods, determined to discuss this with the neighbor. A few minutes later, I was walking down the driveway, looked over, and saw a copperhead on the walkway where the chipmunk had been. I usually try to move copperheads from inside our deer fence (they seem to like to lie on our walkway, unfortunately) but this one quickly scurried into the thick vegetation when I tried to lift it with my homemade snake stick. Hoping to lure the snake back out, I retrieved the chipmunk and placed it back on the walkway. About 10 minutes later, I walked by and noticed the chipmunk was gone!

I walked over and saw a slight movement in the vegetation along the walkway…there was the copperhead starting to swallow its prey. 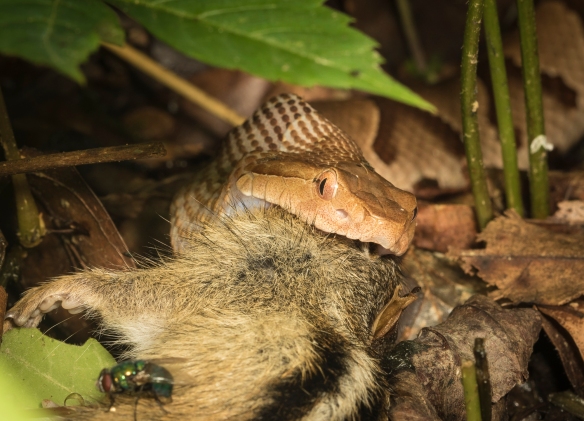 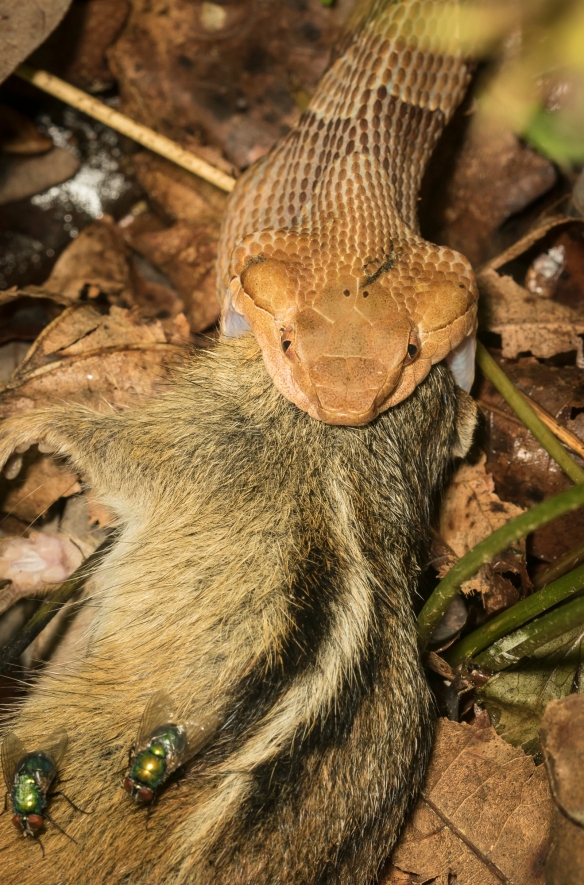 Note the flies on the carcass

Our friend, Jeff Beane (Museum herpetologist), discussed copperhead behavior in an article for Live Science back in 2014. In it, he described copperheads as being “mobile ambush predators.” Mostly, they get their prey by “sit-and-wait ambush”; however, they sometimes do hunt, using their heat-sensing pits to find prey. Primary prey includes mice and other small rodents, birds, lizards, small snakes, frogs, salamanders and certain large insects (especially cicadas and large caterpillars).

For small prey, copperheads will strike and hold the victim until it dies, and then swallow. For prey that presents a possible danger to the snake (like a rodent that could bite or scratch), it will strike, inject venom, and recoil quickly, allowing the victim to wander off. The venom breaks down blood cells and leads to circulatory collapse. The snake then trails the prey using a behavior known as SICS (strike-induced chemosensory searching). This involves searching movements of the snake’s head coupled with an elevated rate of tongue-flicking. A snake’s tongue collects particles in the air, and inserts them into its Jacobson’s organ in the roof of its mouth. Receptors then send a sensory message to the reptile’s brain. Research suggests that copperheads primarily track the scent of the envenomated tissues after a strike rather than just the scent of the prey itself.  I managed only a few photos before the snake pulled its meal back into the cover of the plants. I was amazed to see what I assume were several blowflies already on the carcass in way less than an hour from when I assume the chipmunk died. These flies seek out dead animals to lay their eggs on, where their larvae serve as important decomposers. A lot can happen just outside your door when you live in the woods!

9 thoughts on “Guilty, or Not”