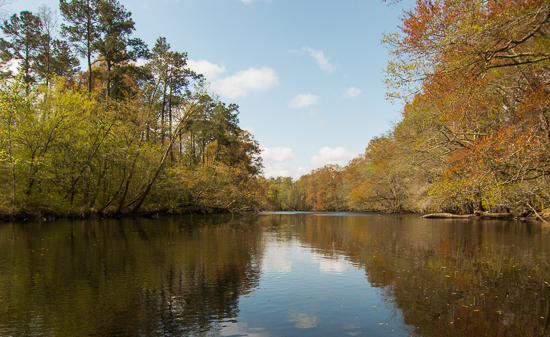 Last week, my friend, and former co-worker, Jerry Reynolds asked if I wanted to go along with he and another friend on a paddle along the Black River as he prepped for an upcoming program. I jumped at it since it has been years since I paddled the Black (I did go upriver last year in a power boat, but that is a very different experience).

The Black River originates in Sampson County and runs about 65+ miles before joining the Cape Fear. It is characterized by meanders, oxbows, artesian springs and mature swamp forests. The waters are clear but are stained a dark tea color due to tannins leached from decaying vegetation.  The water clarity allows you to see emerging aquatic vegetation and the sand bars as you drift along in the current. These make an interesting backdrop for the dark reflections of the forest and sky. Because of the good flow, the presence of so many artesian springs, and the relatively undisturbed nature of much of the waterway, the Black River is designated as Outstanding Resource Waters by the state.

The clear, dark waters allow glimpses of submerged vegetation and sand bars as you paddle.

The Black was not always the quiet stretch of dark water it is today. Commercial activity on the Black River began over two hundred years ago with the transport of timber, cotton, and livestock. In the mid-1800’s there were numerous steamboats moving products up and down the river (hard to imagine given the shallow nature of the river today). But the advent of railroads and roads caused the river traffic to all but disappear by the early 1900’s. The Black was then left to the owls, ducks and the occasional fishermen and hunter. After 100+ years of relatively little human disturbance, the Black River is now one of the finest examples of coastal swamp forest in the southeast. Many landowners and conservation groups have recognized this and miles of the river shoreline are now protected through the efforts of groups like the NC Nature Conservancy. 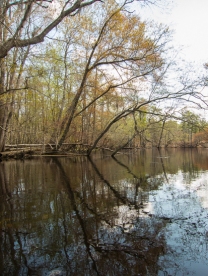 The Black River is wide in spots.

We arrived yesterday morning at Henry’s Landing along Hwy 210 and unloaded gear and then transported one vehicle down to the take out point at Newby’s Landing, a distance of approximately 10 river miles. We launched into the tea-colored waters a little after 10 a.m. The river is fairly wide at this point and there was a slight current. Almost immediately, a beautiful cypress swamp surrounds you on both sides of the river, hinting at the grandeur to come. A short ways downriver we flushed a few Turkey Vultures and then passed under others with wings spread, soaking in the morning sun. To someone more suspicious than I, this might be a bad omen as we enter the swamp.

The sky was Carolina blue with a few puffy clouds and the banks were starting to reveal the palette of colors that trademark the arrival of spring in these forests – the lime green of emerging cypress and gum, the light orange-red of oaks, and the occasional splash of white flowers from a riverbank hawthorn (probably Parsley Hawthorn, Crataegus marshallii).  I heard a few calls from some swamp warblers fresh from their wintering grounds – the zeeeeee-up of Northern Parulas and the sew-sew-sew-sew-sew-sewEE of a Yellow-throated Warbler.  But spring has just arrived, and the only other warbler I saw was a Yellow-rumped.

Leaf out along the Black River comes in a palette of colors (click to enlarge).

The first reptile was a large Brown Water Snake. This was the first of many such snakes we encountered. Brown Water Snakes are large-bodied snakes easily identified by their pattern of dark brown blotches down the middle of their lighter brown back. These blotches generally alternate, but do not connect to, dark blotches along the sides of the snake. These are the snakes you often see sunning above the water on limbs or trunks of fallen trees, sometimes as high as 15 feet. If a paddler goes under one and startles it, the paddler might get startled by a snake dropping into his or her boat, something that has happened to me only once in all my years (but once is enoughJ). Unfortunately, watermen who think it is a venomous cottonmouth often kill this harmless snake.

Brown Water Snake sunning on a limb over the river (click to enlarge).

About 5 miles downstream from Henry’s Landing it looks as though the river disappears. The main channel seems clogged by logs and vegetation as it bends to the left. The Jerry’s holler “follow us” and off through a maze of tiny channels they paddle, dodging cypress knees and tupelo gum saplings. This is the start of the famed Three Sisters area of the Black River. One story has it that in the days of commercial boating there were three distinct channels in the swamp area of the river, hence the name “The Three Sisters.”

Now, this area is best known as the home of the oldest documented trees in the eastern U.S.  As part of a dendrochronology study in the southeast, researchers from the University of Arkansas cored several large Bald Cypress trees in the area in 1985 (core sampling does not seriously harm these ancient cypress). One tree turned out to be over 1700 years old. The researchers estimate others may be over 2000 years old, but cannot be accurately aged since most are hollow, making them impossible to properly core. Soon after this discovery, the recognition of the national significance of this stand of trees gave rise to efforts to preserve the forests along the Black River. 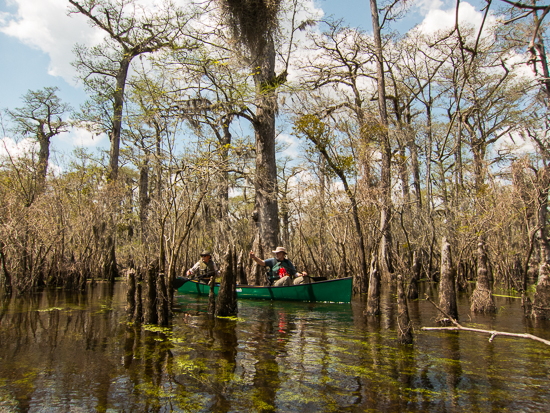 The current picks up a bit as the “river” breaks into a series of braids and weaves through dense vegetation. Jerry says the water level is good and we may be able to paddle the whole way instead of getting out and wading with your boat as he has often done. Seems to me this is an easy place to get lost, but they both say you just keep following the current and you’ll find your way out (although I notice they are both frequently checking their GPS units). I hear squawking off to my right and spot a Great Blue Heron standing on a nest with what must be very young chicks begging for food. Soon, large trunks of cypress and an army of cypress knees engulf me. Huge gray trunks hold flattened tops of cypress at a level that seems a bit too short for their size, as if they had hit an invisible ceiling. These are the ancient ones, the trees well over 1000 years old. I know I am in a special place. We all just sat in our boats, taking in the view that surrounded us.

After spending several minutes with the ancient ones, we pushed and paddled our way along with the current until we hit what resembled a small channel which gradually lead to a bigger channel and finally something that looked more like a river. As we continued downstream, several side channels joined us, making me wonder how anyone can find their way to Three Sisters if they paddled upstream.

Last night when I returned home I read an article by Dr. David Stahle, one of the researchers who discovered the antiquity of these incredible trees. He helped me understand some of what I felt while in the swamp…

“In many areas along the Black it is possible to turn in a circle and see 10 to 20 bald cypress trees over 1,000 years old.  This density of millennium-old trees is rare in any forest worldwide.  Although a dozen or so species can live for more than 1,500 years, most of these old growth stands have very few individual trees in the oldest age class.  Not at the Black River.  There are literally hundreds of millennium-old trees at the Black River, which has the largest concentration of ancient bald cypress trees we have ever found after 30 years of searching in the southeastern United States, Mexico, and Guatemala. “ 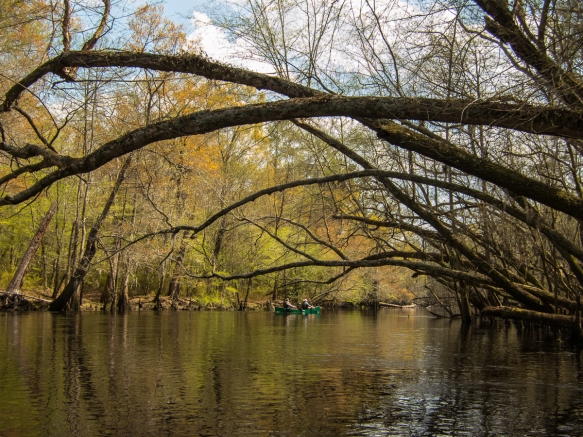 Nearing the end of our paddle (click to enlarge).

Although the wildlife diversity on this day (17 species of birds, three species of herps, and several butterflies and freshly emerged dragonflies) was not what I had hoped, it was still an incredible paddling experience. The feeling of isolation and of the beauty of an unspoiled swamp populated by ancient trees is something that will draw me back to this magical place again.