One of the changes I’ve noticed in the 25+ years I’ve been going to Yellowstone is an increasing number of Pronghorn in recent years. It used to be that you saw them mainly around the Gardiner area, but now they have greatly increased in numbers across the northern range, especially in Lamar Valley and Little America. Although the genus name, Antilocapra, means antelope and goat, Pronghorns are neither. They’re the only surviving member of a North American ungulate (hoofed mammal) family. 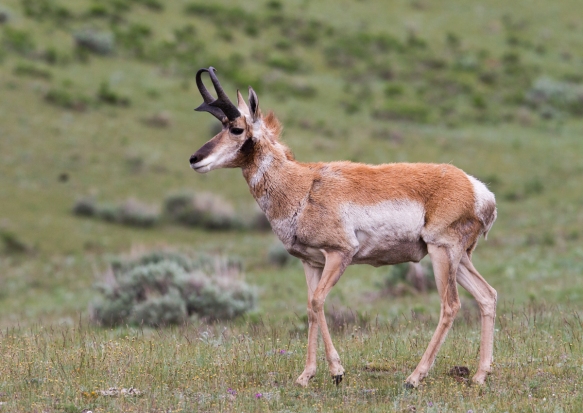 These graceful animals get their name from their unusual horns. Both male and female Pronghorns have horns, but only the males have the distinctive prong the juts forward halfway up from the base. Males can also be distinguished by their black cheek patches, absent in females. The horns consist of a bony interior attached to the skull covered by a black keratinous sheath.  The sheath is shed annually like antlers. Male Pronghorns use their horns in competitions during the rut and may deliver serious piercing stabs to their opponents.

Pronghorns are well-known as the fastest mammal in North America, able to reach speeds of over 60 mph and sustained speeds of up to 40 mph.  They are also one of the fastest mammals on Earth – one reference said a Cheetah could outrun a Pronghorn in a short sprint but a Pronghorn would quickly pull ahead as the Cheetah tired. Pronghorns may have evolved this running ability to escape the now extinct American Cheetah, and adults can easily outrun any of the modern-day predators they encounter. They can run across a football field with as few as 10-12 bounds in as little as 3 seconds. Pronghorns have several adaptations that allow them this speed. Their heart, lungs and trachea  are several times larger than similar sized ungulates; their blood is rich in hemoglobin; and their long legs have light-weight, yet strong, leg bones. 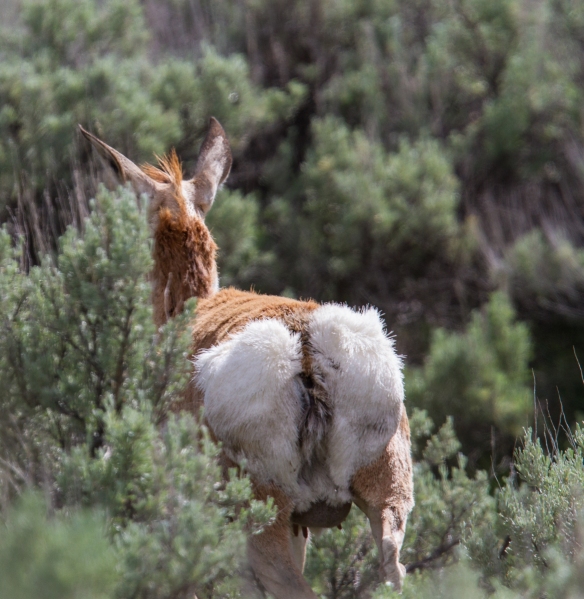 They have several other adaptations that enhance their survival in open country. The hairs on their light-colored fur are hollow, and can be controlled to lie flat and provide a protective shield against wind and water, or selectively raised to allow heat to escape. The bright white hairs on the rump can be raised and serve as an alarm signal that can be seen from great distances, much like the warning flag tail on our White-tailed Deer. 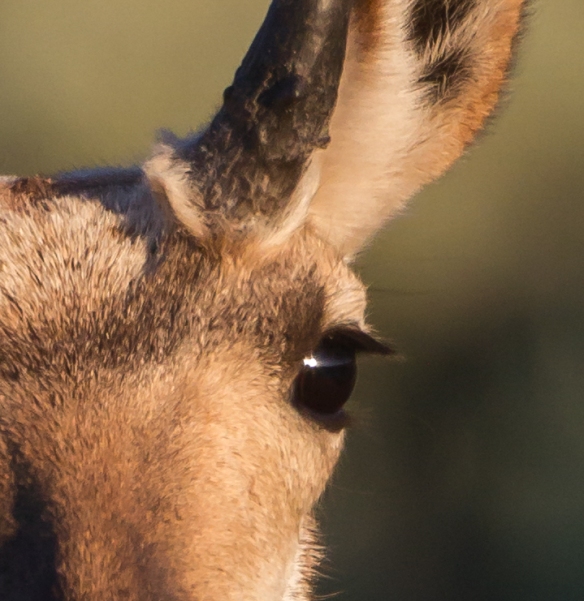 A Pronghorn feature that is quite noticeable are their large dark eyes with what seem like very long eyelashes. It turns out the long eyelashes help protect their eyes from the intense sun in their open habitat. When a pronghorn looks at you you really notice their large bulging eyes on the sides of their head.

They have the largest sized eye of any North American ungulate in relation to their size with each eyeball measuring about 1 1/2 inches in diameter (about the size of the eye of a horse). The size and placement of their eyes gives them over a 300-degree arc of vision without moving their head, a useful trait for detecting potential predators at great distances. One reference said a Pronghorns’ vision is equivalent to that of a Peregrine Falcon and they may be able to detect movement up to 4 miles away. 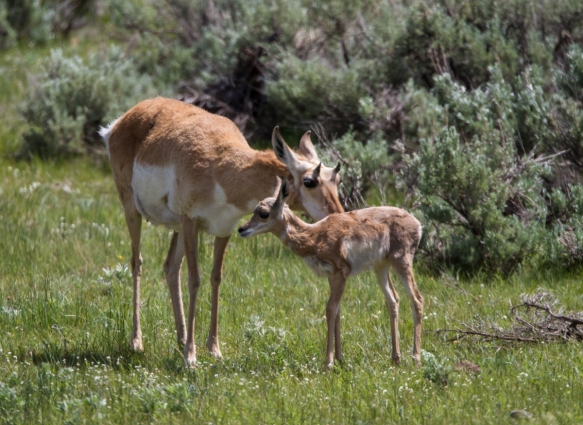 Pronghorns may once have been almost as numerous as Bison on the Great Plains. Their numbers were greatly reduced by over-hunting and by fences placed throughout their range, blocking their migration routes. While numbers in the West have increased through conservation efforts, there is still concern over the relatively small population of a few hundred Pronghorns in Yellowstone. Hopefully, ways can be found to protect the  Pronghorn migration routes to their wintering grounds outside the park so that future visitors can enjoy these incredible icons of the northern range. 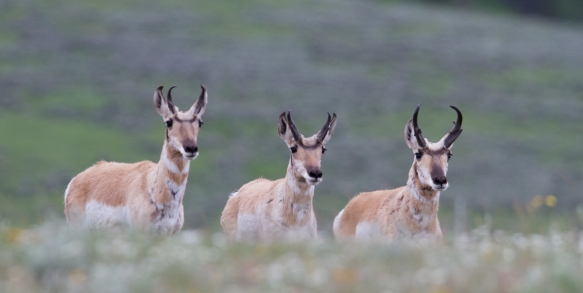 Pronghorn bucks looking over a ridge 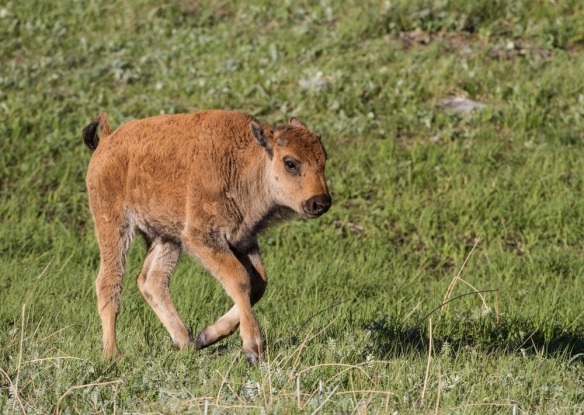 It is spring in Yellowstone and there are babies everywhere, especially bison calves. Cute and frisky are the best words to describe these orange-furred bundles of energy – not the usual naturalist terms, but appropriate for these guys. And it has been a very good year for bison births – every herd has dozens of calves either frolicking or sacked out in the grass. And the sounds of being close to a herd are amazing – grunts and snorts, bawls of the calves, and even the munching of grass when they are close to your car.

And there’s the promise of yet more babies to come. I’ve seen several pregnant pronghorn and mule deer. And then there are the nests – a bald eagle nest, a golden eagle nest, an osprey nest, and I’m sure many more yet to be discovered. 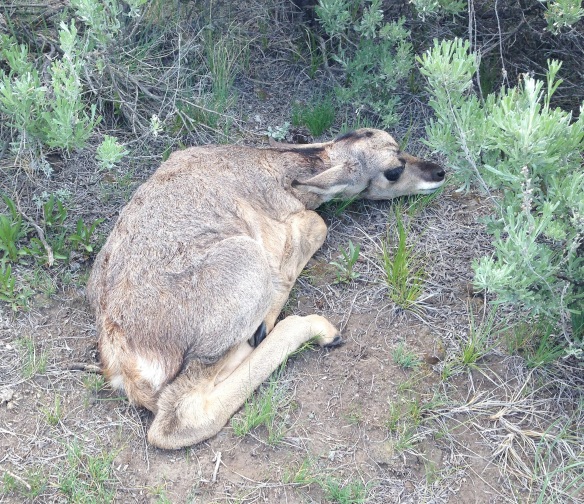 But the most amazing thing I’ve seen was a pronghorn fawn. I just walked out onto a small hill to take a look at a distant bison herd. I didn’t even have my camera with me because I was only 20 yards from the car. But I looked down and right at the edge of the sage was a young pronghorn fawn doing what its’ instinct tells it to do – lie perfectly still to avoid predators. I took one quick picture with my phone and moved away so as not to disturb it. I looked around when I got back to the car and I could see two pronghorn females about 100 yards away, one of them undoubtedly the mother. In a week or two that little pronghorn will be able to run and avoid many of the predators out here in Lamar. Until then it will need to rely on camouflage and it’s relative lack of scent to avoid detection. I wish it well.