Two friends from the Museum, Megan and Melissa, invited me to tag along with them yesterday, as they did some fieldwork for a future workshop. Megan made a great find as she and Melissa were turning over logs at the edge of a vernal pool, looking for salamanders – some viable Marbled Salamander eggs. It seemed really late to us for this species to still have viable eggs (when she looked closely, she could see the well-developed embryo moving inside the eggs) so she grabbed a couple to photograph.

Marbled Salamanders have an unusual reproductive strategy compared to many other species in that the eggs are laid in the fall (usually October and November in this area). The female often scrapes out a little area near or at the edge of a vernal pool.  Vernal pools are fascinating and important habitats that may be dry much of the year and then fill with autumn and winter rains. The key is they have no fish, which makes them critical habitats for a number of species of amphibians, invertebrates and other animals. She then will stay with the eggs for some time (often a month or more) waiting for the water to rise so the eggs will hatch. If it remains dry for an extended length of time, she may abandon them and return to her underground burrows in the nearby woods until the next breeding season. Studies suggest that egg clutches where the female remains with them until they are covered by water have a higher offspring survival, perhaps because she helps protect them from predation or getting too dry. 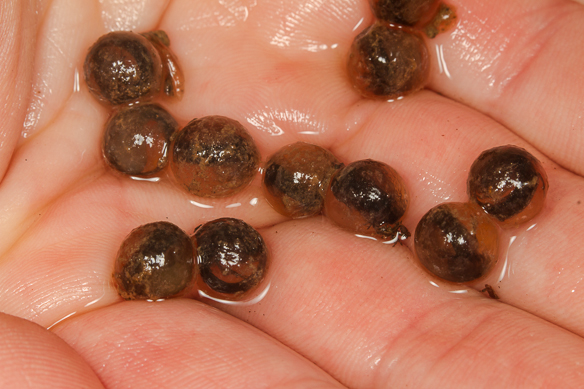 The 50 or 60 eggs Megan found were under a log at the edge of a large vernal pool. It was very moist under the log but the standing water was still a few inches away from the eggs. Embryos develop to the hatching stage within a couple of weeks after being laid, but do not hatch until covered by rising water. So these eggs were very well developed. You can see the front legs and feet, the larval gills, some of the diagnostic lateral spots, and the eyes in the waiting “larvae”. My salamander reference (Salamanders of the United States and Canada by James W. Petranka) states, “when covered by water the embryos become oxygen stressed…this triggers the release (from hatching glands on the snout) of digestive enzymes that dissolve the egg capsule and allow the embryo to escape”. Amazing!

We put a couple of eggs in some water in a bug box so I could photograph them. Megan called Jeff Beane, a herpetologist at the Museum, and told him about the find. He said he did not recall seeing any viable eggs this late in the spring so he wanted to document the location. We walked down into the woods to show him, photographed the eggs and then walked back to the car. In those 40 minutes or so, the two eggs had hatched. The reference said it usually takes a few hours to a couple of days after flooding for the eggs to hatch. Guess these guys had waited long enough. The last picture is one of a larva from last year that I pulled from another pool. It was much older and larger than the ones from yesterday.