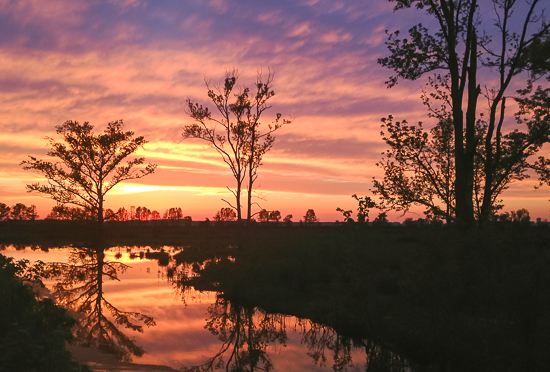 This weekend I decided to get back to my favorite North Carolina wildlife area – Pocosin Lakes National Wildlife Refuge. When I first started going there back in the early 80’s, it was known as Pungo National Wildlife Refuge and it was centered on Pungo Lake, an important wintering area for waterfowl. In the early 90’s the refuge added over 90,000 acres and changed the name to Pocosin Lakes National Wildlife Refuge (although I still often refer to it as just Pungo). I usually make 10 or more trips a year to the refuge, most in winter when the thousands of wintering waterfowl provide an unsurpassed wildlife spectacle. But in the past few years I have enjoyed visiting in the warmer months to see another side of this unique area. On this trip I was hoping to see and photograph some of the Black Bears that are so abundant at Pungo. The weather was perfect – crisp air and very still. It was obvious that the storm the previous night had dumped a lot of rain as the fields contained standing water and the often-problematic dirt roads were still a bit slippery.

I looked for wheat fields, as I know that bears love to graze on wheat. The refuge has an agreement with local farmers who plant hundreds of acres of refuge land with crops (mainly corn, soybeans, and winter wheat) and in exchange they leave a certain percent for the wildlife, especially the wintering waterfowl.  No bears yet in the small amount of wheat on the refuge so I kept driving to check out more areas.

I pulled over at one of their managed marshes and got out to see if I could see or hear anything. There were a couple of late American Coot, a Greater Yellowlegs, and a Great Egret. I then heard a clucking sound a few feet from me in the marsh grass, but I couldn’t see anything. It sounded like a bird – I was guessing some sort of small rail. It moved away so I assumed it might be an alarm note and I had disturbed it.

Then, from farther out in the marsh, came a sound I knew only from audio recordings – the bizarre mating call of the American Bittern.  It reminds me of the sound of large bubbles in the office water cooler.  I was amazed to hear one call, then another, and another. Three bitterns calling, and I could not see any of them. They kept calling back and forth and I kept looking, but no luck on spotting the callers, although I did see four bitterns fly into the marsh during that time. Surprised to see so many bitterns in one small marsh, I did some research online that night and found a great web site for this type of information – Birds of North Carolina (http://www.carolinabirdclub.org/ncbirds/accounts.php). It says that bitterns are most numerous in our state during migration (in April and May for spring migration). Below is a pic of one at Mattamuskeet from last winter, when they are not nearly as abundant. 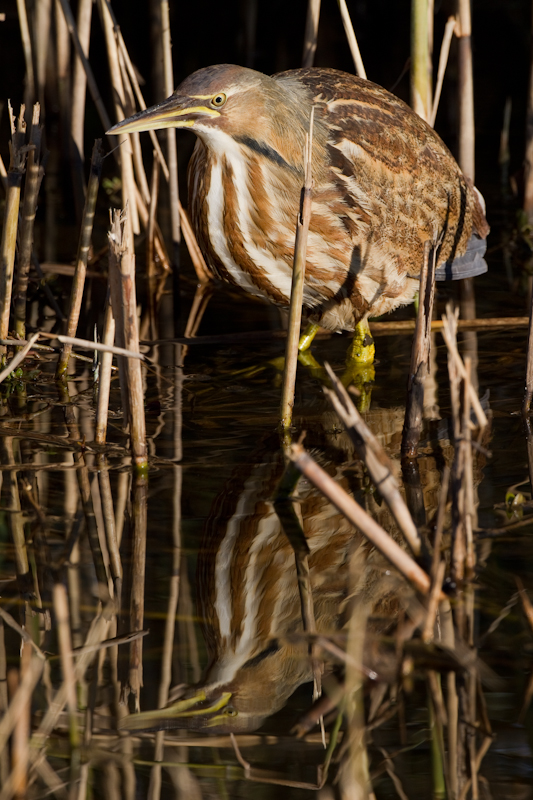 After about an hour of enjoying the scene, I decided to go look for what I had come for – bears.  I could see two bears out in the wheat fields but I drove to North Lake Shore Drive (aka Bear Road – before they had road signs on the refuge I made up names for some of the more memorable ones) to see if any were out in that usual hot spot. As if on cue, one bear came out of the woods a few hundred feet beyond the gate.  But there is no wheat in the fields along Bear Road this year so I went back to the other location and now there were six bears out feeding.  It was still overcast and the bears were over one hundred yards away so not a good photo opportunity. 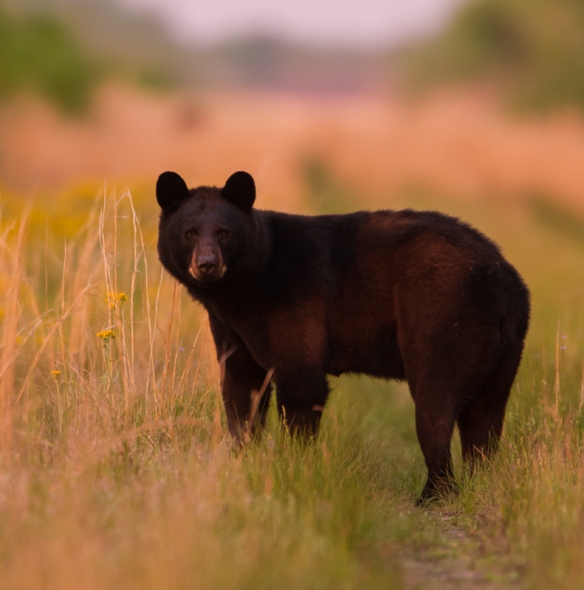 I drove a little further and saw a bear silhouette down a grassy side road – this one has been dubbed New Bear Road since it tends to produce bear sightings almost as regularly as the original Bear Road (I know, not very inventive names).  And, as luck would have it, just then the sun dipped below the cloud cover flooding the area with a golden light that looked like it would last the 15 minutes or so until sunset. So, I grabbed the camera and scrambled down the side road. The bear was so busy eating grass that it never looked up. I was able to get close enough for a couple of shots before the sun set, Turns out there was another bear off to the side of the road and they both gradually ambled away as I headed back to the car.

The next morning started off with a beautiful sunrise and the unusual site of a pair of opossums mating at the edge of a cornfield (more on that in a later blog).  The wind picked up and after driving slowly around the Pungo Unit for an hour I had managed only one bear butt, so I decided to head for Mattamuskeet National Wildlife Refuge about 30 minutes east. By the time I got to Mattamuskeet, the wind was howling and there just were not many birds or other critters to be seen. I got out and walked some of the short boardwalks and experimented with the camera on my iPhone. 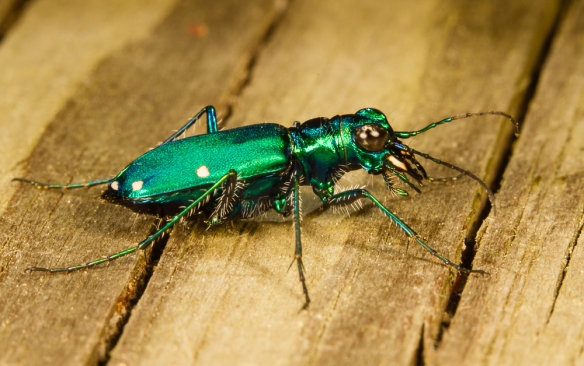 At one point I crawled around on my belly on a boardwalk for about 30 minutes “chasing” several Six-spotted Tiger beetles, hoping to get a close-up of these beautiful beetles. And this was after I had been checked by the federal game warden who thought I was acting a little suspicious! Turns out they have problems with people illegally collecting snakes and other critters on the refuge for the pet trade, etc. and when he saw me driving slowly along the road and getting out to look at things in the bushes, he thought he better check it out. He was a very nice guy and it is good to know there are people out there keeping an eye on things. 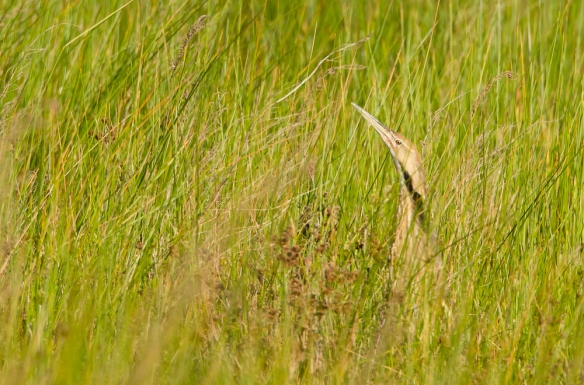 Returning to Pocosin Lakes I went straight to the bittern marsh determined to find one of the callers. The wind may have subdued them a bit but I finally had two calling in front of me, one off in the distance and one so close yet invisible that it was over-the-top frustrating. Finally I found one – the one off in the distance at about 50 yards. After watching his behavior, it was even more excruciating that I could not find the close one, who could not have been more than ten yards from me. The caller was standing upright in the marsh, turning his head from side to side, then he would lower his head, giving the clucking sound a few times, and then launch into the water cooler call and with each “bubble release” he would snap his head up and down rapidly with bill wide open.  He repeated this 3 to 5 times and then returned to the upright stance. The closer bird must have been behind the one tall clump of mash grass and remained invisible.

Having satisfied that goal I debated whether to stay and try to capture a picture of the close one if he ever moved, or go try for bears. The wind was still blowing hard but it was from a good direction as far as getting close for some possible bear photos so I decided to give it a try. I parked at the start of new bear road and hiked in about a mile to the edge of the wheat field. The bears were coming out of the woods into the field and I positioned myself at the boundary of the two in hopes of getting them crossing over. Ironically, I sat next to a large bed that had been scooped out of the side of the dike by a bear. I then waited (which is what a lot of wildlife photography is about)…and waited. One bear had made it into the field before I got settled, but for the next hour, only one deer and a Bald Eagle came close.  When I checked the wheat field, there were now four bears in it – three had managed to come in at the far end of the woods where I could not see them from my low position. 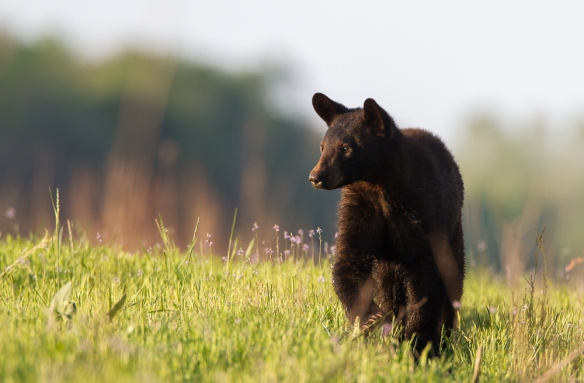 Then I saw one headed my way. It was a youngster from last year. Soon a sibling joined this bear and they began running around and playing, then back across the dike into the wheat field (which was out of my view on the other side of the dike, so in order to check it, I had to slowly stand up and look over). 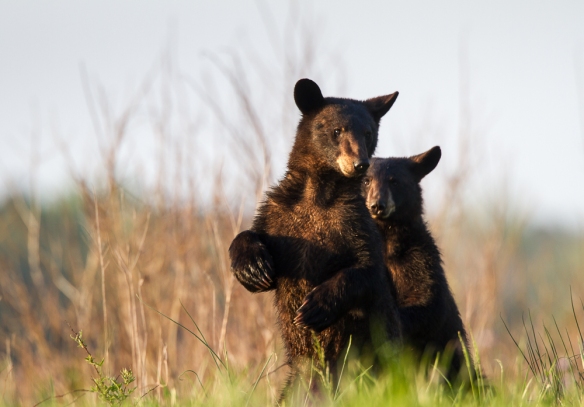 One young bear tries to stand and look around, the other wants to play (click to enlarge)

The young bears came back. One was curious about either my shape or the camera shutter noise and would stand and look in my direction but its playful sibling would jump on it every time it started to stand. Then they would amble back to the wheat field and continue to play. For the next 30 minutes I had bears crossing back and forth on the dike from woods to wheat field. I was about to leave when a larger bear (still not a huge one by Pungo standards) came walking down the dike toward me. As he approached, he kept looking in my direction and finally decided something was not quite right. He slowly turned and ran about fifty feet, and then with one more glance back at me, went down into the wheat field for dinner. 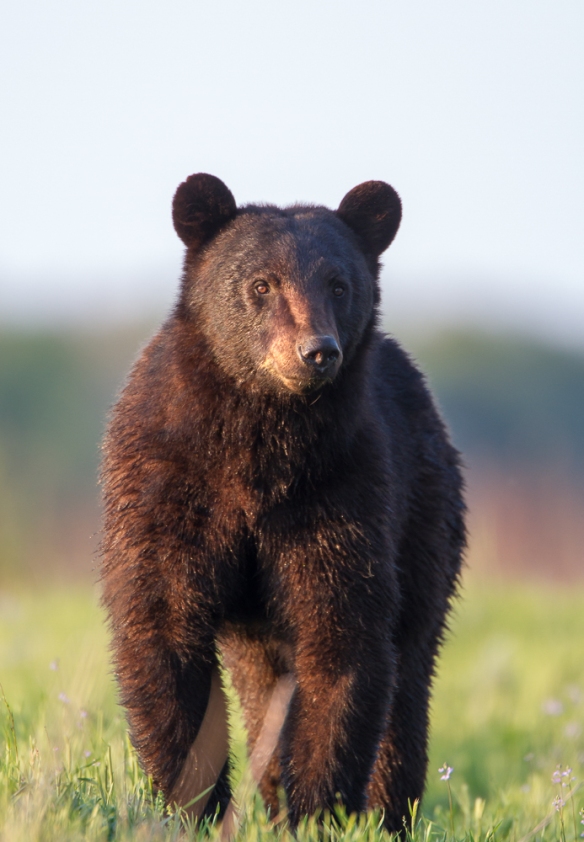 Last Black Bear of the evening (click to enlarge)

As I crouched and walked away I glanced back at the wheat field. There were all six bears out feeding in the golden light…simply beautiful. My goal is always to get a decent image without disturbing the wildlife. That is sometimes easier said than done. Tonight, the wind was in my favor and it allowed me to get close enough and yet the bears could not smell me. While they seemed curious a couple of times, I don’t think they were ever really spooked.  I really like sharing wildlife encounters with people, but it is difficult, if not impossible, to provide a group with the type of experience I had yesterday. The good news is it is possible to give people a great experience in a place like Pungo by allowing them to see bears and other wildlife through binoculars and spotting scopes. I have been lucky enough to do that for the past 30 years and I look forward to sharing more experiences in these special places in the years to come.  But getting close-ups of wildlife often requires lots of patience, the right gear (in this case a long lens), a little luck, the right environmental conditions, and sometimes, just being out there alone so you can blend in and become part of the landscape.

More information on the refuge and their public events can be found on their web site, http://www.fws.gov/pocosinlakes/, and on the web site of their support group, the Friends of Pocosin Lakes, http://www.pocosinlakesfriends.org/.

2 thoughts on “A Spring trip to Pungo”