View down my power line

Despite the heat and humidity, I decided to take a stroll down the mowed path underneath the high voltage transmission line that borders the property where I live. This area has an interesting mix of grasses, shrubs, and small trees and contains a diversity of animals and plants not usually found in my woods. This diversity intrigues me and has made me realize the importance of power line right-of-ways as habitat. These areas stretch for miles across our state, are a minimum of 200 feet wide and have limits on what can be done in them in terms of buildings. My conservative estimate is that there are at least a couple hundred thousand acres of transmission line right-of-ways in NC which makes their area as large as that protected in the entire NC State Park System (currently about 218,000 acres when you add the acreage in all state parks, recreation areas, natural areas, state rivers and state lakes). That is a lot of early successional habitat! I decided to let the area near me grow up this year and keep a mowed path through it to reduce the tick and chigger quotient when taking a walk. Here are a few of the things happening now…

The Butterflyweed, Asclepias tuberosa, is in bloom. The flowers of the wild plants here are tinged with more red color than the ones I have in my garden, which are more pure orange.

Horsenettle is in bloom in both my garden and the meadow. This thorny, weedy relative of tomatoes and potatoes is toxic and produces an orange-yellow fruit later in the season.

This dainty little butterfly is fairly common throughout much of the state. The larvae feed on various members of the legume family and secrete a substance favored by ants, which in turn provide some protection for the larvae from potential invertebrate predators. 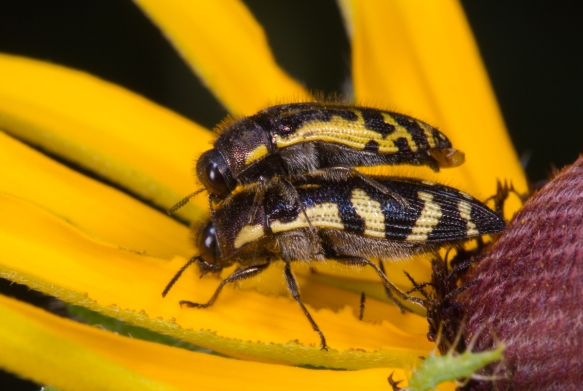 These Metallic Wood Borers are feeding on the flowers of Black-eyed Susans. Larvae tunnel through wood of various tree species.

This looks like an early instar of a the variable Yellow Bear caterpillar.

A common dragonfly in our area, Blue Dashers can be seen perched on the tips of twigs and vegetation near any type of water. They often perch with their wings cocked forward like this female.

One of my favorite spiders, this small Green Lynx will grow to be a large, efficient predator by the end of the summer. These spiders do not build webs to catch prey but rather stalk and pounce like their namesake big cat. They are frequent predators of bumblebees and wasps when they are mature.

This colorful Leafhopper is one commonly referred to as a Sharpshooter. The name has many possible explanations – their piercing-sucking mouth parts leave tiny holes in vegetation like miniature bullets; these insects produce droplets of liquid as they feed which they rapidly and forcibly expel; their rapid hiding behavior when approached is similar to a sharpshooter in the military hiding behind tree trunks and other obstacles when approached by the enemy.

A tiny nymph of a Leafhopper (probably a Sharpshooter).

Look for future posts on the diverse flora and fauna of the meadow beneath the lines.